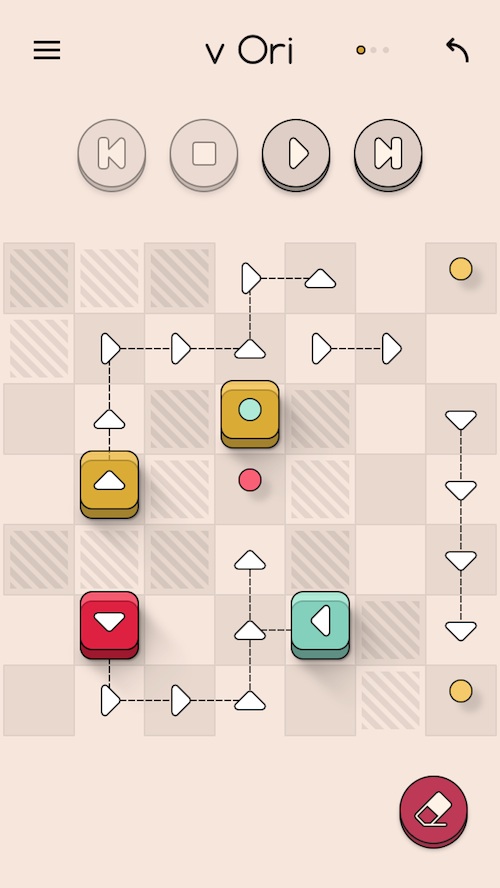 I am a big fan of minimalist puzzle games, as you may have noticed by the number of reviews I’ve done for iDB. As much as I love them, I’m also not particularly good at them. It always takes me a while to get the hang of the rules and I will oftentimes get stumped on a level with no idea what to do next.

Perfect Paths is one of those games that stumped me pretty fast. The first dozen or so levels are fairly easy, but once the controls get more complex, so do the solutions. I like getting stuck, though. It always makes me feel more triumphant when I solve a puzzle. Check out my game review of Perfect Paths…

Each puzzle consists of a board with checkered spaces on it. Depending on your level, there are two or more colored blocks with a corresponding dot somewhere on the grid. Your goal is to push the block to its matching dot within the least amount of moves possible.

To move a block, drag your finger from it and across the grid along a path. When you cross a space, an arrow will appear that shows you which direction the block will move. For example, if you draw a path from a red block, first upward and then to the right, you will see the number of arrows pointing upward, followed by the number of arrow pointing to the right.

You can change the direction of an arrow before continuing the gameplay by touching the designated square and dragging your finger slightly (within the square) in the direction you wish to change.

When you’ve created a path from each block to its matching dot, tap the play button to watch the action unfold. If you’ve made a perfect path, each block will end up in the right spot and a check mark will appear on top of it.

If you made any mistakes, the blocks will remain on the board in play and you’ll have to tap the stop button to fix your mistake. 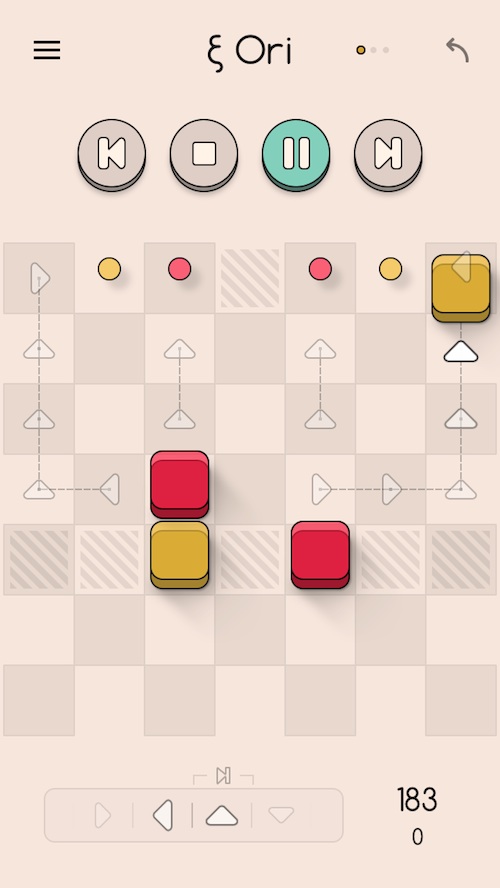 As noted above, the goal of the game is to get each colored block to its matching dot within the least number of moves possible. Early on, it is fairly simple to find the shortest path. However, as the game progresses, puzzles become more complex and reaching the destination spot can be a real challenge.

Create a path from one colored block to its destination dot. Then, do the same for the next color or colors. Then, tap the play button to watch the blocks move to their spots.

There are many issues that arise to keep you from finding a simple path. For example, blocks cannot cross paths. Each one follows whatever the arrow designates. So, if you have one block that you wish to send from left to right and another block that you wish to send from the bottom upward, you can’t cross their paths without splitting them, or one block will change direction in mid travel at the crossing point and end up where the other should have gone.

There are also obstacles that can get in the way of your perfect path. Shaded squares are like walls. You must go around them to get your block to its destination.

Blocks can push each other, which can be a benefit or a hindrance. Sometimes, the only way to get one block to its destination is to push it with another block. Other times, a block might be in the way and pushing it will only make it more difficult for the first block to reach its matching dot.

Oftentimes, blocks are on opposite sides of their matching dots and the only way to get to them is by crossing paths. When that happens, you must strategically plan how the two will move across the board so that one makes it off the others path.

For example, if two blocks must cross paths in order to move, one of them can be pushed out of the first path and onto a secondary one, where it will then move again along a different lane. Or, you can use the path splitter to send each one in a different direction.

Blocks move in a specific order of up, down, right, and then left. This means that, if it is time for blocks to move left along a path, only blocks that are supposed to go left will move. Then, all blocks headed up will go next, and so on.

This rule is beneficial when you get further into the game. By the time you reach Orion, the direction pattern becomes important to helping you solve a puzzle. I found myself stuck in Orion for a long time because I didn’t quite understand the concept and how it related to the movement of blocks.

If you make a mistake when drawing a path, you have numerous options for removing it. You can either tap the undo button at the top right corner of the screen to delete the move you just made. Or, you can tap the erase button at the bottom of the screen. When you open the erase tool, you can either tap an individual square to delete one move, or tap the trashcan button to clear the entire board and start over.

There are nine worlds, each with a new puzzle attribute to make solving it harder. New controls are added, which allow you to split paths and more. Each world has anywhere from four to nine levels. The game is updated regularly with new puzzle additions. 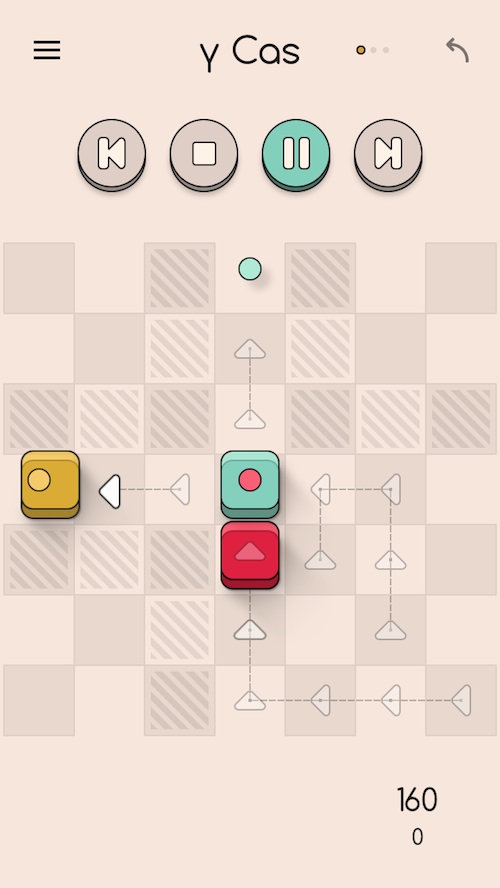 The levels get much more complex by the third world, making it a great challenge for fans of strategy puzzles. Although I’ve never played it, I’ve heard that it is similar to SpaceChem, for fans of that game.

I’d love a hint system. It got pretty difficult for me fairly early on. I like the challenge, but did find myself frustrated and put the game down for a break more than once.

Perfect Paths costs $3.99, which is a bit expensive for a basic puzzle game on iOS. The one thing that makes this game worth the money is that new levels are added on a regular basis. Four new levels were already added in the first week after its initial launch. The replay value is high because there are multiple paths that work, but the perfect one gives the highest score.

Fans of path management games will really enjoy the puzzle solving challenge that this game offers. It speeds up the difficulty fairly quickly, making it a great game for those looking to put their brains into overdrive. The price is high, but the game will be getting regular updates with new levels at no additional charge. So, if you want a game that offers a lot of content with no in-app purchase, this is what it looks like. The game is available on the iPhone, iPad, and iPod touch. Download it in the App Store today.

As I noted above, this game has been compared to SpaceChem. It is also a lot like Trappped, which is by the same game developer.

What do you think of Perfect Paths? Will you be adding it to your “Games” folder?