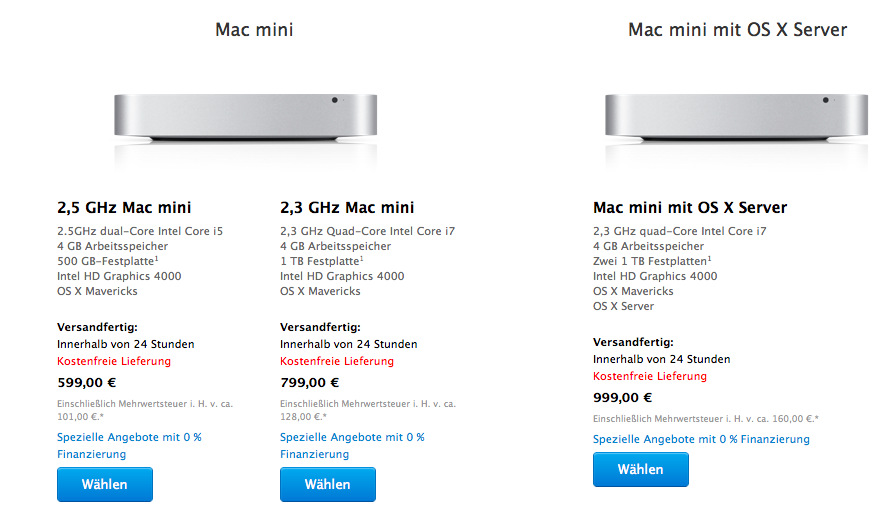 Apple is on a roll today. First it announced a $200 cheaper baseline iMac model, then we heard about slight Apple TV discounts across Europe and a lot deeper price cut on refurbished Time Capsule wireless base stations and now comes word that Cook & Co. have dropped prices of Mac mini models across key markets in Europe.

That’s right, our fans in Europe can now pick up a Mac mini for anywhere between €30 and €60 less (translates to approximately $40 and $82, respectively), depending on the country and model…

The Mac mini, Apple’s most affordable Mac desktop, appears to have received the deepest discount in Germany, where it now starts out at just €599 (see the top screenshot). Prices have not changed in the United Kingdom, where the entry-level model remains the same at £499. 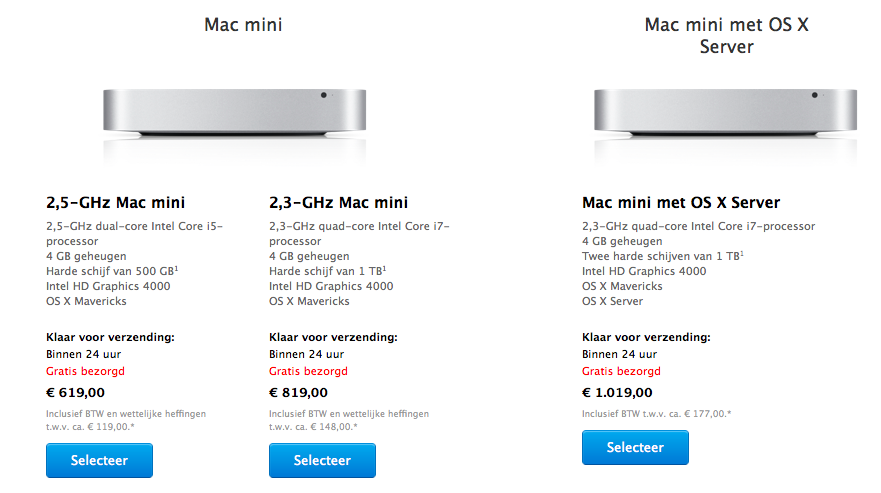 Other markets across Europe show a bit more modest discounts.

In the Netherlands, as evidenced by the above screenshot, customers are now paying €619 for the entry-level Mac mini model with a 2.5GHz dual-core Intel Core i5 chip, €819 for a more powerful 2.3GHz quad-core Intel Core i7 variant and €1,019 for the Mac mini with OS X Server edition.

Over in the United States, the two consumer models and the Mac mini with OS X Server still cost $599/$799/$999, respectively.

As I stated in the opening paragraph, Apple this morning has discounted the baseline 21.5-inch iMac model from $1,299 down to just $1,099 – if you don’t mind a slower processor/graphics and half the storage, that is.

And as noted by MacRumors, Apple UK also lowered the cost of existing iMac models.

The existing 21.5-inch models were lowered by £100, while the 27-inch models saw similar reductions of £150. The reduction appears to limited only to the UK with most of Europe and the US still selling the iMac at its original pricing.

In addition to the Mac mini, Apple’s Apple TV media-streaming device is now a £20 cheaper in the United Kingdom and a €10 cheaper elsewhere in Europe.

These price drops probably indicate that new models are arriving soon. The Apple TV and Mac mini were last refreshed in March 2012 and October 2012, respectively.

And if you don’t need 802.11ac Wi-Fi networking and are cool with pre-owned gear, the Online Apple Store is now offering the previous-generation factory-refurbished Time Capsule with a two-gigabyte hard drive for just $149.