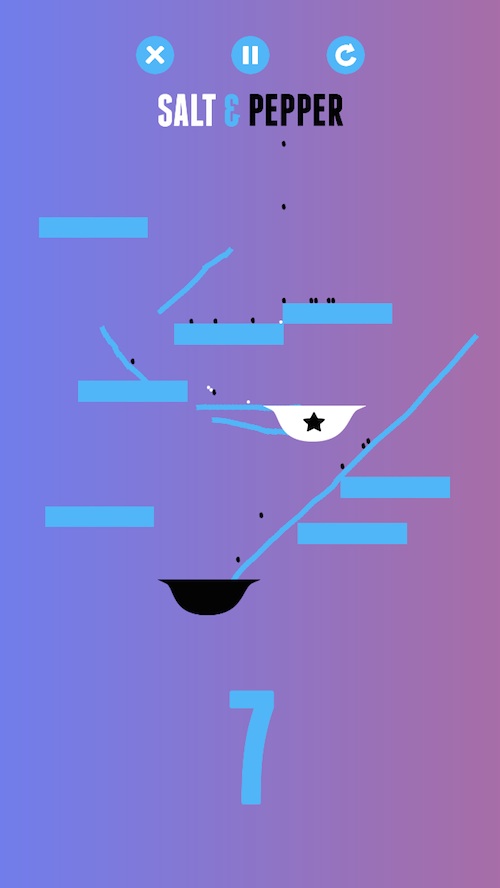 Most people mix salt and pepper on their food. In fact, someone should invent a container that holds both seasonings together so you don’t have to go through all those extra steps. It is very rare that you’d meet a person that keeps salt and pepper separate on their plate. However, this game requires that you separate your seasonings by filling them into bowls.

Salt & Pepper: A Physics Game is what it says, a physics-based puzzle game. Players must fill the black bowl with pepper and the white bowl with salt. However, when walls, blocks, and moving platforms block the pathway, getting the seasonings into their respective bowls is much harder than you’d think…

The game’s background is based in the flat, blurred iOS 7 look colors are light, but muted while the stark black and white objects in the foreground contrast the subtleness of the muted colors.

The objects consist of two bowls, one black and one white, plus a variety of blue platforms, spinners, and blocks. Players draw lines on the screen to create pathways to redirect falling salt and pepper. The lines appear in blue, as well.

Overall, the design is minimalist in nature as there are only a handful of simple objects in the foreground with a flat background. 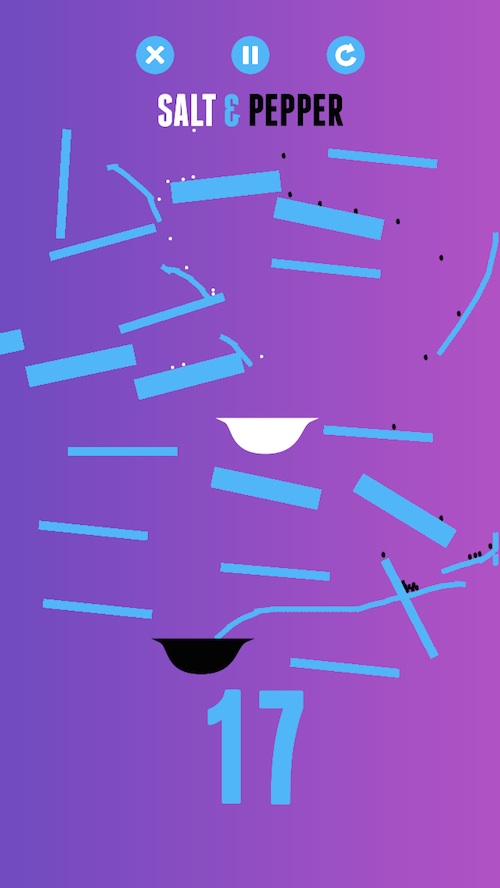 The “seasoned meat” is in the content of this game. It is a physics-based puzzler where players must figure out the best path to send the seasonings into their respective bowls. On some levels, the salt and pepper practically fall right into place. However, other levels are so difficult that it seems impossible to draw a path that will direct the grains into the correct bowl.

The salt and pepper fall from a designated area. The grains drop in regular amounts and never stop. You don’t have to worry about missing the seasonings. They will keep pouring from the sky until the bowls are full.

Your job is to redirect the falling seasonings into their bowls. To do this, you must draw a pathway that will allow the grains to find a way to their proper destinations. Touch your finger on the screen and drag it to a new location.

On some levels, creating the pathway is fairly simple. You can curve around a platform or make a couple of ramps by drawing them. Sometimes, if you just let the seasonings fall, they will fill the bowls themselves.

On other levels, the bowls are pretty much hidden underneath so many obstacles that it doesn’t seem like there is any way to fill them. However, with patience and ingenuity, you can overcome.

Once you get past level 20, a bouncing block is added to the mix. These obstacles can be a hindrance at times, but can also serve as a way to redirect the salt and pepper into their proper bowls. If you create a path that moves the seasonings underneath their bowls, the grains will still land inside. So, getting the path to first bounce off of a block below and into a bowl from the bottom will still score.

Sometimes, the salt and pepper shakers will be on opposite sides of their bowls. In many cases, you’ll have to fill one bowl before redirecting the seasoning into the other. Often times, you’ll be stuck trying to figure out how not to block one pathway with another.

At level 30, the game adds a new spice. Now, instead of only getting salt and pepper to their proper bowls, you must also get cinnamon to its proper bowl. To make thinks even more complicated, the cinnamon must first be created by passing salt through the cinnamon converter. Oh, pepper won’t work. It has to be salt. 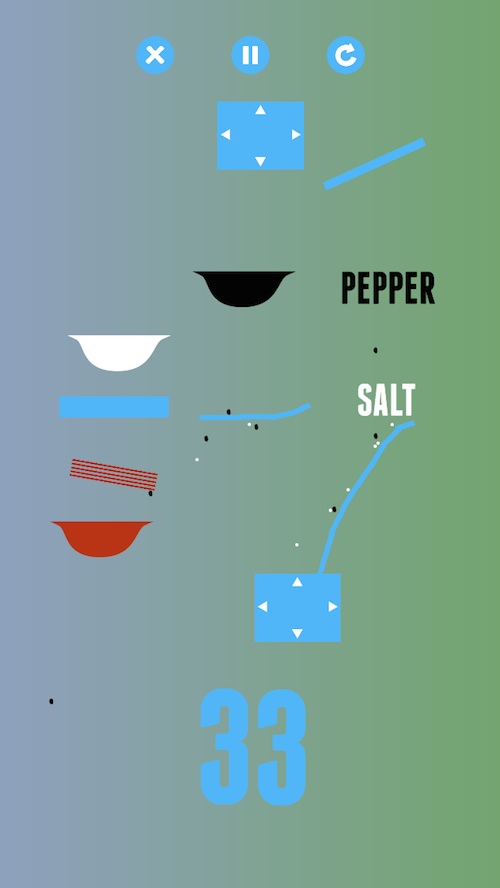 This game has a unique style. I’ve never played a game that required players to draw pathways to redirect objects to their final destination while avoiding obstacles along the way. However, it is still rooted in traditional physics-based gaming.

Even with the addition of new rules that make the game harder, it is still a bit too easy. I think it has something to do with the randomness of the falling seasonings. Just like in real life, they don’t always fall exactly the same. So, even if your pathway isn’t exact, you can still fill the bowls.

Salt & Pepper costs $0.99. Because the game is so easy to play, I think the price is just right. You’ll get through the entire game in about two or three hours. The replay value is reasonable since you can go back to levels you’ve completed over and over again. However, you don’t earn extra points for speed or accuracy, so there isn’t much reason to replay other than to earn achievements. The game’s developer promises more free and challenging levels in July, so you’ll get more bang for your buck soon.

I enjoyed this game. It challenged my skills at physics-based puzzles, even though some of them were a bit too easy. The price is as low as you can get without being free. It is a great game for passing the time while waiting for your coffee to be ready. I recommend it for fans of the genre, but don’t expect a hard challenge. It’s more of a relaxing experience. Download it in the App Store today.

Blek is a minimalist game that features drawing controls. Strata is a beautiful minimalist puzzle game.

What do you think of Salt & Pepper? Let us know in the comments below.