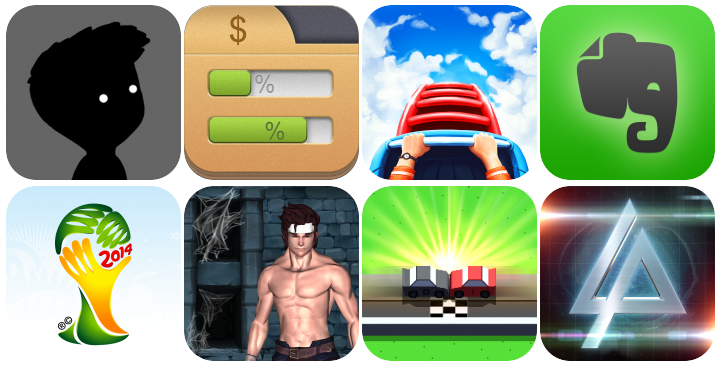 The sun is shining, the birds are singing and the weekend has arrived. Better yet, the fifth and final edition of App Recap is here. If you’re unfamiliar with this column, it covers the best new, updated and discounted apps for iPhone, iPad and iPod touch. Instead of endlessly browsing through the App Store trying to find the latest and greatest apps and games, leave the job to us. Read ahead for 10 apps to check out over the weekend…

Linkin Park Recharge – Wastelands is a fast-paced 3D action game in which the player becomes part of the Resistance, the last stand against the Hybrids. Explore the Wastelands in this old-school action game, challenging yourself with highly tactical gameplay and unlocking songs from the new Linkin Park album as you play. The game is $2.99 for iPad 3 and above.

Explore endless dungeons, dark castles and graveyards in Dungeon Raider: Infinite Run, a new game in the endless runner genre. Jump to collect ancient coins, potions and other artifacts, but make sure you avoid traps, zombie pits, knives and damaged roads. If you’re looking for a Temple Run spinoff, this game is free on the App Store for iPhone and iPad.

Swim, dodge and dive your hungry narwhal around tumbling ice blocks, eating as many fish as you can, in Glacier Rush. The new arcade-style game features one-touch controls, addictive gameplay, video replays, social sharing, unlockable achievements and more. Glacier Rush is free on the App Store, and is a universal app for iPhone, iPad and iPod touch.

We received an email this morning about an update to Nimbus Note, and it is worth sharing. The notes and to-do list app was bumped to version 1.1 recently with several new features: record voice and video notes, Fleksy keyboard support, to-do task priorities, double tap for edit notes and a bug fix for the clipboard. Nimbus Note is free for iPhone.

The official FIFA app has been updated to version 2.0 for the 2014 FIFA World Cup in Brazil. With the pre-tournament version of the app, you can keep up to date with all the latest World Cup news, discover the players and coaches from all 32 competing teams, plan a World Cup schedule, explore the host country Brazil and more. FIFA is free for iPhone.

Evernote was updated this morning to version 7.4.0. Evernote Business users can now access their business notebooks and published notebooks more easily, and checkboxes in notes are now easier to tap. Additionally, several business card scanning improvements were made, including the ability to capture the back side of cards. Evernote is free for iPhone and iPad.

iMoneyTracker is a simple and friendly financial management tool, allowing you to automatically organize and track your income, expenses, accounts and budget. Add transactions, view charts and reports and more. The app has gone free for a limited time, down from its regular price tag of $3.99. iMoneyTracker is free on the App Store for iPhone during the sale.

Uncertain of his sister’s fate, a boy enters LIMBO. The dark, disturbing game, the winner of more than 100 awards, has been discounted from $4.99 to $1.99 for a limited time. If you’re looking for a unique puzzle game with an interesting storyline and gameplay, look no further than this app. LIMBO will set you back $1.99 on the App Store for iPhone and iPad.

Hopefully you are able to kick back, relax and enjoy some of these new apps and games on your iPhone, iPad or iPod touch over the weekend. App Recap will return on Monday with a new selection of apps to choose from. If we’ve missed any important changes on the App Store today, let us know in the comments section below. As always, have a safe and enjoyable weekend everyone!