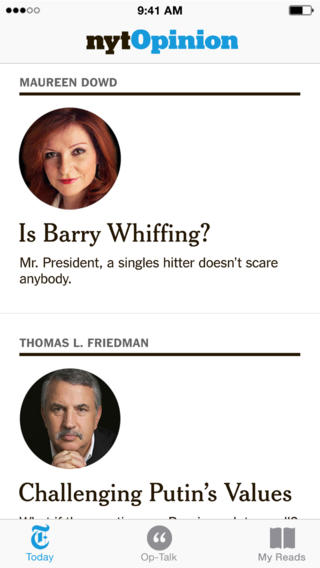 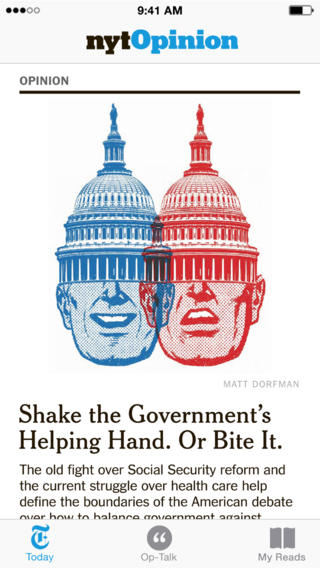 After launching its NYT Now app back in March with more affordable subscriptions, The New York Times newspaper this morning released another iPhone application in the App Store, as part of its doubling down on mobile and digital.

It’s called NYT Opinion and focuses solely on the paper’s opinion pieces, edited by former Reuters and Fortune editor Paul Smalera. The app is free to download in the App Store and comes with a $6 per month subscription…

For the first time ever The New York Times is offering unlimited access to some of their most widely recognized voices, along with new and expanded features, as a standalone subscription.

The app offers full access to the latest opinion articles from The New York Times and insights from influential columnists like Paul Krugman, Maureen Dowd, Thomas Friedman and Gail Collins, collated under the Today section.

And if you go to the Op-Talk section, you’ll find a curated stream of opinion pieces from other places. The app offers first ten articles free of charge, each month. After consuming your tenth article in any given month, you’ll hit a paywall.

Folks who subscribe to the paper’s digital/dead-tree edition or to Times Premier get to enjoy full access to the Opinion app free of charge. 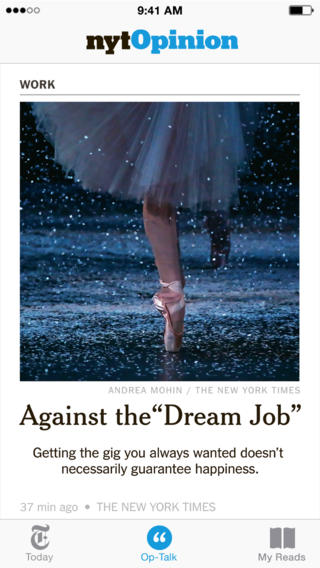 Due to the fast-paced nature of news today and the dreaded paywalls big media raise around their heavily reblogged articles, I decided a year ago to cancel my digital subscriptions to the likes of Wall Street Journal and The New York Times.

I’m glad I made that choice.

As a big proponent of free-of-charge news, I nevertheless must note that these types of stories have little value to them. Blame it on McDonald’s journalism as that’s basically what we have today.

On the other hand, I do value investigative journalism, longform writing and opinion pieces because such writing offers longer-lasting value versus daily news that gets old fast.

Taking it all in, I don’t think I’ll be subscribing to NYT Opinion unless the paper reconsiders its pricing scheme.

For the record, I’m an avid reader of The Loop Magazine, an iOS bi-monthly by veteran Apple blogger Jim Dalrymple, and am more than happy to support his endeavor by being an avid subscriber.