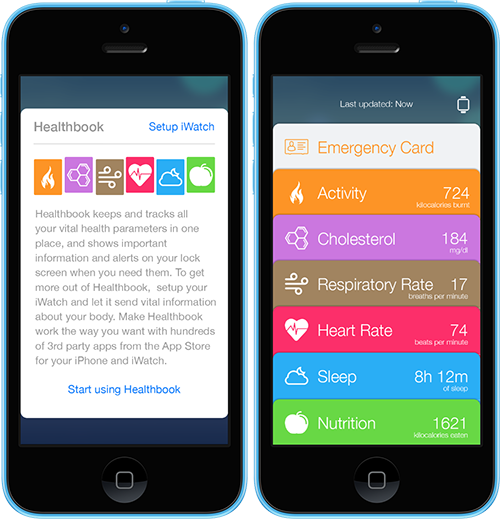 Apple is expected to unveil iOS 8 at its upcoming WWDC keynote in just one week. A number of new features and apps are expected to be announced, one of them being Healthbook. The health-focused app is said to provide users with vital information, such as heart rate, hydration, blood pressure, respiratory rate, oxygen saturation, blood sugar, weight and more.

An increasing amount of speculation about Healthbook has inspired visual designer Jayaprasad Mohanan to create a live demo of the app that you can try right on your iPhone. The concept is entirely based on what we’ve heard from bloggers over the past four months, including leaked Healthbook screenshots posted by the well-connected Mark Gurman back in March. Check it out…

The above video provides a rundown of the Healthbook demo, detailing how the app will provide vital health and nutritional information, notifications for medical alerts, emergency cards with contact information and more. The app will have charts, numerical stats and visuals to show health information like cholesterol, sleeping habits, physical activity and all of the other aforementioned parameters.

It is expected that Healthbook will pair with the oft-rumored iWatch, which many believe will be announced at the WWDC keynote next week. But there are also conflicting reports that suggest the app might not have a presence at WWDC, and could be delayed until the iOS 8.1 software update. The good news is that we only have to wait less than seven days longer until we find out for sure.

WWDC kicks off on June 2nd, with an opening keynote at 10:00 AM Pacific. The five-day conference is hosted by a thousand Apple engineers, and over five-thousand developers make the trip each year. A number of flagship products have been announced at past WWDC keynotes, ranging from next-generation iPhones and Macs to new OS X and iOS versions. We’ll have full coverage of WWDC 2014 as it unfolds.