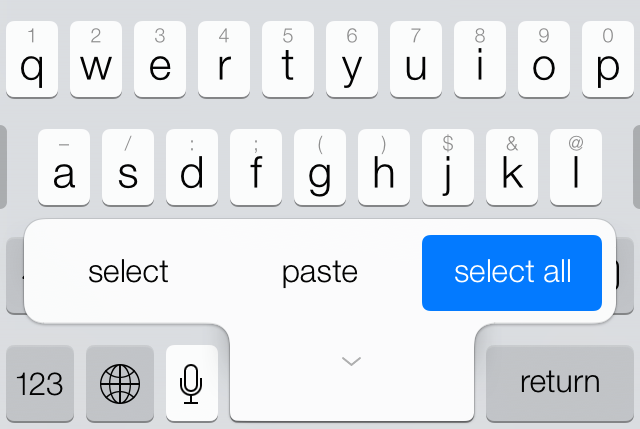 AltKeyboard 2 is a follow-up to the uber-popular A3tweaks release, AltKeyboard. It is perhaps only surpassed in expectation by the brand’s Auxo 2, which released earlier this year to much anticipation.

The rumblings about an iOS 7 compatible version of AltKeyboard have seemingly been around since iOS 7 was first jailbroken, or maybe even before that. Needless to say, AltKeyboard is one of the most popular jailbreak tweaks in the community.

It’s understandable why the tweak proves to be so popular. iOS’ stock keyboard is extremely small on the iPhone, and lacks any features like “swyping,” or a 5th row of keys. Because the iPhone has pretty-much maintained its diminutive form factor throughout its lifespan, there’s just not a lot of room for keyboard expansion when it comes to literally increasing the size of the keys or the number of available keys available on screen at once.

With that in mind, AltKeyboard 2 builds on the same formula that made the original release such a success. It adds functionality to the stock keyboard without increasing its size. Have a look at our full walkthrough of AltKeyboard 2 after the jump.

The basic features of AltKeyboard have essentially remained the same. The tweak employs flick-up gestures on the primary and secondary keyboard keys to input alternate characters. For example, swiping up on the ‘Q’ key will input a ‘1’; swiping on the ‘W’ key inputs a ‘2’ and so on. 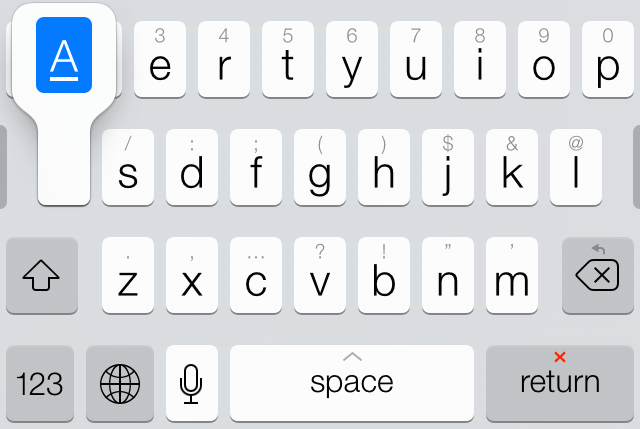 Having the alternate keyboard ability makes typing more efficient, but AltKeyboard 2 goes the extra mile and crams several new features into the package. For starters, you can now use a flick-down gesture on keys to input a capitalized character. This eliminates the necessity of using the shift key, which could potentially slow you down. 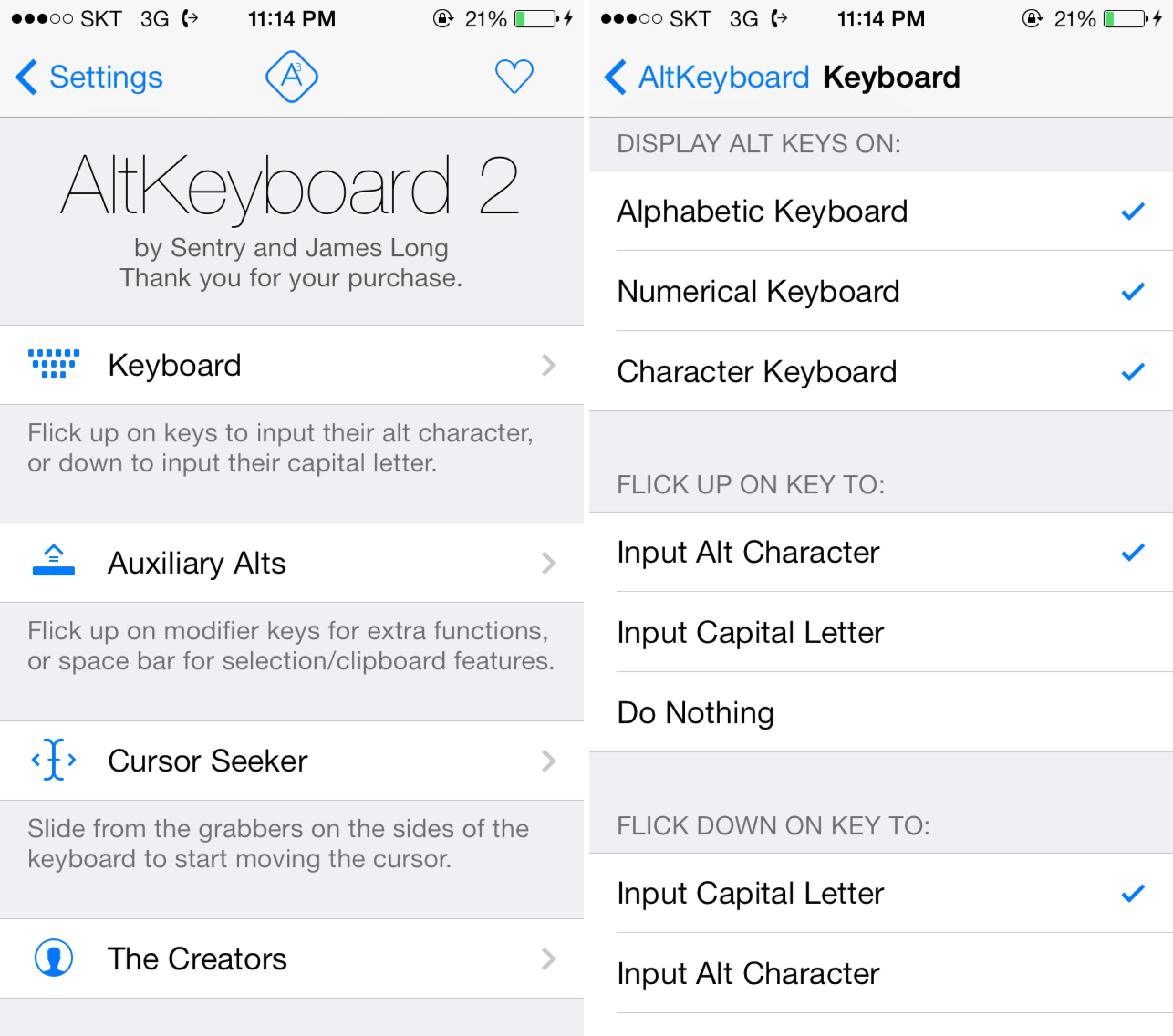 The most important aspect of the Auxiliary Alts feature is the spacebar key functions. Swiping up on the spacebar key reveals contextual options that allow you to copy, cut, select, select all, and paste text. Again, this is done in a way that allows you to keep your hands within the vicinity of the keyboard, which should, in theory at least, increase typing speed. 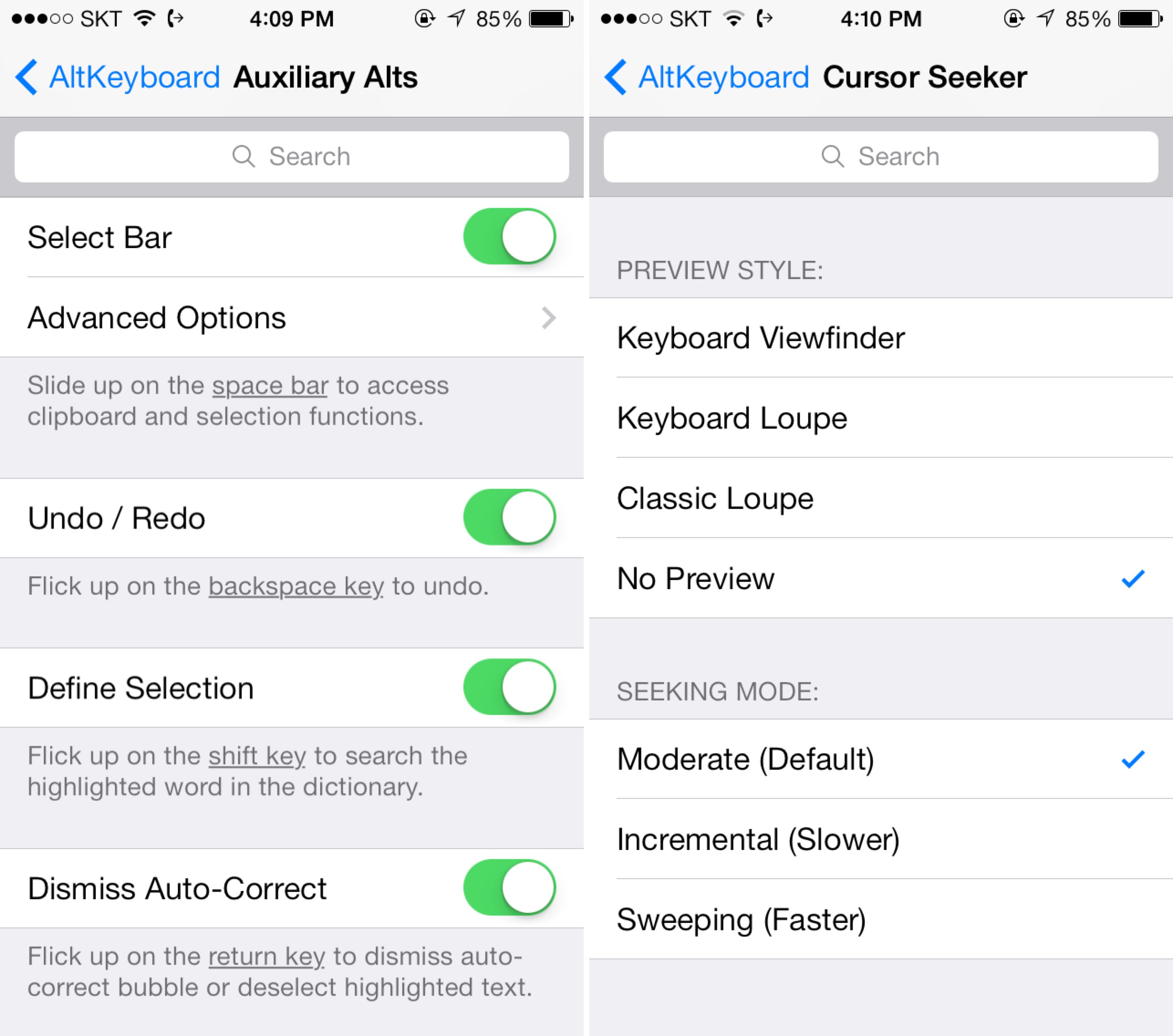 The final big feature found within AltKeyboard 2 is something called the “Cursor Seeker.” The Cursor seeker allows you to slide from either side of the keyboard to begin moving the cursor. This feature has options for using a new keyboard viewfinder preview, a keyboard loupe preview, a classic loupe preview, or no preview at all. The no preview option makes the Cursor Seeker feature work much like the popular SwipeSelection jailbreak tweak that many people love. It’s not as deep as SwipeSelection, but it provides you with the basic precision cursor movement that iOS lacks.

AltKeyboard 2 features quite a few settings to customize the way the tweak works, including the ability to invert or disable the flick-up or flick-down options, display letters in correlation with current shift state, and to disable various features of Auxiliary Alts.

If you’re looking for a jailbreak tweak that will almost singlehandedly improve your typing experience on iOS, then look no further. The core tweak—the flick-up and flick-down gestures—are what make AltKeyboard so good, but the new features added to the package make it superior to the original.

If you type a lot on iOS and you’re jailbroken, then AltKeyboard is a must-have tweak that shouldn’t be missed. Sentry didn’t miss a beat, even with a brand new developer, James Long, on board for this version of the ride. It’s available right now on Cydia’s BigBoss repo for $2.99 ($1.99 for owners of the original). Go get it, and report back in the comments with your findings.