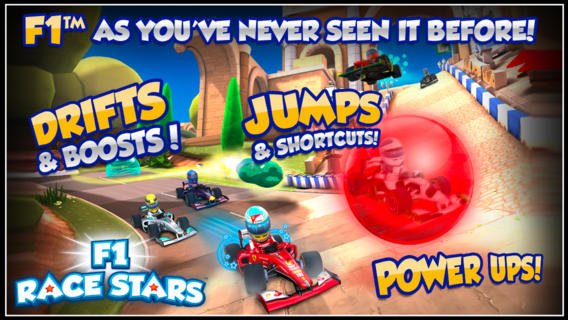 Games maker Codemasters has released a new and officially licensed Formula 1 game into the App Store.

F1 Race Stars, now available as a free-to-play download for the iPhone and iPad, includes all the cars, teams and drivers from the 2013 FIA Formula One World Championship racing across over 40 tracks from 15 F1 Grand Prix locations across the world.

But unlike other F1 games, this one’s more of an arcade title than a true simulation. You can race against AI-driven opponents or against your friends, see how you rank on the global Game Center leaderboards, collect various power-us, powerslide around corners, hit jumps and more.

Speaking of jumps, hit the jump for the gameplay trailer and more information…

Developers claim they’ve designed racing tracks for “quick-fire portable gaming” and pure fun – that’s why each track sports a bunch of jumps, shortcuts and other surprises.

And just as its title implies, F1 Race Stars includes officially licensed drivers like Sebastian Vettel, Lewis Hamilton and Fernando Alonso, as well as fantasy drivers such as the Robot, Ninja and Secret Agent.

The game was originally published for consoles back in 2012. The iOS port has been built on Codemasters EGO Game Technology Platform. 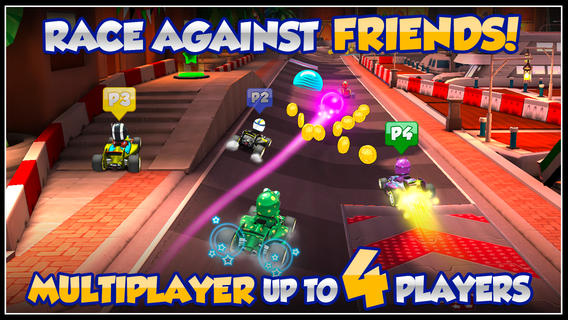 In addition to single-player, the game supports local multiplayer via Bluetooth for two players, or up to four players via Wi-Fi.

Your power-ups include Wet Weather, Homing Bubbles, Safety Car and many more, with gem packs for purchasing additional upgrades available for real money through the In-App Purchase mechanism.

The game requires an iPhone, iPod touch or iPad running iOS 6.0 or later.

If you’d rather play a true F1 sim, why not instead take Codemasters’ F1 Challenge for a spin? Released last October and available as a universal download priced at $2.99, it’ll delight you with superb graphics while letting you race against such names as Scuderia Ferrari’s Fernando Alonso, Red Bull Racing’s Sebastian Vettel, Vodafone McLaren Mercedes’ Jenson Button and Lotus F1 Team’s Kimi Räikkönen.