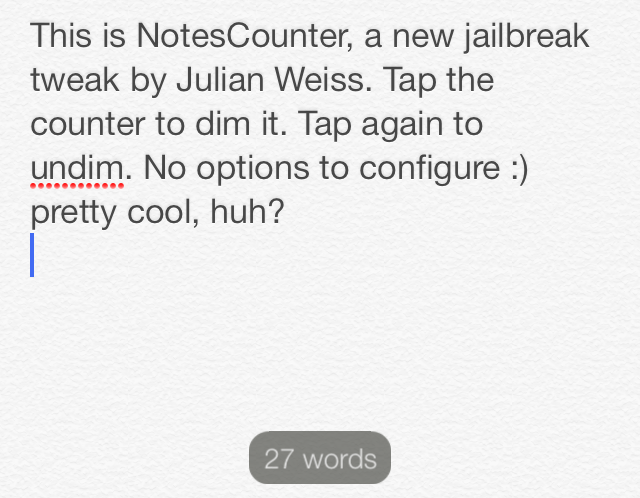 Prolific jailbreak developer Julian Weiss is quickly ascending the ranks as one of my favorite members of the community. He continues to release tweak after tweak, and many of them prove to be useful just like this one. NotesCounter is his latest addition to Cydia, and as is the case with many of his releases, it’s a simple yet effective jailbreak tweak.

As its name implies, NotesCounter adds a simple word counter to the Notes app interface. It’s accomplished in a way that’s good-looking without bringing unnecessary attention to itself. Have a look at our full video walkthrough of NotesCounter after the jump.

Once you install NotesCounter, simply head over to the Notes app to see it in action. The counter, which is near the bottom of the Notes app interface, can be dimmed by tapping on it. The dimming features makes the counter less of a distraction, and it can be easily undimmed with another tap. 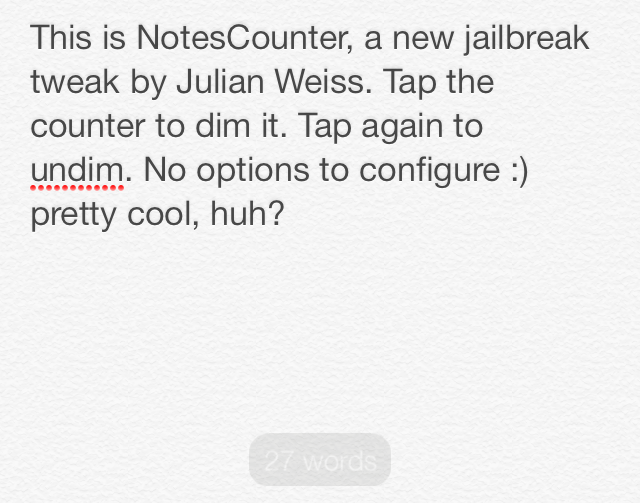 You can easily dim the counter with a tap

Notes Counter features no options to configure and it works on the iPad as well. If you’ve always wanted a word counter in the stock Notes app, then this is the tweak for you.

Venture over to Cydia’s BigBoss repo and download NotesCounter for free. It comes with a recommendation from yours truly. As someone who’s put the Notes app through its paces, I can definitely appreciate having such a simple feature. What about you?