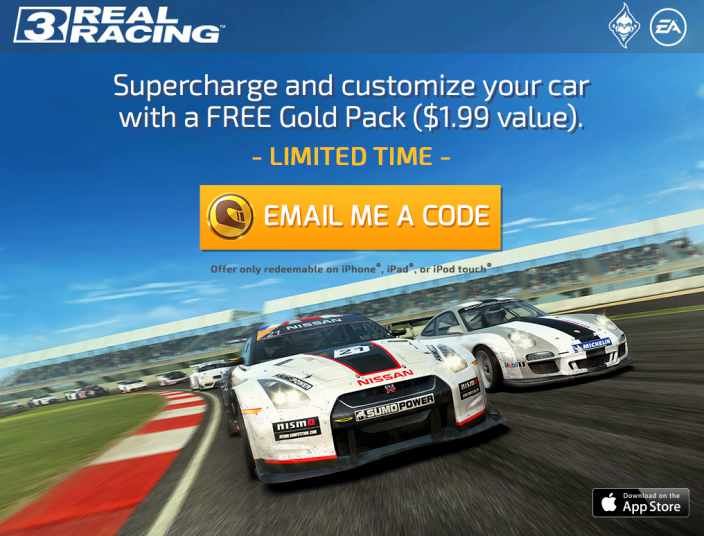 It seems Apple’s relaxed its policy concerning promotional codes for iOS and Mac applications. Promo codes are a popular tool among developers who use them for giveaways like ones iDownloadBlog runs on its Twitter channel from time to time.

They’re also a useful PR tool as developers usually send the codes to journalists who then download paid apps free of charge for review purposes.

Even though promo codes have never been available for paid in-app content sold through the iOS In-App Purchase mechanism (there are some workarounds to that, by the way), there are indications now that Apple is willing to change its stance…

As noted by Jeff Scott of 148Apps.com, Electronic Arts and Firemonkeys are seemingly using the feature to give every player ten free gold, a $1.99 value.

Note that the system is region-dependent so your country may not be eligible for this promotion. Anyway, you should see a webpage shown top of post with a big orange button saying ‘Email me a code’.

Tap the button, provide your email address and the promo code should hit your inbox shortly. You can then follow a link provided in the message body or paste the code into the Redeem field of the App Store’s Featured section.

You’ll see the following message upon the successful code redemption. 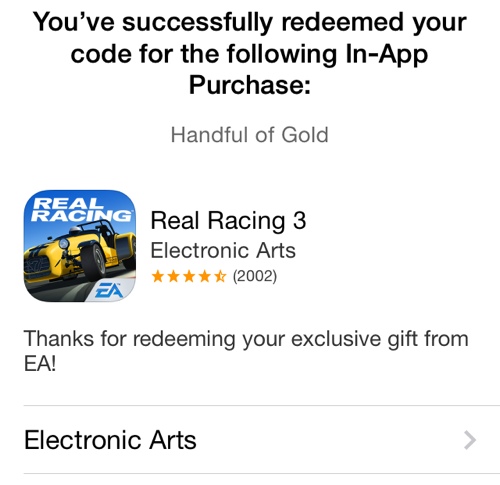 If you don’t have the app in question installed on your device – in this case, the free-to-download Real Racing 3 – a prompt will pop up saying that redeeming the In-App Purchase code will automatically download the app. 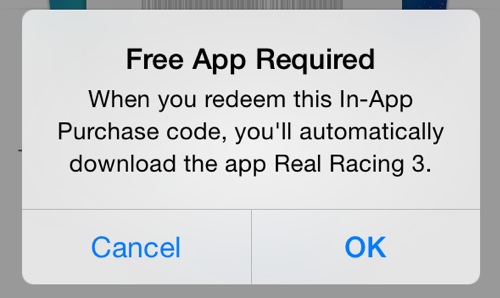 It wasn’t immediately clear whether this is a one-time promo or something Apple plans to make available to all registered developers. Curiously enough, one of Apple’s iOS 7 Tech Talks videos discusses unlimited promotional codes that are different than the regular ones.

For the sake of completeness, support documentation for iOS development at press time did not reflect the change and still stated that “promo codes don’t work for In-App purchase products, including Newsstand issues.”

Apple permits app developers to issue unlimited promo codes for special promotions through its App Store Code Program, but this has never been a possibility for In-App Purchases – at least not that I know of.

Be that as it may, I’m not surprised Apple is making changes to its promo code policy and wonder what took them so long given that most iOS games being released these days are freemium titles.

I can’t tell you how many times I’ve rejected a PR pitch for a free-to-download game which asks for cash because Apple wouldn’t allow developers to create promo codes for In-App Purchases.