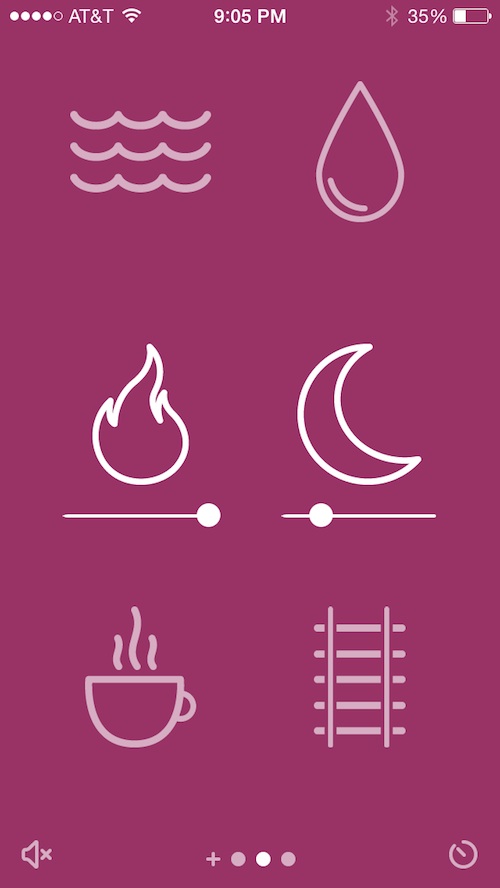 I’ve been getting wonderful, full nights of sleep lately thanks to this new app I’ve been testing. I’m one of those people who love being lulled to sleep by the comforting sounds of ocean waves, waterfalls, and chirping birds. I never leave home without some kind of audio aid for sleeping.

Noisli is an audio app that features realistic sounds of nature. What makes this app stand out from the rest is its iOS 7 theme. Get a good night’s sleep while being soothed with the visually comforting, colorful glow of your iPhone screen. Check out our Noisli review after the break…

The app’s design is what makes it stand out from other apps in the genre. Instead of looking at pictures of calm oceans or restful forest pathways, users are treated to the minimalist style that has become the iconic iOS look. While you may hear the sound of a babbling brook, you won’t see one.

There are three pages of audio selections. There are 16 individual sounds represented by an illustration. For example, the first page includes an icon of a rain cloud, a lighting bolt, wind, trees, leaves, and squiggly lines that imply water. Tap the icon to activate the sound. When it is active, you can adjust the volume of each sound. You can combine more than one sound at a time.

In addition to the 16 nature sounds, there is a “Combos” page where users can create their own groups of sounds. Tap the audio tracks you want to combine and then swipe from left to right until you see the Combos list. Tap the plus button to save the combination of sounds as one of your favorites.

While the audio plays, the screen slowly changes colors from blue to green to yellow to orange, etc. The relaxing effect created from the ever-changing color patterns helps calm your mind as you wait for slumber to come. 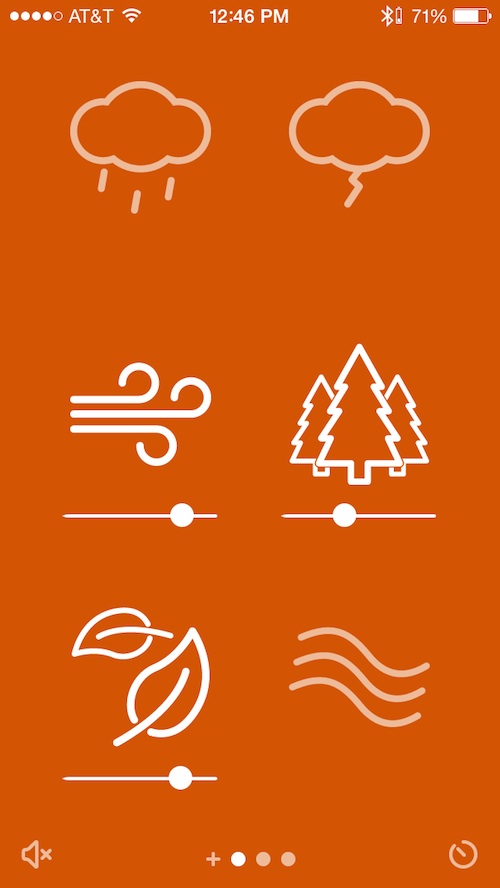 Open the app to see the 16 illustrations. Pick a sound to test it out. The audio tracks have a great quality. I’ve tried out a lot of different nature sound apps and many of them, especially the free ones, sound fake and hollow. The tracks in Noisli are realistic enough that you can almost believe you are outdoors.

Pick one or more sound and let the relaxation begin. If you are in need of a bit of meditation, keep your eyes on the changing colors of the screen for a bit of chromotherapy. The app slowly changes colors, creating a calming effect that settles your mood.

If you find a combination of sounds that you like, save them as a favorite in the Combos section. Swipe to the right to access the list, tap the plus (+) symbol and type in a name. Hit “Done” on the keyboard to save it. Whenever you want to listen to a particular group of nature sounds, they will be waiting for you.

Some combinations of sounds will already have a suggested combo name. For example, if you combine the Water Stream, Bonfire, and Summer Night tracks, the name “Camping Expert” will appear in the Combos list. Test out different combinations to see if there are any more hidden names.

If you want to listen to the relaxing sounds of nature as you fall asleep, but don’t want the app to run all night, set the timer. You can also set the fadeout function for five, 15, or 30 seconds. As the time comes to an end, the audio will slowly fade based on your selection until it stops.

The app runs in the background so you can use your device to read email, browse the Internet, or play games. 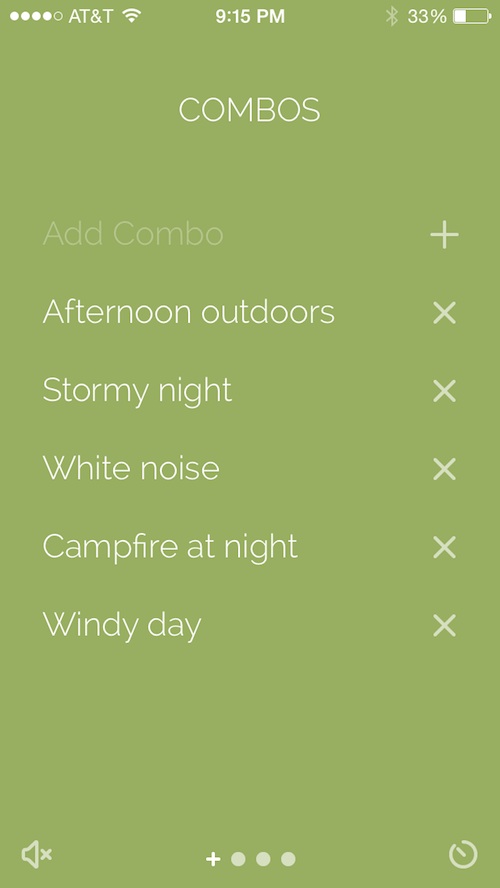 The quality of sound is the most important aspect of an app like this. If the babbling brook sounds fake, or has too many disruptive patterns, it will throw off your relaxation. The tracks in this app sound very realistic, have depth and warmth, and include just enough pattern repetitiveness to help calm your brain without sounding forced.

You can only save five combos. Since the app is not free, there should be no limit to how many combos you can store.

I’d love to see more sounds. When I need to focus on my work, I like to listen to Tibetan Singing Bowl tracks.  That would be a nice addition.

Noisli is on sale for $0.99, normally priced at $1.99. Many apps in this genre start out as free downloads, but require in-app purchases to unlock certain tracks. Those apps usually also have poor quality sounds. At the price of $0.99, this is a great buy. However, the full price of two dollars seems a bit high to me.

If you are looking for a good app to help get you to sleep tonight, this one works great. The quality of sound is excellent and the audio sounds realistic. Tracks are deep, rich and natural. I’m literally getting sleepy while typing this because I am listening to the thunderstorm while writing. This app is available on the iPad, iPhone, and iPod touch. Download it in the App Store today.

Brain Wave is a scientific app that features binaural tones. I have been using Nature Sounds Pro for a few years now because the audio tracks are awesome. However, the app has not been updated for iOS 7, so it may turn some users off.

Are you going to try Noisli when you go to sleep tonight? Let us know if it works for you in the comments below.