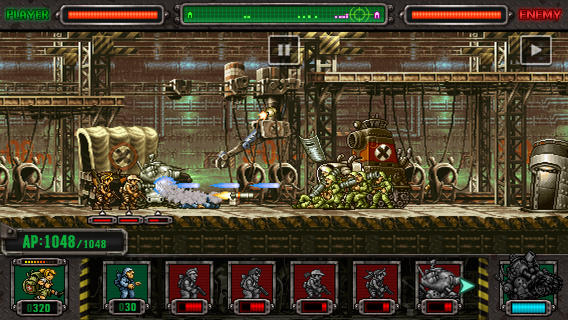 The prolific Metal Slug series of games first launched in the mid 1990s on Neo-Geo. There have been dozens of subsequent releases and spinoffs staring the skilled military team of fighters, including a touch version of Metal Slug that has since been removed from the App Store.

Metal Slug Defense is a completely new take on the game, mixing the look and elements of the original with a tower defense style mechanic that has impressed fans of the genre instead of driving them into a rage…

The game is set in the Metal Slug world with the familiar Regular Army team that you grew up with. It has the same cartoon style and pixelated graphics. You’ll even find yourself humming along to the hyperactive club music soundtrack. 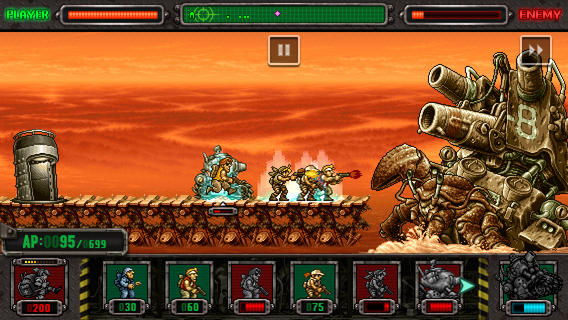 Unlike the original, this version is not a run-and-gun game. It is a side-scrolling castle defense that pits your team against the Rebel Army headed by the maniacal Donald Morden. The Rebel Army has been working overtime and now occupies every major city around the world. Your job is to destroy the occupation and free the residents of each nation.

Players command a set of units that attack the enemy. If you successfully destroy the Rebel Army base, your team wins the battle. However, Morden’s units can attack back and destroy you first.

Each unit has its own hit point and attack power. Players command units by tapping individual unit cards to send in a wave of ammo. There are more than 60 different characters and units to play. At first, players command Regular Army units, but as enemies are defeated, Morden’s soldiers will defect to the other side. You’ll even be able to launch the titular tank, the Metal Slug, with a powerful special attack. 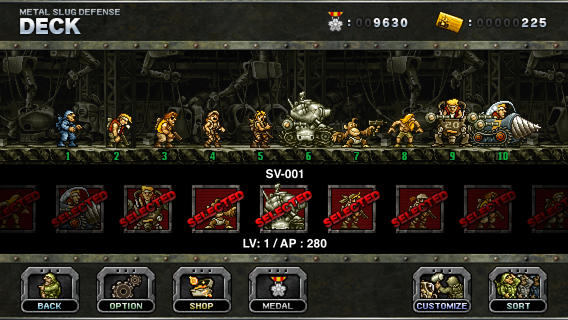 The game is free to download, but that doesn’t mean you’ll be bombarded with in-app purchase antics. You can happily play through the game without having to pay to proceed.

Usually, classic games that get completely redesigned and turned into a freemium title incite waves of angry fans who are unable to contain their emotions. However, based on the four-star rating in the App Store, this game appears to have made long time fans happy and creating new ones as well.

Metal Slug Defense is available on the iPhone, iPad, and iPod touch for free. Download it in the App Store today.

How do you feel about SNK turning Metal Slug into a castle defense game?