After finding Samsung guilty of infringing upon three of the five Apple patents included in the second Apple vs. Samsung suit in California and awarding the iPhone maker maker a paltry $119.6 million in damages, the jury on Monday found that the Galaxy maker did not owe Apple any additional money.

Judge Lucy Koh asked the jurors to recalculate the damages after Apple’s legal sharks complained that one infringing Samsung device was left out of the final tally. Hit the jump for the full details…

Ina Fried has been following this trial closely and has filed this report with Re/code:

The move follow’s the jury’s earlier decision to award $119.6 million to Apple, as well as $158,400 to Samsung on its countersuit.

The jury had been asked to reconsider one product and one patent for which they found infringement but did not award damages.

The story originally asserted that Samsung owes Apple an additional $4 million, but the author has quickly changed the headline and the body to reflect that the original award remains unchanged.

While the jury actually did award Apple an additional $4 million award based on an additional infringing Samsung product, it simultaneously subtracted $4 million in damages related to another Samsung device.

“It took the jury a little over two hours to reallocate its damages award,” wrote Fried. “The panel raised the amount owed for some products, but lowered the amount for others, basically leaving things where they stood initially.”

Neither the Galaxy S4 nor the S5 was part of this case. 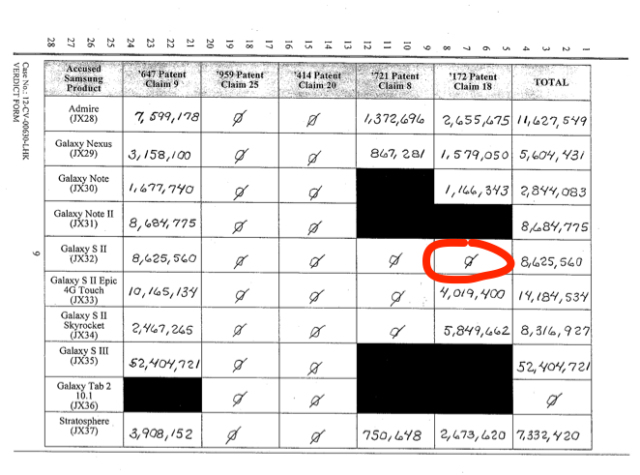 Needless to say, Apple and Samsung are both expected to appeal the verdict and other parts of this case so this legal saga is far from its conclusion.

If you add the $119 million award to the $900+ million in damages awarded to Apple in the first trial, Apple gets to walk with nearly the amount of damages it had been originally awarded – about $1.049 billion.

But unlike the first trial that awarded Samsung zero damages in its counter suit, the second trial saw the South Korean firm earn $158,400 in damages on its countersuit because Apple did infringe on a Samsung patent.

Although court documents revealed that Google could cover some of Samsung’s legal fees and indemnify the firm, that did not transpire: the jury has not found Samsung to infringe Apple’s patents related to background synchronization and universal search, both core Android features.

As a reminder, Apple asked for a cool $2.2 billion in this case.

Even though $119 million is peanuts in the larger scheme of things, some watchers have rightfully pointed that this case has never been about the money. Unfortunately, the amount of damages awarded to Apple will hardly force Samsung to eschew copying.

“I still don’t think Apple has any regrets about pursuing this case,” noted John Apple pundit Gruber on his Daring Fireball blog.

It’s about the message it sends to all competitors, not just Samsung: We are irrationally protective of our work, and if you wrong us, we will go after you.

One needs look no further than Apple’s statement last Friday (emphasis mine):

We are grateful to the jury and the court for their service. Today’s ruling reinforces what courts around the world have already found: That Samsung willfully stole our ideas and copied our products.

We are fighting to defend the hard work that goes into beloved products like the iPhone, which our employees devote their lives to designing and delivering for our customers.

If  you’re curious to learn how the greatest smartphone legal saga of our time unfolded and what went behind the scenes, check out Kurt Eichenwald’s excellent feature in Vanity Fair.

Does Apple have reasons to celebrate after this verdict?