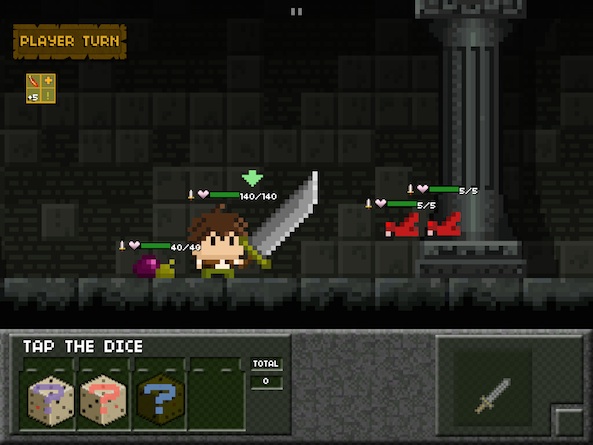 By now, it may have become clear that I am a fan of good old-fashioned role-playing games. Give me a dungeon crawl over a physics-based game, any day of the week. As much as I love the genre, games can seem a bit redundant over time when you’ve played so many of them.

Tiny Dice Dungeon is a unique twist on the RPG genre that mixes dungeon crawl gameplay with dice throwing mechanics. Role doubles for twice the damage. Role a one and lose your turn…

Retro style pixelated games have almost overstayed their welcome. However, I still enjoy the flashback style, especially when the game features an excellent 8-bit sound track, as this one does. Players start with a sword-wielding adventurer and go on dozens of quests to rescue missing townsfolk and rebuild their hometown.

In the town, you can hire a hunter to capture and train monsters, create hybrid monsters, build attack and capture dice sets, and more.

Players can rotate monsters, build special dice, and buy special items that can be used to help defeat enemies. 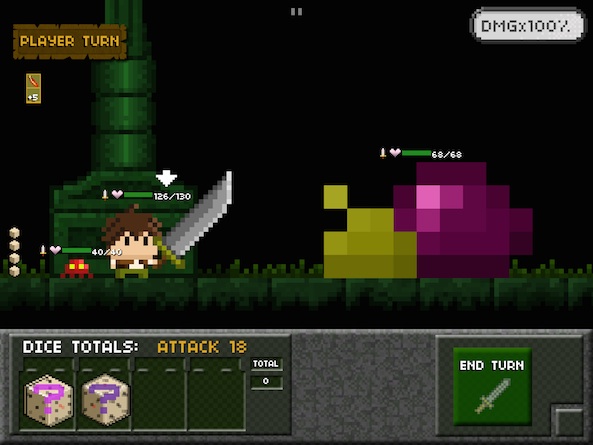 When you first start the game, a wise old wizard will show you how to defeat or capture monsters. After a few rounds, you’ll be able to head out on your own. Go on as many quests as possible at first to find missing residents of the town. When they are rescued, you will be able to repair their building and unlock their features. For example, when you save the monster rescue woman, she makes it possible for you to release one of your captured monsters back into the wild. This is very helpful because you only have a limited number of slots. If your inventory is full, you can release a monster in order to capture something you may like better in the future. When you release a monster, you will receive gold and dice shards as a reward.

Dice shards are used to build new dice. There are two different types of dice; capture and attack. Capture dice are used to improve your ability to capture a monster. If you have more dice, you will have a better chance of rolling higher than the enemy and capturing it. Attack dice are used during battle. You start with two basic attack dice and can use recipes to build specialized ones. For example, the Health die results are used to replenish your hit points.

When in battle, the goal is to destroy or capture all enemies in a quest. You will start by rolling your set of dice. Depending on what level you are at, you will be able to hold more dice in your set. You can re-roll dice as many times as you like and the cumulative total is used against your enemy. For example, if you have two dice and your enemy has a max hit point of 30, you can try to hit him once for 30 points by rerolling your dice over and over again. The problem is that, if you roll a one, you lose your turn. No attack. So, even if you manage to get up to 28 points, if the next roll is a one, you lose it all.

To capture a monster, hit it for the exact number of hit points it has. For example, if the monster has 30 hit points, you must roll 30 in order to have the chance to capture it. Then, your capture dice are rolled against the monster’s capture dice. If you win, you get to keep it. If you lose, it is destroyed.

The monsters you capture can be used as companion fighters in battle. Your new pet will also have a turn attacking enemies. Monsters start with one die, but can add more to their battle set when they increase their level.

The game offers plenty of in-app purchase, but most of the things you can pay real money for are found during quests. The only real pay wall you hit is the energy bar. You can play five quests before you run out of energy. It takes about 12 minutes to replenish one energy point. So, after about a half hour to 45 minutes, you’ll have to put the game down for an hour to replenish all energy or pay more to continue. 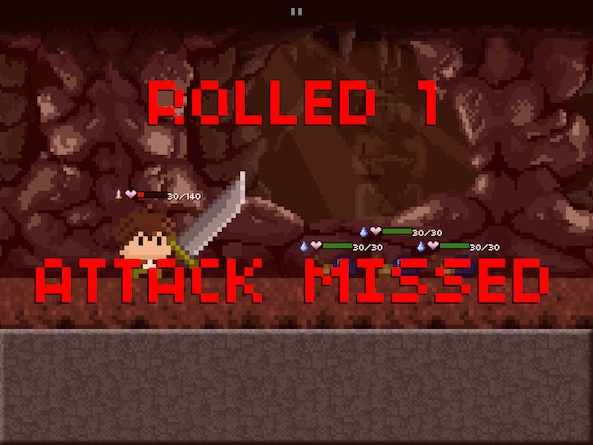 I love the dice roll battle mechanics. It reminds me of some of the dice building games I’ve played in the past. Your success is based partly on strategy, but mostly on luck. If you are too greedy with your rolls, you may lose everything.

Although the game is free to download, it does present you with a pay wall that forces you to either spend real cash or wait to play more. I’ve never been a fan of the pay-to-continue aspect of freemium games.

Tiny Dice Dungeon is free to download. There are in-game items that will help further your adventure, but none of them are items that can’t be found by looting the bodies of your defeated enemies. However, the pay-to-play feature puts you in the position of either buying more time, or resting between rounds. The replay value is high since you can replay any quest for more loot and experience points.

Since the game doesn’t cost anything to download, I’d recommend giving it a try to anyone who found my game description above interesting. I’ve played it on-and-off for a few hours now and found it to be very entertaining. As long as you are willing to take breaks every so often, you can enjoy it for a long time. This game is available on the iPhone, iPad, and iPod touch. Download it in the App Store today.

Pixels & Dungeons is a retro style rogue-like RPG. Heroes of Loot is another fun RPG game with pixelated graphics.

What do you think of Tiny Dice Dungeon?