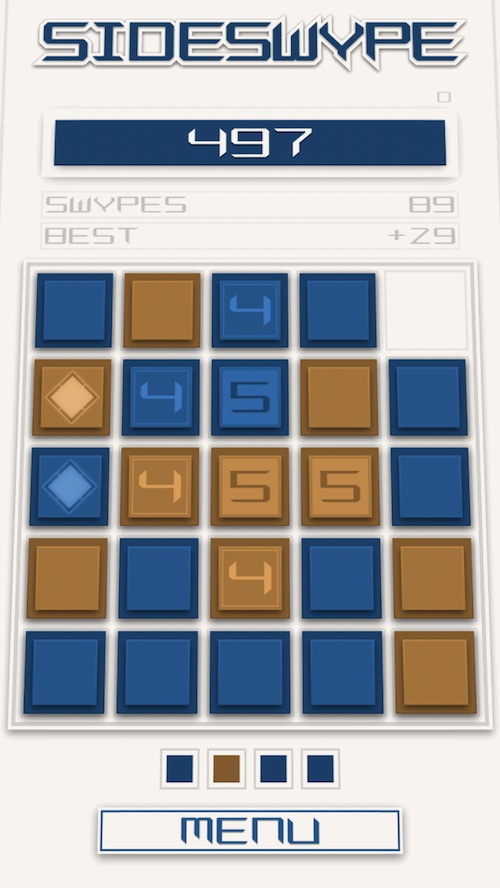 When you look at the picture above, your first thought may be, “this looks like another clone of Threes.” I know that I thought so when I took my first glance at the game. Although the basic mechanics are the same, the game is not a clone.

SideSwype is a match-three game that doesn’t act like it. Unlike traditional gem matching puzzles, players don’t have nearly as much control over what matches are made or when…

The board is made up of a five-by-five grid. The 20 squares are populated with a handful of blocks in two different colors. Players match the colors by swiping the screen either up, down, left or right. When at least three blocks match, they explode in a simple confetti animation.

In addition to two solid colored blocks, there are some blocks that have either the number four or five inside. These blocks will not count toward a match unless the amount of blocks that are matched is equal to the number.

For example, if a green four appears on the screen, it will stay on the board until it is matched with at least four green blocks in a row or column. 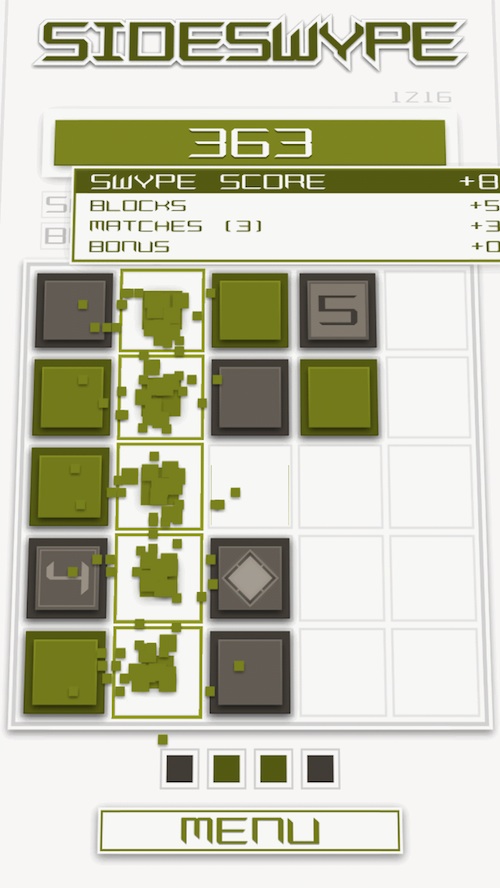 If you’ve ever played Threes (or its free clone, 2048), you will have a basic understanding of the mechanics of this game. It is important to note that, while similar in movements, this is not a copycat of any of the number adding block games.

When the game begins, eight colored blocks randomly appear on the grid. You can slide all blocks at once up, down, left or right. Every block will move to the furthest possible spot on the grid. For example, if you swipe upward and there are three blocks at the very top, one in the middle, and one at the bottom, and are all in different columns, they will all end up in the same row at the end of that move.

The goal is to make as many matches as possible to increase your score. You can keep playing and keep matching, as long as there is at least one open square on the grid. If all squares are full and no matches can be made, the game ends.

Every time you swipe across the screen in any direction, a new set of blocks appears. At first, you will get three new blocks in random places each time. As the game progresses, more blocks appear at once. I got to five new blocks at a time, but it is possible that the game goes even higher.

When a block with a four or five inside of it appears, you must match it with that number of blocks. You can still use the color to match other blocks of threes, but it will remain on the screen until it is matched with four or five blocks in one move.

For example, if three blue blocks can be matched and one of them has a four inside it, the two solid colored blocks will disappear, but the one with the number in it will remain in play.

When you successfully match a number block, your reward will be a power up. The diamond power up destroys adjacent blocks, while the bomb destroys every block on the grid with the same color. These bonus items can be very helpful for getting rid of number blocks (especially fives) that you are having a hard time clearing off of the board.

At first, the only available color scheme is blue with brown. However, after you score a certain number of points, other themes will unlock. I’m not exactly sure what score you must reach. However, my highest score was 2,390 and I managed to unlock all six color schemes. 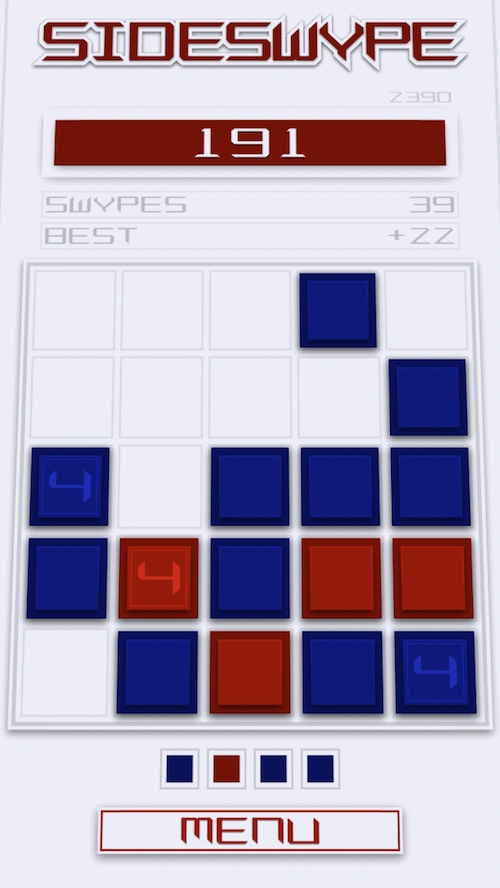 I like that this game isn’t a clone of Threes. It mixes the match-three genre with the mechanics of the new trend in grid swiping games. It is easy to pick up and play without being excruciatingly challenging.

The game will always continue where you left off. So, if you are playing it while in line at the store and suddenly remembered that you forgot the milk, you can put the game away and pick up right were you left off when you get back into line.

There doesn’t seem to be any way to play the game strategically. The block preview shows you what colors will appear, but not where they will end up. My highest score was achieved when I tried playing the game swiftly instead of tactically. I simple swiped one direction or another without thinking about the outcome and ended up scoring nearly three times as much as when I was actually planning my moves.

SideSwype costs $1.99. In an era of knockoff clones of Threes that are free to download, you might think this game is too expensive. However, it is priced according to the market average for the genre. The replay value is high since no two games are ever the same and the whole point is to see whether you can beat your high score.

I enjoyed this game, even though I don’t need strategy to play it. It is a great game for picking up and playing when you only have a few minutes. You will not lose your game if you have to stop playing to answer the phone or respond to an email from your boss. If you like match-three games, you should give it a try. This game is available on the iPhone, iPad, and iPod touch for $1.99. Download it in the App Store today.

The biggest comparison is to Threes, and the more popular, newer title, 2048. However, this is not a clone or a ripoff. It has similar mechanics, but is a very different game.