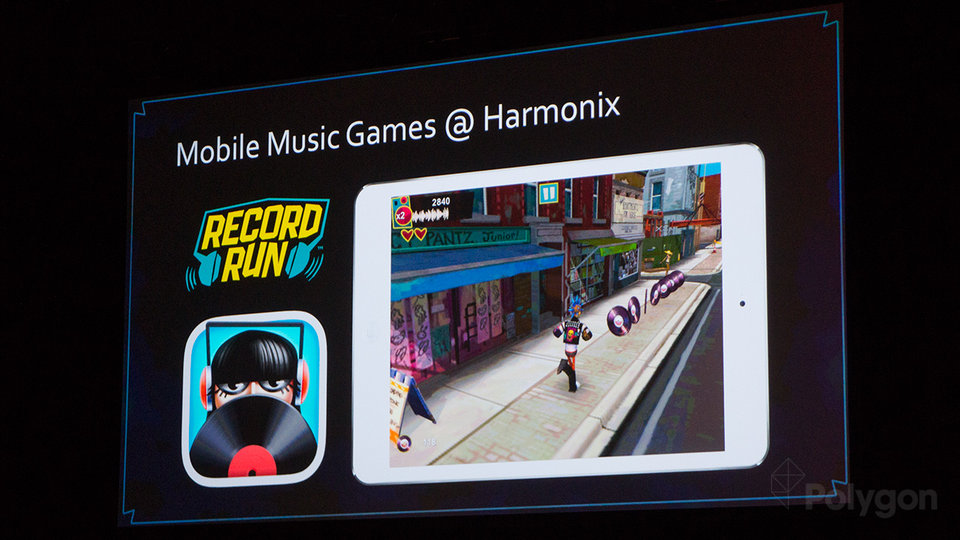 The name Harmonix is legendary in the console gaming world, as it was behind a number of popular games in the early 2000’s—Guitar Hero, Rock Band and Dance Central to name a few. And now it’s hoping that success will translate into the mobile world.

The studio announced its first mobile game yesterday at PAX (Penny Arcade Expo) East called ‘Record Run.’ It’s an endless runner of sorts that asks players to avoid various obstacles and collect vinyl records, while jogging to the beat of a custom soundtrack…

That’s right, Record Run can actually pull your favorite songs from your iTunes Music library on your device and insert it into the game’s soundtrack. Harmonix had to develop a new kind of technology to pull this off, and it seems very excited about its potential.

Harmonix is moving into the mobile market, and its first foray when it comes to games is a music-based runner called Record Run, studio head Alex Rigopulos announced during his talk at PAX East 2014 today. […]

Record Run takes your favorite songs and uses them as its soundtrack, Rigopulos explained. It’s a free-to-play title with gameplay that he compared to Gaijin Games’ Bit.Trip Runner series. He showed a quick clip of footage in which a character jogged down a two-lane sidewalk to the beat of a song, sliding under and jumping over obstacles as it collected vinyl records.

This isn’t Harmonix’s first mobile project—it released a music video-maker by the name of VidRhythm in 2011—and it won’t be its last. Rigopulos said the studio has “lots of other irons in the fire on mobile,” and his team is working on 13 ‘very different’ prototypes.

There’s no word yet on when Record Run will be available, but it sounds like Harmonix wants to release it soon. As it says above it will be a free-to-play title, and we expect it to support both the iPhone and iPad. We’ll keep you updated as we learn more about the game.