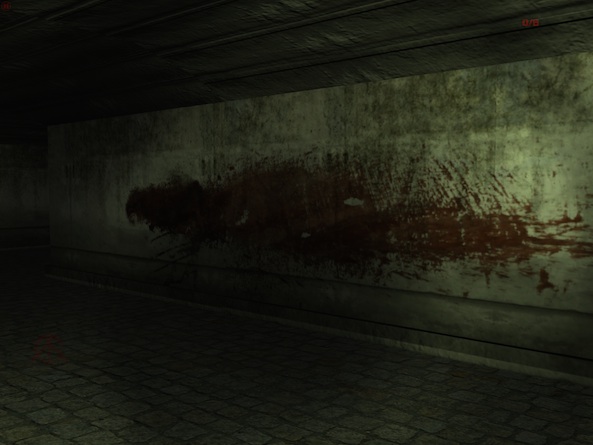 My first discovery of the fabled “Slender Man” happened a few years ago. A friend showed me YouTube videos of found footage starring a tall, thin figure with a featureless face. In the videos, the electronics of the camera would fail every time Slender Man would appear on screen. Although I knew it was make believe, it still creeped me out.

Dead Room – The Dark One is a play on the fictitious figure. Only this mysterious entity looks and moves differently. The gameplay is similar to other Slender Man survival titles, but seems to have no ending, except a bad one…

The entire game is played in the corridors of what looks like an abandoned warehouse. Thanks to the dimly lit background, players can rarely see more than 15 feet in front of them and oftentimes, their view is obstructed by another narrow hallway. The only distinguishable difference from one location to the next is blood splatter on walls, or the occasional “Save Me” written in blood.

There are a few dead ends with what looks like giant steel doors, but there is no lock on them, so you can’t get out. Inevitably, dead ends are “The Dark One’s” favorite haunts. If you get stuck in a corner, you can be sure he is hiding around the corner.

Speaking of The Dark One, the creepy creature can regularly be seen sneaking around corners. He is usually shadowed and difficult to see due to the darkness in the room. Even if you do get the opportunity to look at him in the beam of your flashlight, it only lasts a fraction of a second because his presence causes your vision to disrupt similar to that YouTube video mentioned above.

The audio is incredibly disturbing. You play the game from a first-person point of view and can constantly hear the sound of your anxiety-filled heavy breathing. It is as if you are both exhausted from running and breathless from fear.

The game is otherwise silent save for a few background noises every once in a while and the times when The Dark One eerily exclaims that he is going to kill you. It makes my stomach turn just thinking about that voice.

When The Dark One gets close to you, your vision will fog. That is, electronic static will appear. The closer he gets, the worse the static becomes. A flashing symbol that is always present turns red and becomes more pronounced. If you don’t manage to get away from him, the last thing you will see is the static before he drags your soul to hell. 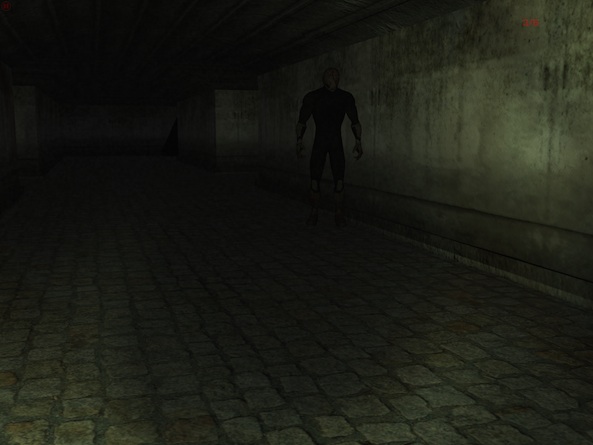 The goal of the game is to find six keys and get out. The six keys are hidden throughout the labyrinth of hallways, floating in mid air. They are difficult to find and sometimes, you will cross the same hallway multiple times before one will suddenly appear.

Every time you collect a key, The Dark One increases his hunt for you. You could spend 10 minutes, roaming the halls without seeing his ominous figure. Then, after finding a key, he will be waiting around a corner for you.

The Dark One is usually far enough away that, if you don’t freak out and run into a dead end, you can usually run past him. Because your vision is obscured by the static, you won’t be able to see where you are going. However, a calm mind will help you run past him far enough to regain your sight.

He doesn’t exactly follow you either. Once you turn a corner, it is as if he decides to go another way and won’t be right on your tail. Most of the time, anyway. The more keys you have, the more he wants to get you and will track your every move.

As I mentioned above, the goal is to first find the six keys, and then get out. The getting out part is where I got lost. I found the six keys a number of times, but never found an exit. None of the dead ends that look like doors revealed any keyholes. I even went online in search of some gameplay videos that might reveal the secret hidden exit. I found nothing and remained stranded in the Dark One’s Dead Room.

As you collect keys, even if you don’t find all six, they will be stored in your inventory. You can use the keys to purchase different types of flashlights. I purchased two of them and found that they didn’t help me beat the game or avoid The Dark One. One flashlight was slightly brighter and one included a dirty handprint that slightly obscured my vision, but added a frightening element that I quite liked. 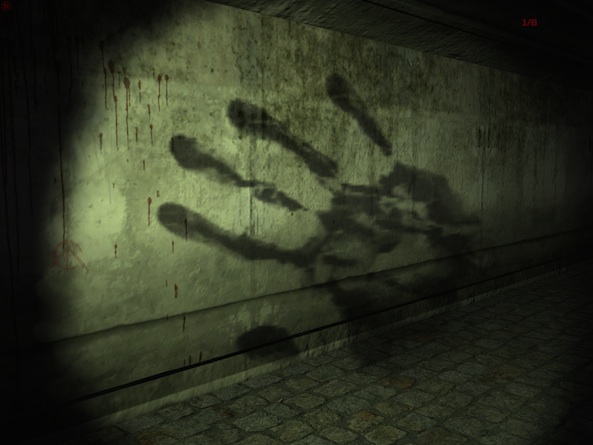 Traversing the dark, bloody corridors of the Dead Room proved to be a great scare for me. I’m sure I’ve mentioned that I love scary games and am easily startled by anything even remotely sinister. I felt plenty spooked by the visuals and audio atmosphere.

Because I was never able to find the way out, I have a sneaking suspicion that this game doesn’t have an exit at all. That would mean that there is no real point to the game.

If it is true, and getting out alive is unachievable, it is possible that the game’s developer has more in store for us in the future. The app summary notes that this is the first chapter in a series of horror games.

Dead Room – The Dark One costs $2.99. The price is reasonable for the level of gameplay. You can literally spend hours wandering around the hallways, trying to avoid capture by the evil that is hunting you. It is hard to say whether the replay value is worth it if you really can’t escape the room.

This is one of those games that are difficult for me to assess. On the one hand, it is definitely a lot of fun and really scares the bah-jesus out of me. On the other hand, the possibility that there is no way to get out of the room makes me think it isn’t worth the effort. If you are intrigued by my description and want to see if you can find a way out, please let me know in the comments whether there really is an exit or not. This game is available on the iPhone, iPad, and iPod touch. Download it in the App Store today.

Slender-Man and Slender Rising are both survival games that feature the faceless Internet urban legend.