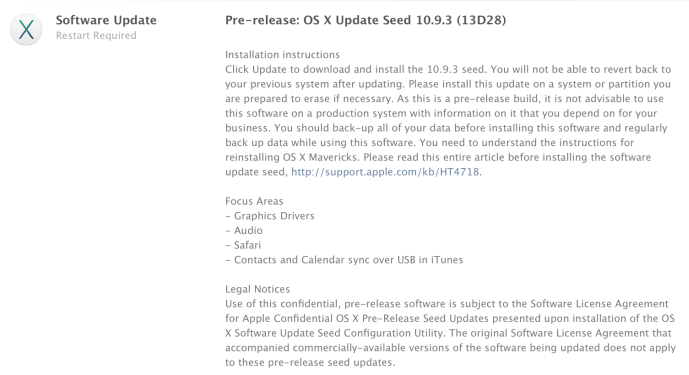 Now available in Dev Center for registered Mac developers, a new version (build 13D28) of what would become Apple’s third major software update to its desktop operating system focuses on further refinements to Graphics Drivers, Safari, Audio and Contacts and Calendar sync over USB in iTunes…

The new build can be downloaded using the Software Update tab in the Mac App Store or from the Mac section of Apple’s Dev Center portal for developers.

Mavericks has inexplicably removed the ability to sync contacts and calendar items in iTunes over a USB cable, much to the dismay of users.

Fortunately, a forthcoming iTunes 11.1.6 update, a beta of which was seeded to developers earlier this month, “restores the ability to sync contacts and calendar info from your Mac,” as per release notes.

The second beta of OS X 10.9.3 was released on March 13, bringing a few minor changes as public release looms. The first beta dated March 7 has brought out a new native Retina resolution option for 4K displays at 60Hz.

Unlike Apple’s Retina implementation in iOS, Mavericks doesn’t scale up user interface elements to retain their size regardless of a screen resolution.

Creative pros whose work demands 4K monitors have complained about Apple’s half-baked implementation because it makes the icons, text and other elements impossibly small.