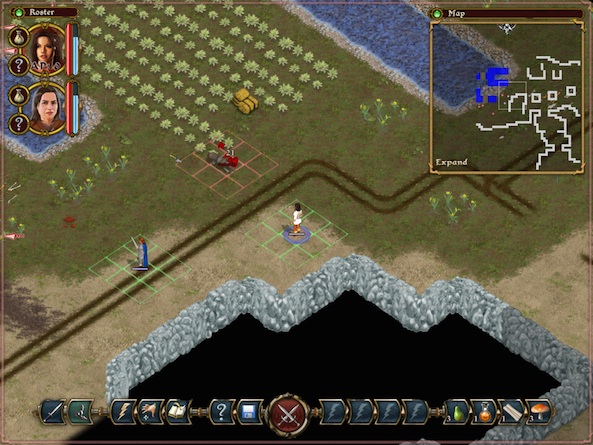 Avadon: The Black Fortress HD first launched in mid-2011, back when companies were not as interested in putting expansive, explorative games on the iPad. Today, there are plenty of team-based RPGs to satisfy my love of the genre, but Avadon holds a special place in my heart.

Two-and-a-half years after the first story made it to the iPad, Spiderweb Software has finally launched its sequel, Avadon 2: The Corruption HD, in the App Store…

Players follow their character’s adventure by watching from above. It isn’t a top-down view, but you are definitely looking down on things. Rooms are separated by walls, but it looks as though you’ve taken the roofs off of the houses. Unexplored areas are darkened by a black fog, typical of dungeon crawl type games.

The graphics pay close attention to detail, even though you are too far away to see much. Paved walkways have various smooth rocks, hardwood floors are covered with floral patterned rugs, and even at a distance you can see that your hero wears a sheathed sword or archer’s bow.

A mini map is displayed in the upper right corner of the screen. You can use this map to quickly select a location to travel to if it is a long ways off. The map will show you areas that you’ve uncovered and significant locations to travel to.

You main character’s abilities are listed at the bottom of the screen. Your main and secondary attacks are on the far left. With spells and inventory items on the far right. When in combat, the peace symbol in the middle will turn into weapons, showing that a battle is in play.

You can access your adventurers’ stats, open their inventory bags, and upgrade their skills by tapping on one of their icons in the upper left corner. Tap the question mark (or plus symbol if they need to train) to access a character’s skills. Tap the bag to access inventory.

The game also comes with a very comprehensive how-to guide that you can access by tapping the question mark next to the Save icon at the bottom of the screen in the character’s action bar. This detailed instruction manual will help with anything from creating a character to using items in combat. 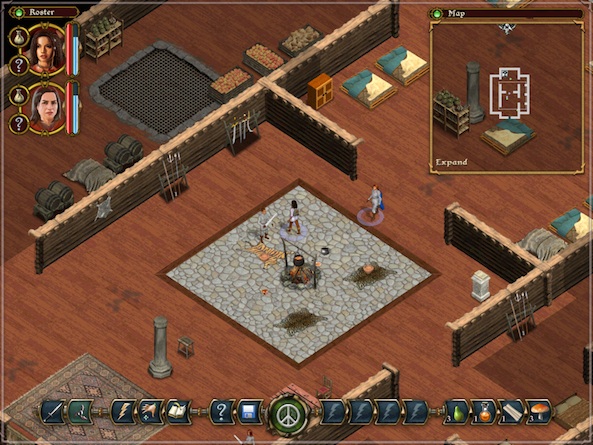 This story follows up the account of The Black Fortress. In The Corruption, you are in the service of the Black Fortress and your job is to keep a look out for rebels and unwanted visitors to Avadon. You will end up much more involved in fighting the rebellion than you ever thought possible as strange events unfold along your adventure.

Just to let you know, you do not need to play The Black Fortress in order to enjoy this game. They act as two separate stories with the first only being referenced at the beginning of the second.

The first thing you will do is create a character. In addition to the four original classes of characters, Blademaster, Shadowalker, Shaman, and Sorcerer, you can now be a Tinkermage. This new class lets players take advantage of things like lock picking and mine disabling. Choose your class and your gender to get started on your first adventure.

If you see something on the ground, you may want to pick it up. It could be worth something. Tap the grab icon at the bottom of the screen. It looks like a hand reaching out. If you find weapons or armor, you can immediately equip them. If you find sellable items, keep them in your inventory so you can sell them to vendors you meet along the way. You will likely pick up a lot of junk, so don’t fill you bags too full or you will run out of space for the good stuff.

A scout who will be a part of your adventure for a while will immediately greet you at the beginning of the game. Later, you will meet other non-player characters (NPCs) that you can command and they will become part of your team. This team-up is very useful when you are fighting off ogres, dire rats, and other dangerous enemies in the forests.

You will have missions that you must accomplish to further the story along. There will always be one main mission, but you may also pick up side quests or raid dungeons for extra money and loot. Your current quests are listed in your journal alongside any special items you may have and the codex of things you learn from the game.

When in battle, select the weapon you wish to use and attack the enemy by tapping it. You may be too far away at first and will need to move forward. Some weapons let you make ranged attacks. Different classes have different weapons and abilities. As you level up, you will learn new skills and increase efficiencies in abilities. 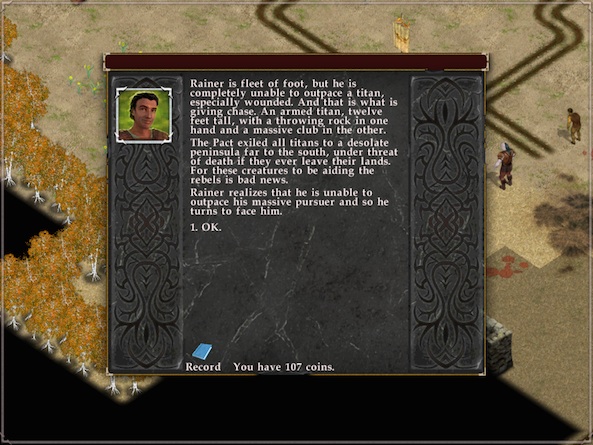 Just like its predecessor, this game reminds me of playing a campaign of Dungeons and Dragons. Players are asked to become deeply involved in the characters’ stories, meeting new people, killing enemies, and fighting for a cause. Many characters you meet will have multiple responses. The way the story ends is reflected by the responses you give to characters through out the game.

My first answer is that nothing is wrong with this game. It is perfect. However, those readers that are new to the old school RPG genre may have a different opinion. If you aren’t familiar with the way classic RPGs are built, the user interface may seem tedious and even confusing. That isn’t really the fault of this game, but more of the genre itself.

Avadon 2: The Corruption HD costs $9.99. Some of you might choke on your chocolate milk at that price. However, keep in mind that this is a classic, epic role-playing adventure game that will take hours and hours to get through. Plus, your decisions in the game change the outcome, so you can replay it over and over to experience a different ending. Oh, and there are no micro transactions to interfere with your enjoyment of the game.

If you like classic RPGs, then you will enjoy sinking your teeth into this adventure. It has all of the classic game mechanics, like deep storyline, expansive exploration, and more. If you don’t really know anything about the genre, you may find the sticker price a bit too high. I don’t blame you. You have to be a fan of classic RPGs to understand just how awesome the Avadon series is. Download it in the App Store today.

If you haven’t already, be sure to pick up Avadon: The Black Fortress HD and Avernum: Escape from the Pit HD for your next RPG fix.

Will you be investing in this Avadon sequel?