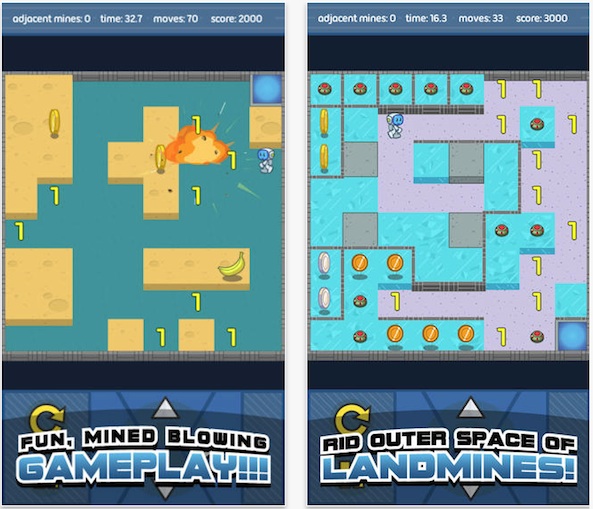 Minesweeper is a puzzle game where players must avoid landing on mines by selecting a square on a grid and determining the mines’ whereabouts based on the revealed number of adjacent mines that appear when a square is selected.

Sokoban is a puzzle game where players must get through a labyrinth by moving boxes around to push them out of the way. Boxes can’t be pulled, so players must use strategy to determine the best way to clear the path without getting boxes stuck in the way.

Astro Minded: Galactic Bombsquad is a puzzle game that includes both minesweeper and Sokoban. Good luck with that…

Players are in control of an astronaut miner named Wally. The goal is to get him from the starting point to the end portal without getting him killed by stepping on a mine.  Collect coins, reveal power ups, and get out while the getting is good. 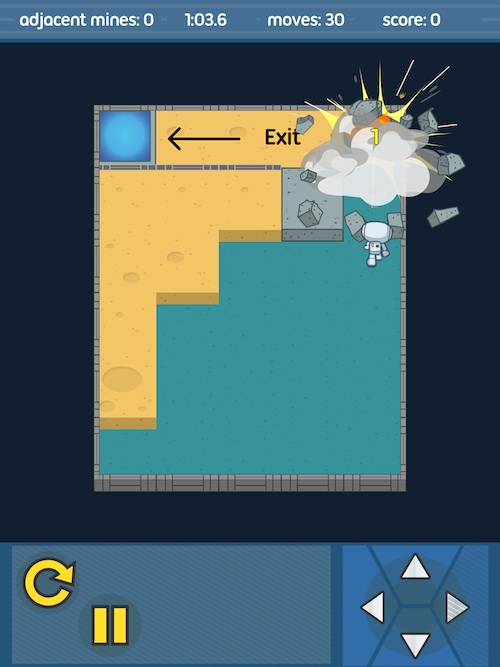 Move Wally by tapping the direction you want him to go. You can either tap the screen or use the virtual controller at the bottom. He will move forward one square and reveal what is underneath. If it is a mine, the game is over. If it is not, you can keep going.

If Wally steps into a square that is adjacent to one or more mines, a number will pop up. When that happens, players must tread lightly and try to avoid stepping on the hidden mine. You may know that there are two mines in adjacent squares, but you don’t know which two.

Coins, food, and shields are scattered around each level. There is no mine underneath a square that has a bonus item hovering above it. So, you can safely grab those goodies without fear of exploding. That doesn’t mean that every square surrounding the item doesn’t have a mine. 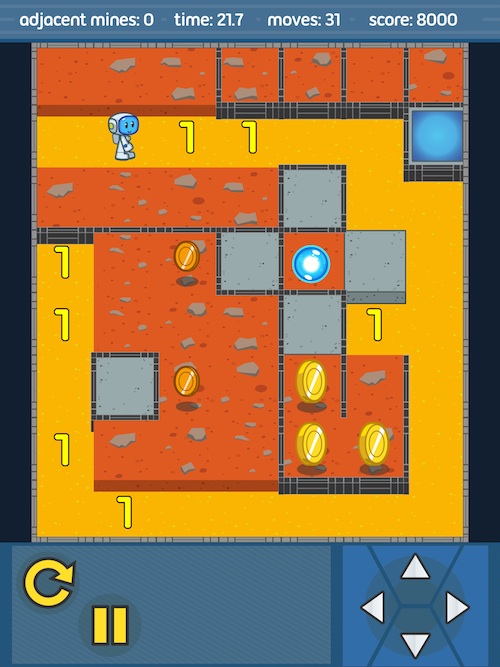 To explode a mine without suffering damage, move the available blocks around. If you run into a mine, the block will take the damage. Blocks aren’t indestructible, though. They will take three hits before being destroyed.

On some levels, players will find a shield. The shield works similar to the blocks. Only, instead of pushing objects around to explode mines, players can walk right over them. A shield can take three hits before it is destroyed.

There are 50 levels across three different planets. The first 18 levels are free. After that, you can unlock the entire game for $1.99.

Astro Mined is available on the iPhone, iPad, and iPod touch. Download it for free in the App Store today.

Are you a fan of minesweeper or Sokoban? Does Astro Mined look like fun to you?