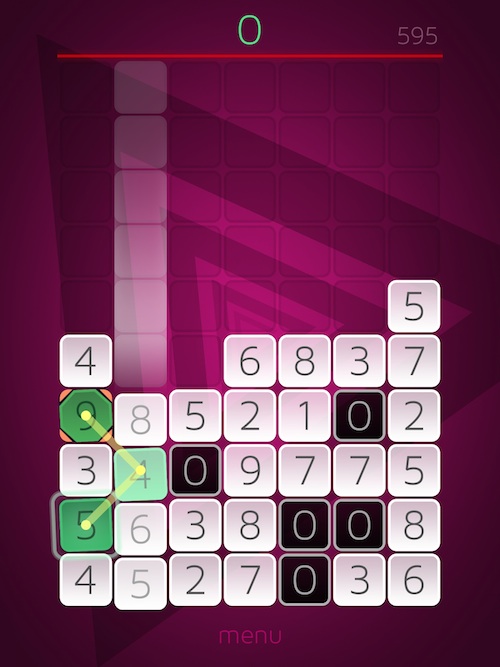 When you see the word “math” or “subtraction” in a title, you probably have a preconceived idea of what the game will entail… learning. Most of the time, educational games are synonymous with boring.

Nozoku Rush may be about math, but it is not about learning and it is not boring. In fact, you have to already be pretty good at quickly answering subtraction equations in order to score well…

The game features a 10 x 7 grid that fills with tiles. Each tile has a number between zero and nine. The zero tiles are black. There are also tiles highlighted in blue and orange. These colored tiles represent power up items.

The background is either a shade of blue green or fuchsia. There is a rotating triangle present in the background.

When your tower of tiles starts to get too tall, the column that is getting out of hand will blink red to let you know it needs to be reduced or you will lose the game. 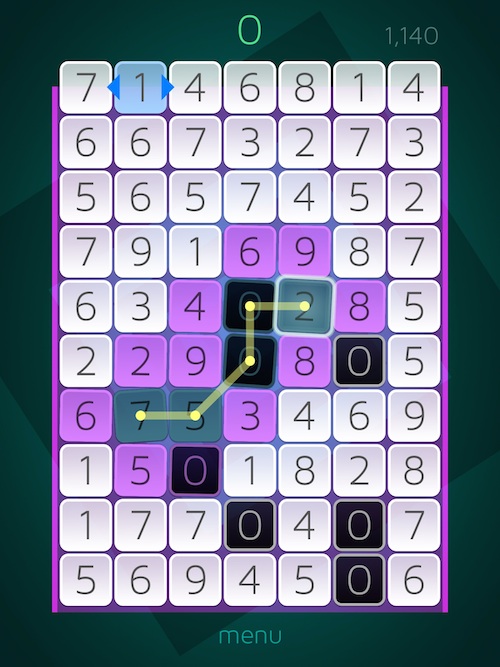 There are two different types of games in Nozoku Rush. Just as the title suggests, they are both fast paced. Rush mode requires players to keep the board low by removing tiles before they reach the top. The longer you play, the faster the tiles drop. In Race mode, players try to score as many points as possible within a certain amount of time by removing tiles on a full grid for approximately two minutes.

To remove tiles, players must connect two or more numbers that will equal zero when subtracted. For example, if you select seven, five, and two, the result of subtracting all three numbers would equal zero. Tap or swipe the last number tile to solve the equation. If it equals zero, all tiles will disappear.

Your equation must make sense. Even though seven minus five and two equal zero, five minus seven and two do not. Your first tile must be the starting number. You can include zeros with your equation to get more tiles removed at one time. For example, if two fives are separated by a zero, you can select all three tiles to successfully remove them from the board.

Your high score will be saved to Game Center and you can share your success on FaceBook and Twitter, which I have not done yet because I found that I am surprisingly bad at subtraction when put on the spot. 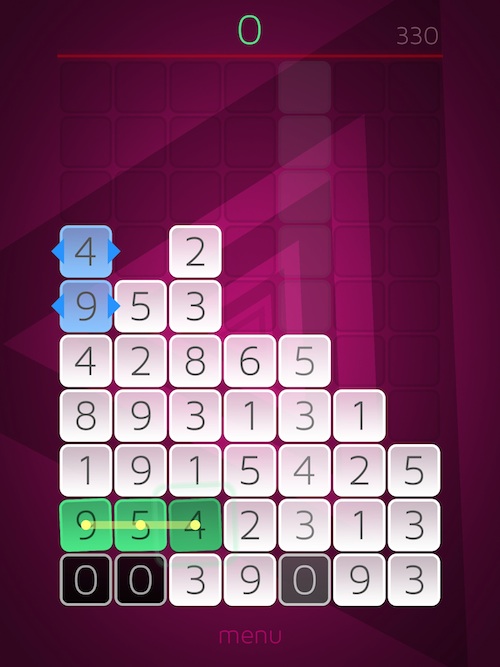 This is basically a matching game with a twist. Instead of trying to connect three red gems to remove them from the board, you must connect two or more numbers. This is way more exciting than a simple matching game.

Because of my subtraction inadequacies, I found the game to be a little too fast at the beginning. With a bit of warming up, I think I could get a much better score. I’d like it if the tiles dropped a bit slower at first.

Nozoku Rush costs $2.99. This is a surprisingly high price for a matching game. Normally, games like these are $0.99. Only really fancy ones run at such a premium. However, it is very polished and smooth and works great. The replay value is through the roof since your only goal is to score higher.

Fans of matching games should definitely check this out, especially if you are not afraid of numbers. The math is very easy, but the challenge comes with trying to remove tiles with a very limited amount of time. If you are willing to risk the relatively high price, it is a worthwhile title. This game is available on the iPhone, iPad, and iPod touch. Download it in the App Store today.

This game reminds me a lot of SpellTower, but with letters instead of word, which I am way better at.