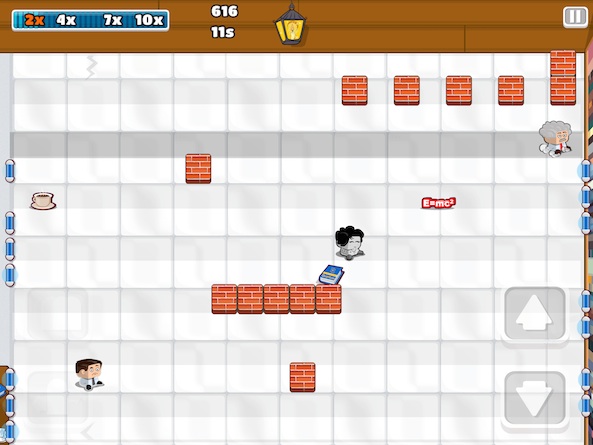 Do you remember the early 1990s television show “Quantum Leap” starring future Star Trek captain Scott Bakula? In it, the show’s protagonist, Dr. Sam Beckett, is lost in time and must solve people’s problems (“put right what once went wrong”) in order to leap into a new era, trying to make it back to his own time.

The Way Home takes the theme from Quantum Leap and turns it into a fun arcade game. Live as Einstein, a fighter pilot, even a pregnant teen to find your way back home…

This top-down arcade game features a large room where the main character, Will, bounces off of walls. He runs from one end of the room to the other, switching directions when he makes it to the other side.

There are gray people and brick blocks in various places on the screen that Will must avoid. If he runs into them, he dies.

There are also various objects strategically placed that Will must pick up by running into them. When Will runs into an object, he will switch directions and run the opposite way. Collecting objects will awaken the gray people so that Will can run into them, too, making them happy.

Will moves across the screen horizontally, automatically. It is your job to move him vertically to get to objects he needs to run into. There are two virtual buttons on the right side of the screen to move up and down. Tap one direction arrow to move to the next row. Tap it multiple times to get him down or up to a further row.

Players also get power ups, like manual rotation or slow motion. The buttons for these power ups are on the left side of the screen, each with a symbol to represent the power.

Between levels, players learn the story of Will being lost in time and the actions he must perform in order to fix some rift and move into a new body. Eventually, he will make it home (hopefully). 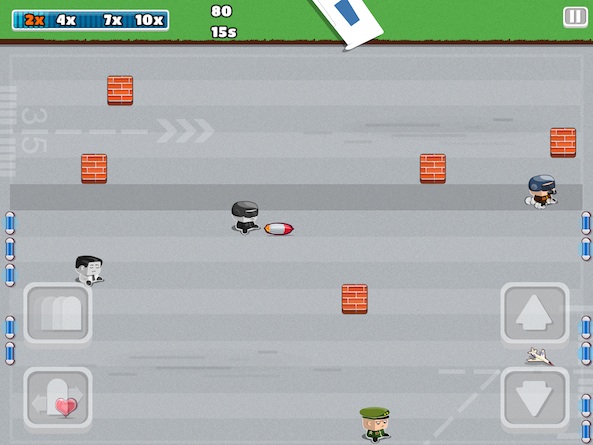 Players use the up and down arrows to move Will to different rows on the screen. When you press the “Start” button, he will race across the room in his current row. When he hits the wall, he will run back in the opposite direction.

There are brick blocks and gray people that you must avoid when moving Will around. Timing is everything. Sometimes, there is a needed object right next to a brick block. Players must run into the object and then move up or down one row as quickly as possible to avoid accidentally running into the block.

The good objects are things like mirrors, candy bars, jet planes, and calculators. Players collect them to wake up the gray people. Certain objects pertain to specific people. For example, the candy bar relates to a kid and the mirror relates to a woman.

When you collect an object and wake a person, he or she will change from gray to colorful. Move back to and run into that person to make him or her happy. When a person is happy, he will bounce. When you’ve made the last person happy, you will have successfully completed a level.

Between levels, players learn about Will’s existence and what he is supposed to do in this new body. He may have to help a fighter pilot eject from a crashing plane, or help Einstein out of a formula pickle.

Players have five lives at the beginning. Plus you start with seven “Second Wind” chances, which basically lets you continue a level from where you left off and also keeps your lives intact.

After using up your Second Wind chances and losing all of your lives, you must wait to restore one life every 15 minutes. You can get more lives by sharing your progress on Facebook, Twitter, or Instagram. You can also double your lives or even unlock infinite lives for $6.99 through the in-game store. 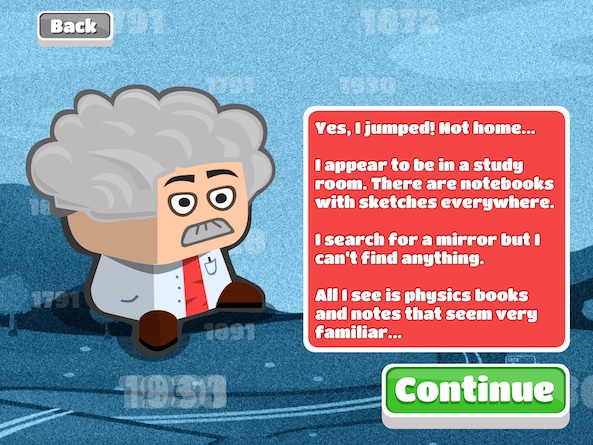 The game’s mechanics are unique and challenging. I’ve never played a game like this. It could potentially spawn a lot of clones.

The story that goes along with the game is almost as interesting as the game itself. I can’t wait to see whose bodies I will time travel into next.

There seems to be a glitch when played on the iPhone. It appears that you never run out of lives. Ever. Believe me, I tried. I must have run into brick blocks two-dozen times, wasting all of my second winds, but never losing a single life (I guess that isn’t exactly “bad” for the player).

Additionally, there is a completely opposite glitch on the iPad that doesn’t replenish lives when the game is not running in the background.

The Way Home is free to download. Presumably, the game’s developers hope to make money when you don’t want to wait to replenish your hearts and buy upgrades in the app. However, due to what I can only assume is a glitch in the system, you can play it infinitely on the iPhone without having to wait for lives to replenish. Conversely, playing it on the iPad might leave you waiting for way too long to get even one life to replay a level with. My suggestion: get it on the iPhone.

This game is simple and fun and definitely unique. The story is clever and witty. It is fun for mobile gamers of all types. Since it is free to download and play, I highly recommend getting it on the iPhone. However, I am less excited about the iPad version since the glitch keeps you from getting more lives at times. You can download it in the App Store today.

I’ve never really seen a game like this before. Any suggestions?

What do you think of The Way Home? Are you already addicted to it?