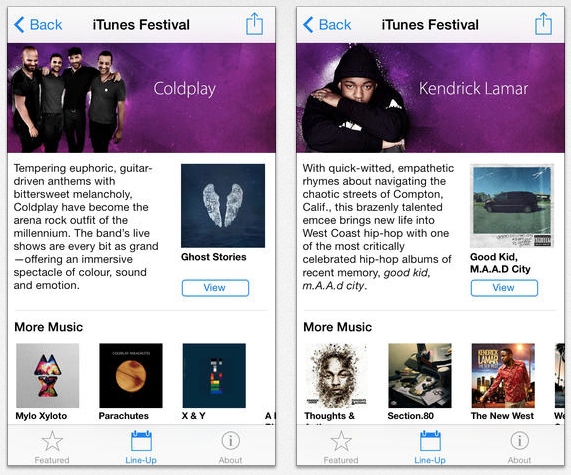 Apple has released version 5.0 of its iTunes Festival app this afternoon, updating the app with information pertaining to next week’s Festival at SXSW and an all new iOS 7 design. The Festival takes place March 11-15 at ACL Live at the Moody Theater in Austin, TX.

This will be the first time Apple has hosted one of its iTunes Festivals within the United States, and the lineup we’ve seen so far has been star-studded with musical acts like Coldplay, Imagine Dragons, Pitbull, ZEDD, Kendrick Lamar, Soundgarden and several others…

As noted by MacStories, while the updated app can be opened on iTunes or the App Store via this link, it isn’t available for download. The app’s iTunes page shows updated screenshots, a new icon, and a 5.0 changelog, but iTunes returns a ‘temporarily unavailable’ error.

Also of note is that the app says that it requires “7.0 or later,” which directly conflicts with yesterday’s report from Daring Fireball’s John Gruber. Citing sources within the company, Gruber claimed that the new iTunes Festival app would require users to have iOS 7.1 installed.

Update: the app is now officially available for download in the App Store, and we can confirm that iOS 7.1 is not required. It’s still unclear at this point if the app contains a feature dependent upon the firmware update or if the original report was just incorrect. Stay tuned.