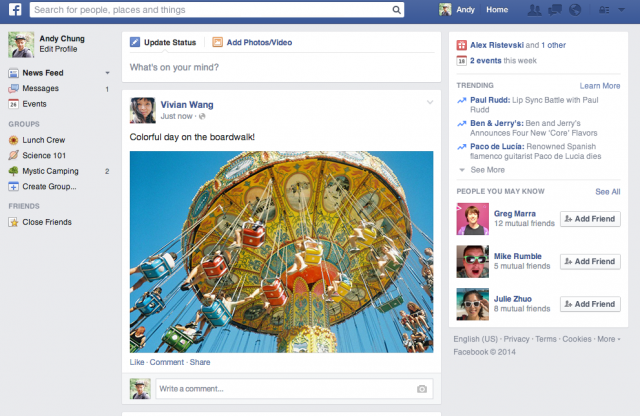 Precisely 364 days ago, Facebook held an event announcing a major redesign which promised to turn your News Feed into a “personalized newspaper.” As we noted in our hands-on with the new News Feed, the  two-column layout featured prominent shortcuts to your About, Friends and Photos sections, with all-new Movies, Books and Photos items in your About view indicating what you read, watched and shared. There was also an Instagram Timeline app and a few other tweaks.

The problem is, users hated it so Facebook has never gotten around to rolling it out to its 1.2 billion users (it was enabled for a single-digit percentage of Facebook users). After spending months refining its look and implementing changed based on user feedback, Facebook on Thursday has finally begun switching its user base to the new News Feed where your “stories have a streamlined look with bigger photos”…

It looks more stylish and less cluttered thanks to bolder photos and the use of the Helvetica font on Macs and Arial on PCs. In fact, it reminds me of the current mobile News Feed – it even uses the same iconography and story card design.

The white background has been replaced with a gray one and your profile name, Favorites, Groups, Friends and Games are still listed in the lefthand column, with the News Feed in the center and Trending items, People You May Know, and Notifications on the right.

Photos in your News Feed are now full width, with multiple images coming up as a collage. Individual News Feeds like All Friends, Photos and Groups have been removed from the drop-down menu of feeds. As for the re-worked lefthand column, you’ll always get the same number of links regardless of the screen resolution.

Seen top of post: the new, new version of Facebook’s News Feed, which will start rolling out to users later today. Notice how Facebook moved profile photos back inside story cards, which helps declutter your experience. By comparison, pictured below is the current News Feed most people got used to by now. 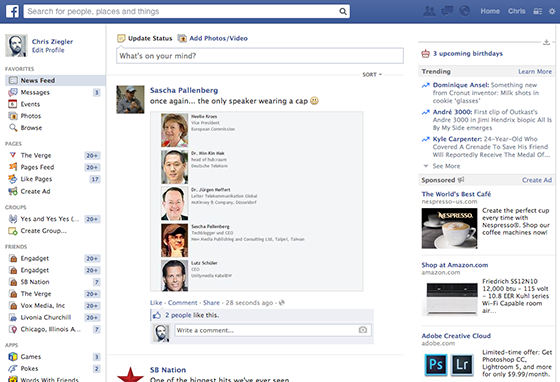 For those wondering, nothing has changed in the way Facebook surfaces content in the News Feed. The same goes for ads and advertisers.

English-speaking users can now use the bigger search bar at the top to run complex Graph Search queries such as ‘posts about Miley Cyrus from my friends,’ ‘my photos from last year,’ ‘posts by my friends about dogs’ or some such.

Non English-speaking Facebook users will see ordinary search results that surface only people, places and Pages. There are also some new card layouts. 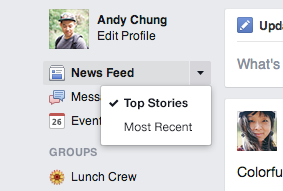 For comparison’s sake, here’s the original News Feed redesign which fell on def ears with most people, prompting Facebook to scrap it for good.

If anything, the new News Feed doesn’t break muscle memory so you won’t need to relearn anything, a huge factor considering the Facebook community lashes out at the company each time it tinkers with their News Feed and overall layout.

Over the last year, we’ve spent a lot of time seeing what people were saying, what was working, what wasn’t working, and we’re rolling out the version that takes all of that feedback into account. Some parts weren’t working and were just getting in the way for people.

The publication notes that Facebook’s recently released Paper app started out as “a yet another vision of changing the News Feed”, though was spun off into its own standalone project to work more effectively.

This is a staggered roll-out so don’t panic if you don’t see the changes yet as the social networking giant will be enabling the new look for everyone in the coming weeks.

The new News Feed look only affects Facebook’s desktop web interface: your mobile interface and smartphone apps have not changed the slightest bit.