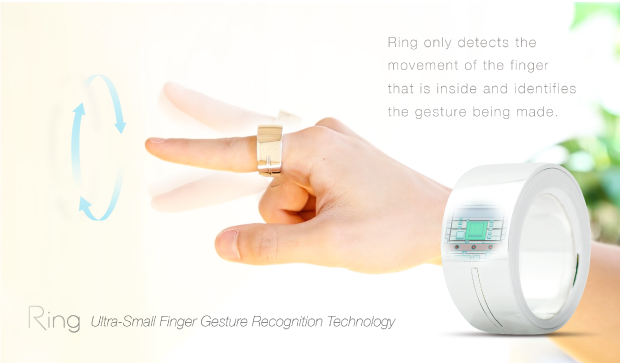 Around this time last year, Topeka Capital Markets analyst Brian White made headlines for a note he sent to investors regarding the ‘iRing.’ White said that Apple was working on a television set that could read motion gestures from a user who was wearing a ring-shaped device on their finger.

Well, we have yet to see the product materialize, but a company called Logbar is looking to change that with their new Kickstarter project. It’s called ‘Ring: shortcut to everything,’ and once connected to your mobile device, it allows you to send texts, control your home appliances, and more…

I couldn’t find what the Ring is made of, but the developers say it will come in 6 different sizes and unfortunately it’s not waterproof. There’s a lot of tech built in such as motion sensors, LED indicator lights, and a touch sensor. It also has a rechargeable battery that lasts 1000 gestures per charge.

The Ring connects to your device—iOS 7 iPhone, iPad, iPod touch, Android and Windows Phone—via Bluetooth Low Energy. And once connected it’s capable of inputting text and controlling mobile apps via gestures. Use it to turn your TV on, write a text, and it even vibrates for various notifications.

Where the Ring really gets interesting, though, is in mobile payments. When used with GPS or iBeacon technology, the device allows you to authorize mobile payments by simply making a checkmark-like gesture, or signing your name in mid-air. I imagine, though, retailers would have to support it.

Logbar says that they have a working prototype of the Ring and they are ready to start mass production, thus the Kickstarter campaign. And with over 30 days left, the company has raised nearly double their initial funding goal—at the time of this writing it’s approaching close to half a million dollars.

If you’re interested, you can still get in at the early bird price of $165. As for me, I feel like this is one of those products you need to actually play with before you make a decision. It seems like making in-air gestures to text and control apps would get a bit tedious, but it’s hard to tell from photos/videos.

What do you think of the Ring?