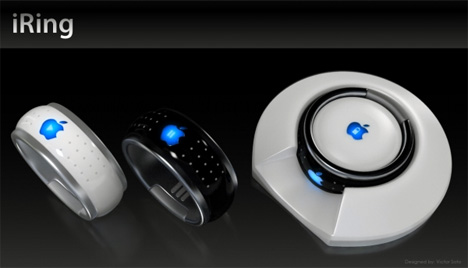 A rumored standalone television set from Apple dubbed iTV continues to be the subject of tremendous speculation, with one analyst recently citing supply chain checks allegedly pointing to a 4K Ultra HD set being built by Apple’s manufacturing partner Foxconn and slated for an early-2014 launch.

Another analyst now joins the conversation with some pretty wild predictions, also based on – you guessed right – checks with Apple’s suppliers. Brian White of Topeka Capital Markets told one publication Wednesday that after meeting with Apple’s Asian suppliers he now sees some pretty wild stuff in the pipeline.

Specifically, Cupertino will be launching an Apple-branded television set later this year, White says, along with a motion controller of sorts called iRing and a secondary display…

As for the iRing thingie, White calls it a “navigation pointer” of sorts which taps motion gestures. It’s apparently meant to replace some of the functionality found in a remote.

He’s also calling for a second-screen experience based on a “mini iTV” screen that measures 9.7 inches diagonally, the same as Apple’s full-size iPad. He went on further, claiming the secondary display won’t be an iPad replacement.

For all we know, White may have mistaken that secondary display for a dedicated iPad app. Be that as it may, the mini iTV could also be used for home security, phone calls, video conferencing and what not, he wrote.

Essentially, we believe the mini iTV screens will be able to capture content from the 60-inch iTV across a distance of up to 200 meters, allowing a user to view iTV content in the kitchen, washroom, garage, bedroom, backyard, etc.

We believe Apple will offer one ‘mini iTV’ per iTV, but package options will include up to four screens (i.e., one screen is part of the standard package and pay extra for each additional.

It gets even better.

According to White, a purported Apple smartwatch will tie in to the iTV ecosystem and complement the iRing,  basically “supplanting the need to carry a smartphone around the house.”

Furthermore, we believe iWatch will be an important part of the iTV ecosystem, tapping into iTV services in a much more mobile friendly manner, complementing the iRing.

The interaction between iTV and making phone calls will be an important feature of this experience, while the iWatch and iRing will provide increased mobility around the home, supplanting the need to carry a smartphone around the house.

He’s also being told that iTV could be “subsidized by certain service providers to expand the market opportunity.”

This is just nuts, if you ask me. At this point, with so much conflicting data points floating around it’s difficult to separate the wheat from the chaff.

If Apple is indeed working on a television set, I’d imagine the device would have to adopt functions that either don’t exist today or are too cumbersome and difficult to use.

In that regard, a motion controller of some sort certainly sounds plausible – the secondary display as an iPad app even more so – but I just cannot picture Apple shipping a tiny controller worn on the ring finger.

It doesn’t get any wilder than this, no?