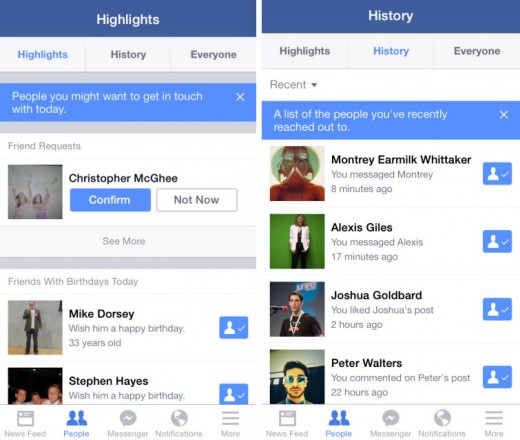 Over the weekend, Facebook posted a tiny 7.0 update for its iOS app with a change log that simply read ‘bug fixes.’ But as it turns out, the update was more significant than that as it activated a feature the company is testing on iOS right now called Highlights.

The feature is currently available to a subset of iOS users, in a new ‘People’ tab that is also in testing (replaces the Requests tab), and it offers a roundup of recent life events from your friends and family. Annoying UpWorthy posts and meme pics not included…

“After that is the most interesting part of Highlights: a list of recent Life Events from friends such as a new romantic relationship, starting a job, moving, graduating, or anything posted through the Life Events creator. If you don’t care about seeing the BuzzFeed articles and random photos your friends fill the News Feed with, this part of Highlights could give you a quick way to catch up with important milestones in friends’ lives.

Beyond Life Events is Friends With Upcoming Birthdays so you can plan to actually send them a heartfelt message instead of a shallow “HBD!” wall post. Then there’s People You’ve Contacted, which is quite similar to the History tab. And finally there’s a seemingly endless list of People You May Know.”

Constine posits that with so much overlap between the Highlights and History tabs, that he’d expect some things to be redesigned or even cut before the new People tab is rolled out to the public. Still the feature makes for an interesting alternative to News Feed.

I actually really like this idea as it would allow you to keep up with the happenings of your friends and family—really the only reason I still have a FB account—without having to put up with all the junk. I don’t care about CandyCrush scores or Josh Groban videos.

Facebook has also been caught recently testing its Graph Search on iOS devices, and made major headlines last week when it was announced that it acquired WhatsApp Messenger for $16 billion. You can download the Facebook app from the App Store for free.