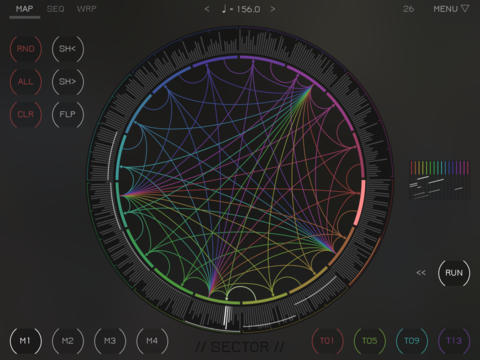 Step sequencers allow musicians to create loops using notes that are played in intervals with customized timing and duration parameters. Depending on what you are going for, they can be either complex or simple. Sequencer machines are usually somewhat heavy and take up a lot of space on a desk or tabletop.

Sector is a stochastic sample slice sequencer that offers the same variety in looping as a physical sequencer, but only takes up the amount of room your iPad does. Plus, this probability-based loop maker turns your notes into crazy mixed up sounds… 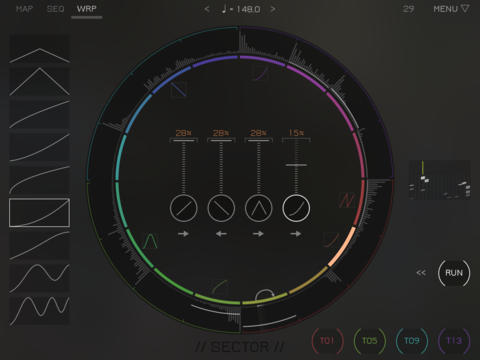 The app features coin-flip pattern variations, which affects the randomization of the modulation and warp shapes with a network of probability connections that change traditional pattern sequences into something entirely different.

First, sound is divided into sectors. The number of sectors can be as little as two and as much as 32. The sequencer then alters the sound based on the chain matrix, pattern, and time warp. All three processes control when, if, and how sectors are played.

After mapping the sectors by tapping one and then selecting another highlighted one, you can allow the matrix to perform traditional patterns, or force some sectors to play at certain times. The step probability lets you manually override randomness for 100 percent probability, which means that it will always produce a trigger and force the sector to be played, or 50 percent probability, which means there is a 50/50 chance the sector will be played (like tossing a coin). 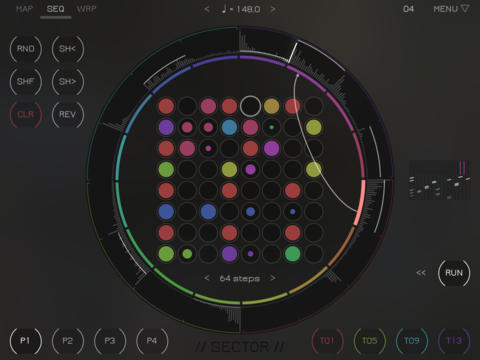 The app also allows music makers to bend and warp sounds using a transfer function. It adjusts the effects of modulations like stutters, speed, reversing, and ping-pong.

Each sector has four warp slots that can be selected to access different shapes. Select a warp slot by tapping it and then tap a warp shape to add it to the specified slot. Warp slots allow users to add glitches, stutters, and modulations.

The app includes loops by Alex Matheu, the electronic producer and studio engineer who created Glitchbreaks, and Kymatica, headed by composer Jonatan Liljedahl who created this app. However, you can also upload your own samples for a fully customized musical production. The app is compatible with Audiobus.

Sector is available on the iPad for $6.99. Download it in the App Store today.

Are you a fan of digital step sequencers? Does Sector sound like something you’d like to try?