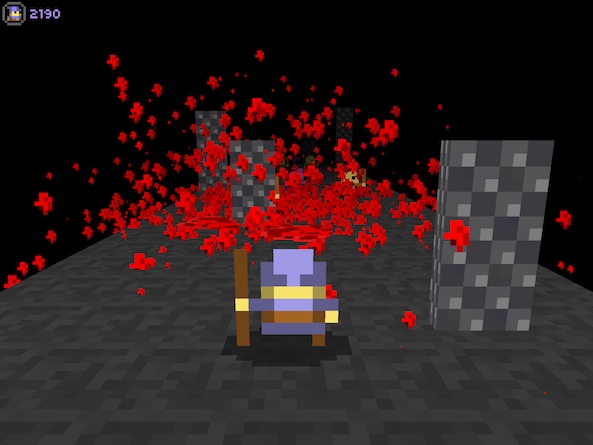 I may have mentioned this before, but I am not typically a fan of the endless runner category. I think its because I generally suck at it. I never get very far and end up frustrated at the lack of progression. However, I do appreciate games that offer an interesting twist on the genre.

Dungeon Highway is a heavily pixelated endless runner that features monsters, adventurers, and lots of blood. Grab the right power ups and your run might just be as close to endless as it gets…

The viewing angle is from behind the runner. Obstacles and monsters come at you in three dimensions. Even the blood splatter seems like it is about to land right on you face. Sometimes, your runner will be off to the side while an obstacle is in your way so you can’t see what he is up to. Luckily, things move so fast in this game that he will only be out of your sight for a few frames.

The game features one pixelated hero, dressed in purple and carrying a staff. He shoots fire at monsters as he runs. Pick up special items to change the attack spell, increase your size, and slow the run for a few seconds.

You can play the game in Normal or Hardcore mode. Hardcore mode multiplies the monster count significantly. There are also daily challenges where players’ scores are posted in Game Center.

The game features a catchy chiptune soundtrack that may or may not annoy you after a while. However, there is not much you can do about that since there is no way to turn off the music or sound effects of the game. Turning down the volume on your device is your only option. 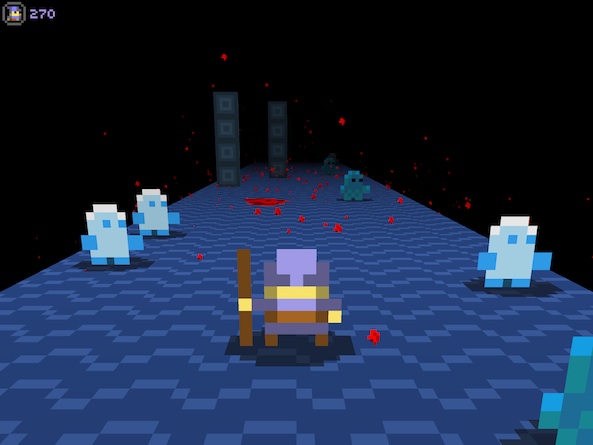 The goal of the game is to get as far as possible. Players earn points for each millimeter they run. Killing monsters, triggering attack spells, and grabbing chests of gold also increase the score. The more monsters you kill while on your run the more points you will earn.

There are only two controls, tilt to move and tap to shoot. Move from left to right on the path by tilting your device. When you tap the screen anywhere, your runner will shoot fireballs.

There are different monsters within each procedurally generated level. In the “Angry Slime Pit” players will be faced with green monsters, black gobs of goo and snakes. In the “Dark Sea” players must fight off water creatures. Every time you replay the game, you will encounter a different level than the previous one. However, not much is different other than the skins.

Players can pick up special potions that allow them to change what type of attack spell they cast. The default attack is a fireball. However, players can pick up a potion that narrows the fireball for more accurate hits or one that doubles the size of the runner. There is a potion that slows the run for a few seconds and another that gives you spray weapon attack. Experiment with different potions to figure out what your favorite one is.

The game is reasonably difficult to play. However, with the right combination of potions, you can get pretty far without cheating. For me, the blue and yellow combination works great. The blue potion has a wider area of effect and the yellow potion gives you an extra chance if you run into something (it increases your size so if you crash, you simply shrink back down).

Try your hand at the Daily Challenges to get your name on the leaderboards in Game Center. The further you go in a single day, the higher you will rank. 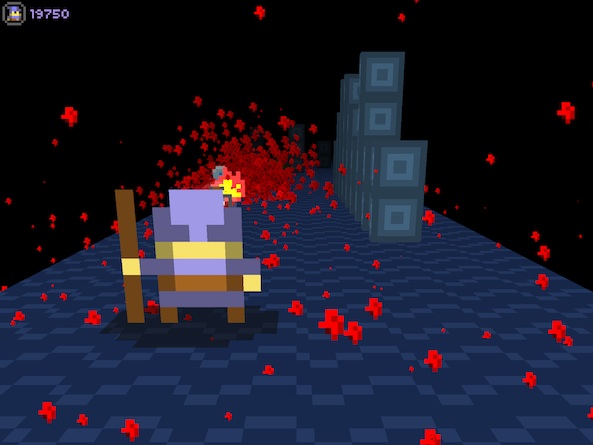 As I mentioned above, I don’t normally like endless runner games. However, I had fun playing this one. It looks good, has a fun soundtrack, and offers more than just coin collecting while running. Killing bad guys is always a bonus.

There is a glitch, that I will not mention in my review, which allows players to basically cheat the game.

Dungeon Highway is free to download and good for hours of fun. There are no in-app purchases or advertisements, so you can enjoy the game with no hidden costs.

This game is definitely worth picking up if you are a fan of the endless runner genre. If, like me, you basically suck at games like this, don’t turn your back so soon. You might discover a new love of endless runners once you see how fun it is to blast baddies into a bloody mess. This app is available on the iPhone, iPad, and iPod touch. Download it in the App Store today.

Max Axe is another endless runner game that bucks the norm. Of course, Temple Run is the most popular in the genre (not counting Flappy Bird).

What do you think of Dungeon Highway? Will you find the cheat glitch, or will you try to prove your abilities as a legitimate player?