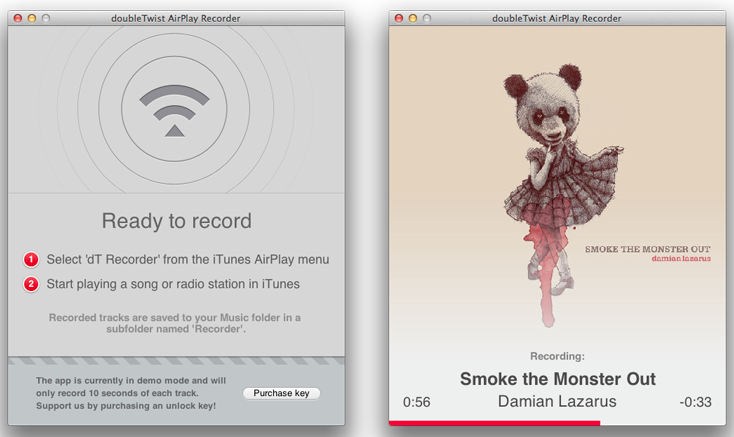 DoubleTwist, the maker of the popular doubleTwist Media Player and AirSync, the app that lets you wirelessly sync your iTunes data, has released a new app for the Mac today. It’s called AirPlay Recorder, and it’s designed to record audio using AirPlay.

The app first appeared on Android back in January, and it essentially tricks iTunes into thinking it is an AirPlay device so that it will start streaming music. From there it records audio—including that from Apple’s recently launched iTunes Radio service…

The app records the audio to a “Recorder” folder within the Music folder for offline playback. Recording audio is done in real time, and you’ll need to have a reliable Internet connection because AirPlay Recorder likes to frequently check recording quality.

So here’s the big question: is this legal? That’s tough to answer. My first thought is surely this can’t be legal, as it seems a lot like pirating to me—stealing a song without paying for it. But doubleTwist’s Monique Frantzos says recording has been around for years.

Here’s an excerpt from Frantzos’ interview with Engadget (via MacRumors):

“As for piracy or legal concerns? DoubleTwist has none. According to company Co-founder and President Monique Farantzos: “Recording has been around for decades, from audio cassettes (remember mix tapes?) to TuneIn radio’s recording feature. Given that Apple built their iPod empire on letting millions of people rip CDs based on fair use, we don’t see how they could object to this app.”

If you’re interested, you can find the AirPlay Recorder Mac app on the doubleTwist website for free. The free version is limited, allowing you to only record 10 second samples of songs, but you can unlock the full recording capabilities for just $9.99.

What do you make of this app? Do you think Apple will object to it?