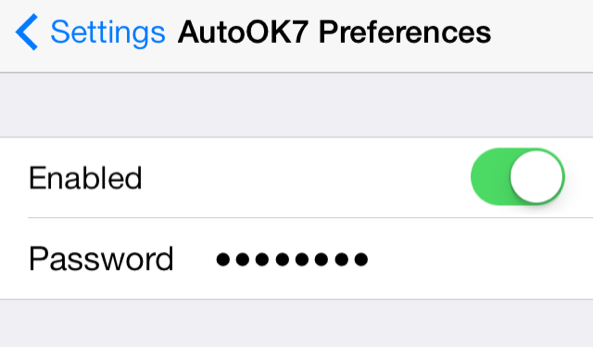 AutoOK7 is an updated version of the original AutoOK tweak that we reviewed several months back, and it serves to eliminate the need to manually submit complex passcodes after typing them. It’s not a tweak that will save you loads of time, but as the saying goes, every little second helps. Have a look at our full video walkthrough inside for a demonstration of how it works.

Once you install AutoOK7, you’ll find a new preference panel in the stock Settings. From the tweak’s preferences, you can enable the kill switch to turn it on. You’ll also need to type in your complex passcode in the password box.

After you’ve configured AutoOK, all you need to do is head to the Lock screen and type in your passcode. Instead of having to tap the ‘Done’ button to unlock your device, the passcode should be automatically submitted, thus allowing you to skip the step of tapping the ‘Done’ button altogether.

Some of you may be wondering why the tweak is called AutoOK instead of AutoDone. Previous firmwares contained an OK button next to the complex passcode entry box, and tapping that OK button submitted the passcode and unlocked your device. iOS 7 has removed the OK button, but the name of the tweak is a legacy name that has remained. That’s my history lesson for the day.

If you’re someone who uses complex passcodes, AutoOK7 is a jailbreak tweak that will save you some time when unlocking your device. Granted, it’s not going to save you tons of time, but it certainly won’t hurt.

You can find AutoOK for $0.99 on Cydia’s BigBoss repo.

Do you use complex passcodes? If so, let me know whether or not you’d consider using AutoOK7 on your daily driver.