J.D. Power and Associates published its bi-annual report on wireless customer care performance this week, ranking the top 4 US carriers based on various stats related to customer service.

The marketing research firm asked more than 7,000 subscribers how satisfied they were with the customer service they received from their cell phone provider, and here is how they scored…

As you can see in the chart below, AT&T came out on top, scoring a table-high 793. Verizon Wireless came in at a close second, and both T-Mobile and Sprint came in just below the field average. 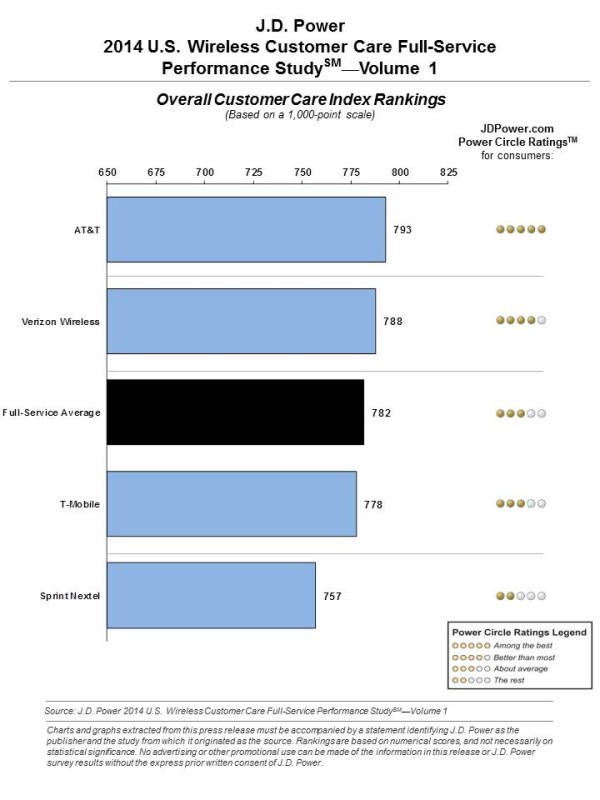 Verizon Wireless has finished first several times in the past, so you know it’s frustrating for them to lose to AT&T—the carrier that is also claiming to be the nation’s fastest and most reliable network.

But perhaps the more interesting story here is how much T-Mobile has improved in the last 6 months, passing up Sprint and inching closer to VZW. And of course CEO John Legere had to tweet about it:

It’s true, @JeffGelles! No hype here. @TMobile is the consumer-advocate. We actually listens to what people want! http://t.co/VJPeavpLCr

Proud of my teams! @TMobile is most improved and MetroPCS is top for customer care in the no-contract market! http://t.co/5Z0ndXPnOz

If I’m AT&T or Verizon, I’m starting to get a little nervous. Not only is T-Mobile the loudest carrier in the US right now, and taking their customers left it right, but it’s also making current users very happy.

Sure, the two companies still have about 2x the subscribers as T-Mobile, but if there’s any truth to the rumor that it’s working on a deal to merge together with Sprint, it may not be like that much longer.