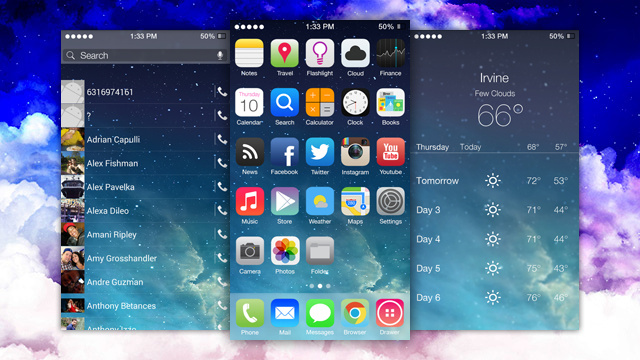 Themer, a popular Android customization app by MyColorScreen, was pulled from the Google Play marketplace last week. The app allows users to browse a selection of home screen themes, and it appears that one of them may be guilty of copyright infringement.

The theme is called ‘Seven,’ and as you’ve probably guessed by now, it looks like its creator got a lot of his inspiration from iOS 7. So Apple has filed a copyright complaint with Google, forcing the search giant to remove the app to avoid further legal ramifications…

“The theme in question is the “Seven” theme, which Apple says uses several icons that infringed on its own patents, explains Ashvin Dhingra, co-founder and CEO at Themer.

“We immediately removed [the Seven] theme and thought that, at worst, Themer would be back on Play in a few days. But now a week later, we’re facing the possibility that a few days might turn into a few weeks,” Dhingra explains in an email to TechCrunch (and soon to be blog post on the company’s website.)”

There are a few things worth mentioning here. For one, Themer isn’t just some homebrew project—it’s run by a company that raised some $500,000 in funds last fall. And two, Apple knows the theme was removed, has no more issues, and the app is still in limbo.

“We’ve spoken to legal representatives from Apple (who have been very nice, reasonable, and helpful), and they have no remaining concerns. But apparently, Google has a process for these things, and there’s nothing we can do to accelerate that process.”

But while it appears the issue is resolved with Apple, Dhingra says that his team has yet to hear from Google. Apparently there’s not a set point of contact for Android developers to go to with problems like this, so for now there’s no telling with Themer will return.