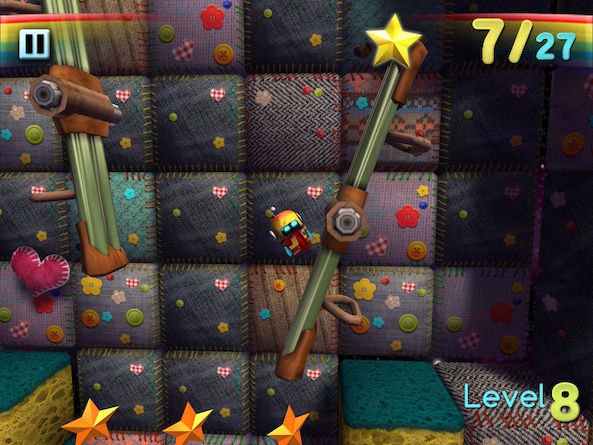 Gaming on mobile devices has gotten better over the past few years. Things have really heated up since the launch of the iPhone 5s and the iPad Air. Graphics and performance have improved greatly, making it possible for mobile game makers to create some fairly incredible titles.

Rocket Robo is a puzzle game that features great graphics, unique movement mechanics and a sprinkling of arcade action…

The first world, Material World, looks like it was stitched together with bits of old clothing, buttons, and heart-shaped felt patches. The graphics are adorable. The stitching on each block looks realistically crooked. Some stitches are further apart or longer than others. Some materials are so detailed you can see the threading. The Space Station is just as cute with gravity controls and jet-propelled blocks.

Players control a makeshift robot that propels through the air whenever you touch the screen. His motor may not be fast, but he’s got it where it counts. Tilt the screen to the left or right to move him either direction.

Rocket Robo can also move to the back of the room in some instances. If there is a star behind him, swipe upward on the screen to get him to move into the background. Whenever the robot moves behind a block, the view in front will become transparent, so you can see what is going on back there.

On each level, there will be different obstacles. There are spiky pigs, explosive mines, rotating saw blades, and more. You will also be faced with puzzling mazes that you must figure out in order to find hidden stars and get to the exit. Sometimes, rotating the cube isn’t good enough. You may need to rotate it three more times, and then go through the portal with a box before you can collect all of the stars and get out. 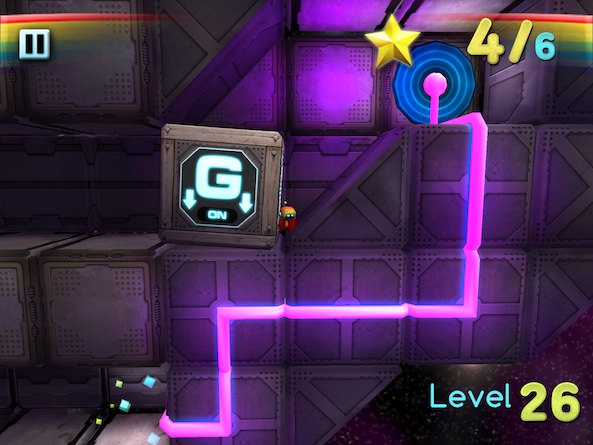 There are so many different aspects to this game that I feel like I’d be spoiling the surprise if I mentioned everything I saw. Whether you are pushing buttons to rotate the world or moving across the course by shooting through a portal, there seems to be something new on every level.

To move Rocket Robo, touch the screen and he will putt-putt, straight up into the air. Tilt the screen to the left or right to move him that direction. Keep your finger on the screen to continue to rise. If you want Robo to descend, let go of the screen. To maintain your level, get to the right height and then tap the screen intermittently to stay in the same area.

Much of the course is based on moving around through narrow hallways that snake around on a big cube. Some areas will have mines that must be exploded by pushing a crate into them. Other mines can be triggered to explode a few seconds later. There are spiky creatures that will bust you to bits if you touch them. However, many of those Spiny-like creatures will be hiding a star inside of them, so try to kill them by timing a mine explosion while they are nearby. Some stars are waiting in the background. Swipe your finger upward on the screen to move into the background. You may need to be in the background to get to a particular area of the course as well, so don’t forget to use that feature whenever you can.

On each level, there is a specific number of stars. Some levels only have a few, while others have dozens. The goal is to collect all of the stars on each level before moving on. You are not timed. So, feel free to explore every nook and cranny of the course until you find everything.

Once you’ve collected all of the stars, head for the exit. It looks like the finish line of a racing course. As soon as Robo touches the black-and-white stripes, he will leave the level. So, don’t touch the exit until you are sure you are ready to go.

There are 24 levels in the Material World and 24 on the Space Station. The third world, Sugar Cube, is not ready for gameplay yet, but will be coming soon. I can’t wait to see what that world will look like. 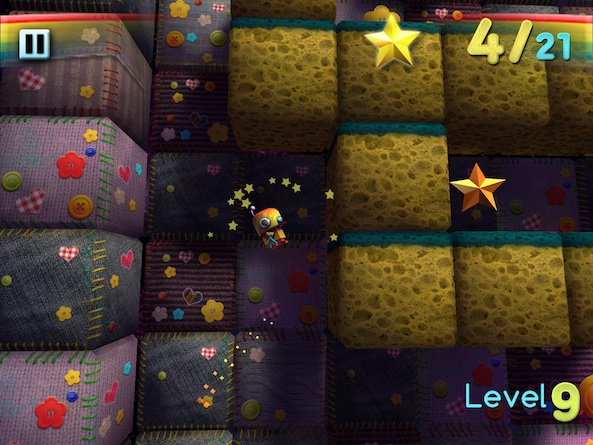 This game reminds me of a mix between Little Big Planet and Portal. I think it’s because you move through portals on some levels and might have to bring a block with you to use in a different area. This is not just a puzzle game, though. It is more of an arcade game than anything else.

The graphics are great and I love the detail that goes into the backgrounds. Every level had something new to surprise me with, both in the graphics and in the game mechanics.

Don’t’ skip the story at the beginning. It is pretty cute. You can find it on the first splash page under “Story.”

If I had any complaint, it would be that I was able to race through the first 24 levels in less than an hour. However, the Space Station is significantly more challenging, so I don’t think it makes the game too short in the end.

The game costs $0.99, which is a great value for a game like this. You can replay levels if you don’t find all of the stars. The game’s developer promises to add another world. Who knows, if it is popular enough, the updates might keep coming for as long as the game’s maker has inspiration.

I highly recommend this to fans of casual games. It mixes a bit of arcade mechanics with puzzle challenges. Nothing is ever so difficult that you don’t want to go on, but the levels do get harder by the second world. This game is available on the iPhone, iPad, and iPod touch. Download it in the App Store today.

Paper Monsters is another cute arcade style game that lets you move into the background to play. Kosmo Spin is a pretty cute game, too.