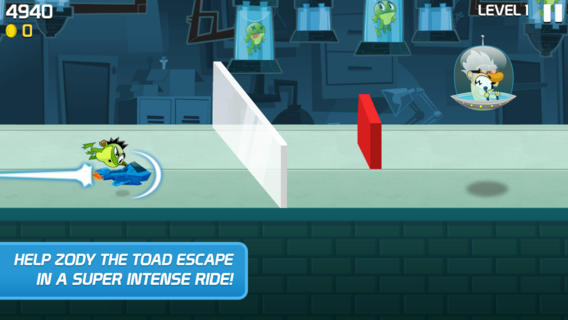 Good news for those longing to relive their glory days in the form of a nostalgia-evoking video game. Toad Rider, a new iPhone and iPad game inspired by the classic NES title ‘Battletoads,’ is now available in the App Store.

The game was actually modeled after one specific part of the original Battletoads game—the notorious Turbo Tunnel level that has you maneuver your hoverbike around obstacles. And it makes for a great endless runner…

Some noteworthy features from the game:

– Move swiftly with your hoverbike around tricky obstacles.
– Take down evil scientists before they shoot you!
– Dash into glass walls to survive.
– Perform cool, amazing stunts.
– Experience awesome dynamic lanes.
– Pimp your jet. Pimp your toad.
– Compete with your friends on Game Center and Facebook!

And the obligatory gameplay video via iAndy:

As you can see, the game itself is pretty straight forward—it’s your typical runner. Swiping up or down will make your hooverbike change lanes, which you’ll want to do in order to avoid hazards such as walls and fire and collect coins.

Toad Riders also offers up items like power-ups, additional characters and new vehicles, which you can unlock by either collecting coins or via in-app purchases. Don’t worry though, they aren’t annoying and don’t impede gameplay.

If you’re interested, you can find Toad Riders in the App Store, for both iPhone and iPad, for $1.