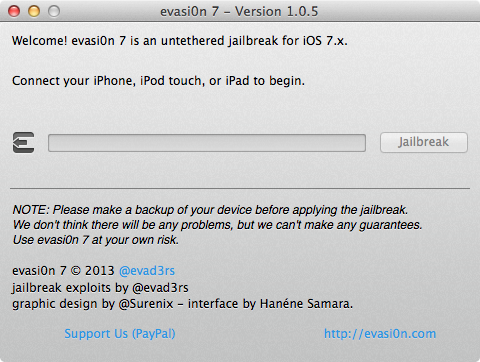 A week after the official release of iOS 7.0.5 to the public, evad3rs have released an update to their evasi0n7 jailbreak tool, bringing it to version 1.0.5.

iOS 7.0.5 was released last week to most users outside of the United States, and didn’t bring much to the table. Still, if iOS 7.0.5 is available to you, we suggest you update, then use evasi0n7 1.0.5 to jailbreak your device…

As always, this version of evasi0n7 is compatible with any device capable of running iOS 7.

You can download evasi0n7 1.0.5 from our download page. For those of you who aren’t sure how to use the tool, we also have a Mac tutorial and Windows guide to walk you through the whole process.