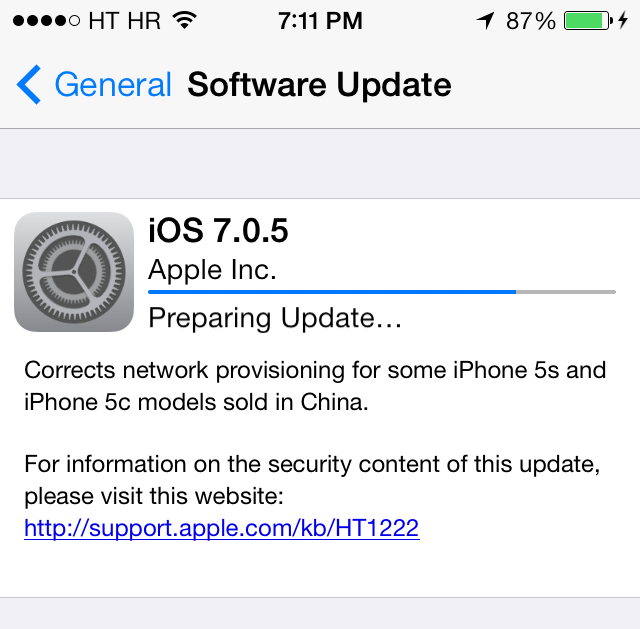 Apple has released a public update for iOS this morning, bringing the firmware to version 7.0.5. The release comes more than two months after iOS 7.0.4, and appears to only bring about a handful of bug fixes.

In fact, what the change log says is that the update is only available for certain models of the iPhone 5s and iPhone 5c sold in China—meaning many won’t see it. It corrects network provisioning for the handset…

The update is available either over the air, by visiting Settings > General > Software Update, or by plugging your device in iTunes. And as always, you can find 7.0.5 and all the latest firmware on our Download page.

Again remember, this update is for select iPhone models only, so many of you likely won’t see it.

And that’s probably not a bad thing, as we currently aren’t sure whether or not the update is safe for jailbreakers. So even if you are seeing iOS 7.0.5, it’s best to stay away from it until we get confirmation that it’s ok.

If you do happen update, please feel free to let us know if you notice anything new or improved by emailing tips@iDownloadBlog.com, or making a comment down below. We can also be found on Twitter, here.

Update: while we are not seeing iOS 7.0.5 here in the US, we are getting reports that users in Germany, the UK and Croatia are. So despite what the above change log says, it appears that it’s not limited to just China.