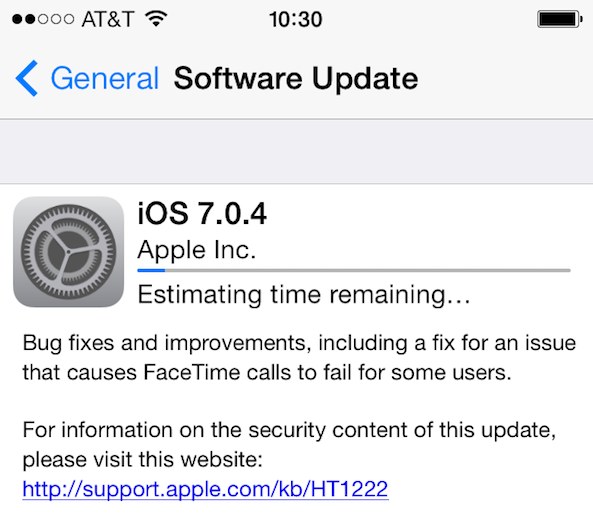 Apple has just released iOS 7.0.4 for iPhone, iPad, and iPod touch. Along with the usual bug fixes and stability improvements, iOS 7.0.4 fixes a bug which would sometimes prevent users from making a FaceTime call.

The update is available over the air, directly from Settings > General > Software Update, or by plugging your device in iTunes…

Apple also pushed out an iOS 6.1.5 update for owners of fourth generation iPod touch, also to bring a fix to the aforementioned FaceTime bug, and and update to the Apple TV firmware, bringing it to version 6.0.2.

Hacker iH8sn0w has confirmed that the update is safe for jailbreakers as iOS 7.0.4 doesn’t bring any security changes.

As always, you can find all iOS software versions, including the latest iOS 7.0.4 on our download page.

If you notice anything new or improved in iOS 7.0.4, please feel free to let us know by emailing tips@iDownloadBlog.com.