In his review of CCLoader, our jailbreak guru Jeff mentioned the fact that developers would be able to tap into the tweak and create their own sections in Control Center. That is the basis behind CCSystemStatus, a new iOS extension by vsnraindev that displays your available storage, IP address, free RAM and other system information about your iOS device in Control Center…

With numerous jailbreak tweaks available for viewing system information on iPhone, it only seems fitting that there be one for Control Center too. CCSystemStatus is enabled by default after installation, and its position within Control Center is adjustable using CCLoader. The tweak adds two lines of information to Control Center, and the section can be tapped to display a second page of info.

The eight different items displayed are your wireless IP address, cellular IP address, free RAM, average system load, wireless network SSID, gateway MAC address, and free space on both the device and /var directory. The tweak is compatible with the iPhone only at this moment, and it is available now for free on Cydia in the BigBoss repository. There are no options to configure outside of those in CCLoader. 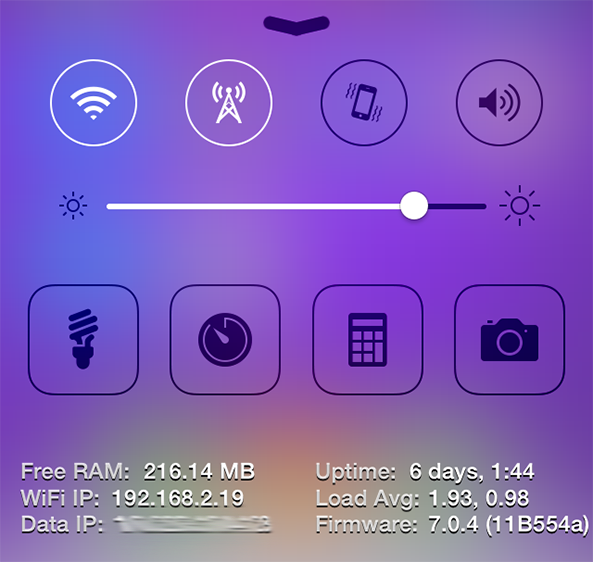 An interesting discovery I made while testing CCSystemStatus is that SpringPrefs appears to have been updated with iOS 7 support, and is another extension that works through CCLoader. The longtime tweak provides nearly identical functionality as CCSystemStatus, displaying much of the same system information in addition to device uptime and firmware version. SpringPrefs is also available on Cydia for free.

For those wondering why I only have four toggles at the top of Control Center, it is because I am using FlipControlCenter in conjunction with CCLoader. It is just one of several tweaks released for Control Center in the past few months, ranging from CCNowPlaying and CCToggles to HueHueHue and QuickActivator.