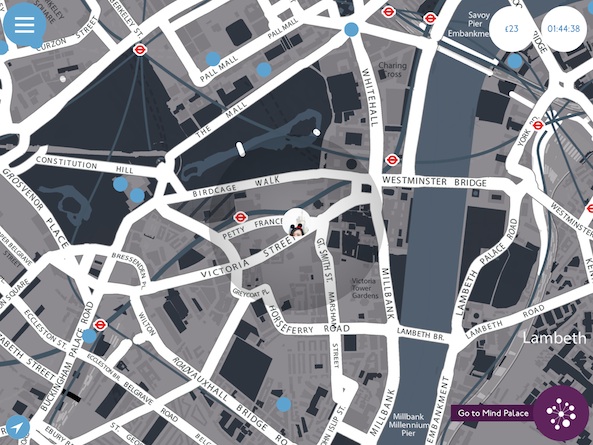 Two weeks ago, the most popular show on PBS launched the first episode of its third season. The 90-minute episodes are possibly the most popular versions of Sherlock Holmes since Robert Downey Junior donned the cap. Frankly, I think the television show is better.

Sherlock: The Network HD is a puzzle game that stars Benedict Cumberbatch (Holmes) and Martin Freeman (Watson). Join the detecting duo as they solve crimes, stir up trouble, and act like smarty pants…

The game is heavily based on the television program. When you first open the app, you will see the opening theme of the show. You will then meet with Holmes, who will break the third wall and speak directly to you. Some of the features and controls will be explained to you. Then, you will solve your first crime.

You will first show up at Holmes’ apartment where he will give you the skinny on the first crime. Then, the view will switch to the map. Here, you will be able to pick up money, which you can use to take transportation. You will also see icons for pictures, audio, and other clues that will help you solve the crime.

As an added bonus, some of the locations on the map offer glimpses into the television show. You can visit sites that appear on the show, like the detective’s own apartment.

When you are presented with a clue, you will sometimes hear audio of a phone message or some other sound. You will also read letters and even watch a video clip of relevant characters to the plot. Holmes and Watson show up regularly. 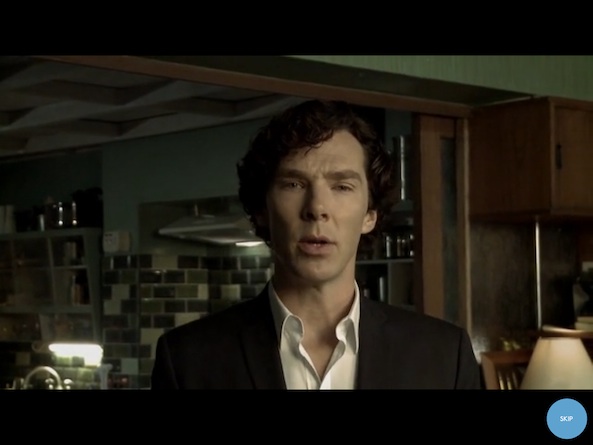 The goal of the game is to solve crimes that are presented to you as fast as possible. You will start out with a certain number of points As time goes by, you will lose those points the longer it takes to solve the crime. In addition to using your brain as fast as possible, you will also have to decide how fast you will get from one place to another.

Walking is free, but takes the longest. Riding the train is faster than walking, but slower than taking a taxi. It is also less expensive. The taxi is the priciest ride, but will get you there fast. If you solve the taxi puzzle quickly, it will cost less money.

Whenever you take either the train or the taxi, you will have to solve a mini puzzle. The train requires you to lay down track and connect two lines. The problem is that, the track you are given usually doesn’t fit with the line, so you have to work fast if you want to build the track before the train gets there.

The taxi requires you to move cars out of the way to clear a path. The cars are positioned in such a way that, when done properly, you can move some cars up or down and other cars left or right. Then, the path will be clear. If you are fast, you will only pay the minimum taxi fee. However, the longer it takes you to solve the puzzle, the more money you will pay.

Every time you figure out a clue, one of the detectives, Holmes, Watson, or Lestrade, will let you know you’ve succeeded and then give you a new lead to follow. When you’ve gathered enough clues, someone will tell you to go to your “Mind Palace.” Here, the clues that you’ve gathered will swirl around Holmes’ head. You must pick three of the clues to solve the crime. For example, one crime will have clues to street names, items, sounds, and knowledge about the victim’s history. You can tap on three clues that you think contribute to solving the crime (missing persons, kidnapping, a rogue puma, etc.). If you guess one or more correct clues, but not all three, you will be told how many were right, but not which ones. Then, all of the clues will go back to swirling and you will try again. When you get all three clues correct, you’ve solved the crime and the explanation will be given.

Afterward, you will receive payment for your efforts, which can be used to pay for your transportation. Try to earn as much money as possible. It is the best way to ensure that you will earn enough to travel in style, and take less time to solve crimes. Thus, enabling you to earn more money. 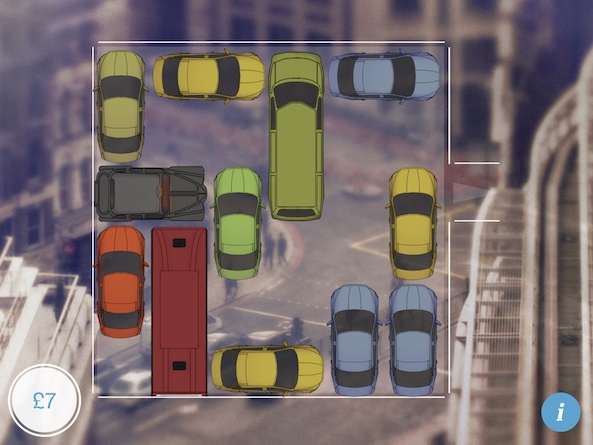 Being that I’m a huge fan of Sherlock (Sir Arthur Conan Doyle’s original books, as well as the BBC mini-series), I loved taking part in solving the crimes. They are more than just simple problems. You don’t just push a cart, climb a ladder, and swing on a rope. These puzzles require a keen eye, good memory, and deductive skills.

Being that I am a huge fan of both Benedict Cumberbatch and Martin Freeman (both star in two awesome sci-fi and fantasy films), I love the way they are filmed to appear to be communicating with you. I feel like I am hanging out at 221B Baker Street.

The game tends to load just a bit slowly. When I tap on an icon, it takes a few seconds to respond. Plus, the game crashed on me one time. It didn’t affect my game, but there was a crash.

Sherlock: The Network, both the HD version and iPhone version, cost $4.99. The price is a bit steep. However, there is a lot of content. Fans of the show will eat this up. There is a lot of interactive video and audio. Plus, you can wonder around the map, checking out places that are connected to the show.

Without hesitation, I recommend this game to fans of the television show Sherlock. Not only do you get to be a part of your own version of the story, but you also get to take part in solving crimes. If you don’t know about or care for the show, the price tag may be a turn off. The game is fun and challenging, but there are only 10 cases, so the cost may not be worth it to non-fans. You can download it in the App Store toady (iPhone version available here).

iSherlock is a companion app for the show. Sherlock Holmes and the Hounds of Baskerville is a point-and-click adventure game.

Are you a fan of Sherlock? Will you help him solve these crimes?