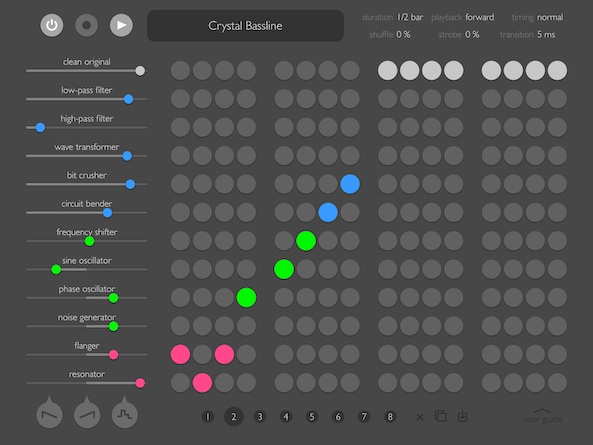 I love music. I am a big fan of all genres. Whether its orchestral music from the 1950s, 1980s Goth, thrash metal, or hardcore punk, I’ll give just about anything a spin at least once. I also love music-based apps, especially the ones that let you create music.

Sequential for iPad is a music app that lets you create dance-friendly sampling loops that can be added to tracks you are already working on in other programs. Don’t be intimidated. You don’t have to know how to write music to have fun. You just have to feel the beat…

What caught my eye when I first saw Sequential in the App Store was its similarity with Yamaha’s Tenori-on. The digital musical instrument allows users to create sounds by pushing different buttons. Although this app doesn’t have quite the variety of the Tenori-on, it definitely has the same visual-performance feel. Sequential also lets you fine-tune each effects track with a few additional effects.

The screen is made up of four sets with either three or four columns in each. There are 12 rows, each with a slider bar for fine-tuning the individual effect. There are eight different “scenes” so you can create different loops and move between them during your performance. Below the fine-tuning sliders sits three modulation buttons that adjust the sliders all at once in a particular order while you hold them down.

There are 34 effects packages, including four demos. However, you are not limited to what comes with the app. You can import loops from other apps, and even import your own, customized loop that you’ve created in Sequential.

You can also alter the way the effects playback by adjusting the duration, playback and timing of the audio file and playback rate. Change the length, duration, or crossfade time of effects with shuffle, strobe, and transition.

When you are ready, you can record real-time performances and then copy and paste them into another app, or export them to your computer using iTunes file sharing. 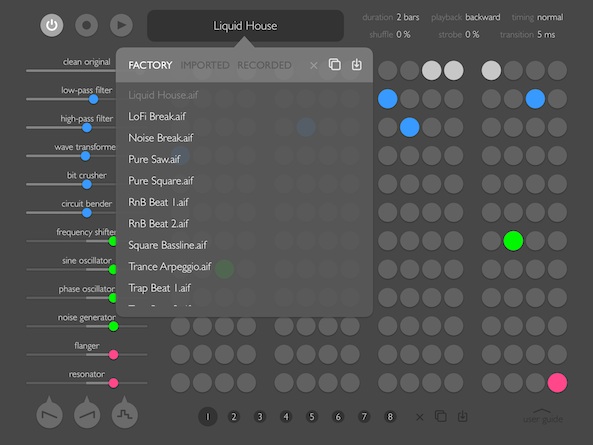 The first thing I did when I opened the app was to push a bunch of buttons to see what would happen. The results were awesome, which shows that you don’t have to know what you are doing to make some sweet sounds. After goofing off for about 10 minutes, I actually read the user guide to check for features I hadn’t already figured out from just playing around with the app.

The first thing you will need to do is load a sound file. Tap the file at the top of the screen to get started. If I remember correctly, the default file is Acid Bassline. Tap it.

Then, select a sound file to get started. If you don’t know what to do, try a demo file to get an idea of what Sequential is capable of.

To change an effect, tap the row that is related to the change. Categories are clearly labeled with different colors. Blue is for spectrum. Green is for oscillator. Pink is for time. Fine-tune the row by adjusting the parameter slider. Unipolar sliders are based on minimum to maximum adjustments, while bipolar sliders will apply a different effect to the left or right side.

The three buttons at the bottom left side of the screen give you the ability to change the parameters to either rising, falling, or random modulations in real time. They only work when you hold them down. Use them during a life performance, or while recording your loop.

There are eight separate scenes so you can switch between different effects. Create different parameters for the sound file for multiple scenes to create changing effects in real time. The scenes are available by tapping one of the number buttons at the bottom of the screen.

In addition to altering the effects of each beat that the sound makes, you can also adjust the transport settings. Some audio files are longer than others, so you will need to change one or more setting. Drag the duration setting from left to right to adjust it. Tap the playback setting to switch between forward and backward.

Change the timing from normal four-four beats to triplets. When you tap the timing toggle, the grid will switch between sets of three or four columns. Additional transition features will alter the length ratio, decrease the duration, and adjust the crossfade time between effects. Experiment with each to get the sound you like the most.

The file will automatically be saved to your recorded file browser. You can then tap the copy button at the bottom, which will copy the file to the general pasteboard so you can paste it into another app that supports the copy/paste feature. You can also export the file by connecting your iPad to your computer and syncing with iTunes file sharing.

Loops that you’ve recorded can also be used as sounds that you can extend the effects adjustments. For example, I recorded a dubstep track and then used it to add more effects. The recorded track will have the new effects as the “clean” effect and you can add more tweaks to the sound file. You could, potentially, add more and more effect to the original sound file until it is a completely distorted mish-mash of sound. 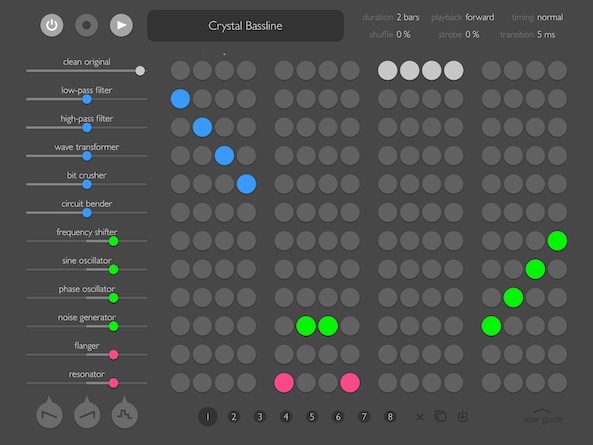 The app is very easy to use. Experimenting with possibilities helps you learn everything Sequential is capable of. The few features you can’t figure out on your own are clearly explained in the user guide.

Files can be easily exported. It can be as simple as a copy-and-paste action in some compatible apps. Export through iTunes file sharing makes it possible for you to send the loop to any app that supports .aif files.

Some of the user interface actions are awkward. For example, whenever you load a new file, it automatically starts it from the clean effect. I’d love to be able to switch between files while the effects I’ve created remain the same throughout. That way, you can see what it sounds like with different sounds.

Sequential for iPad costs $4.99, which is the perfect price for an app like this. It offers unlimited sound options without being overwhelming or hard to understand. It may seem basic on the surface, but after delving into the features, you will see that it offers lots of components with deeply integrated effects tweaks.

I love it when a music-making app is so easy to figure out that anyone can use it. If you have any interest in creating sound loops, even just for fun, this is a great app for experimenting with the various effects alterations that are used for producing and mixing interesting samples. Sure, five bucks is a lot for an app just to mess around with. But, maybe you will discover that you were meant to be a deejay. Download it in the App Store today.

Yamaha’s TNR-i – US is another sequencer that lets you activate sounds by pushing buttons on a grid. The TNR-e – US features electronica and dub step beats.