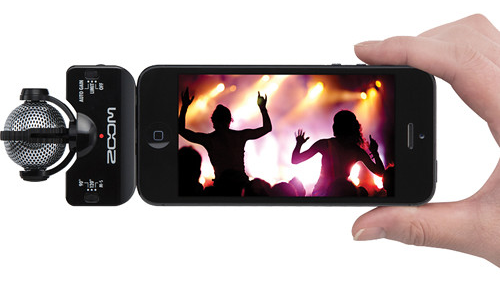 Announced at the National Association of Music Merchants trade show yesterday, Zoom’s new high-fidelity microphone for Lightning-enabled iOS devices – the iQ5 – not only has the looks, it brings studio-quality 16-bit audio capture at 44.1kHz audio resolution to your iPhone, iPod touch and iPad.

Filed as the first stereo microphone for Lightning-enabled iPad 4 or later, iPhone 5/5s/5c and the latest iPod touches, the iQ5 features an analog-type mic gain wheel for precision adjustment of input levels.

If you’re serious about podcasting, recording interviews or capturing audio notes on the go, this nicely done, compact accessory could turn your iDevice into a professional-quality stereo recorder…

Zoom explains that the iQ5 features a rotating mechanism on the top that makes it easy to record audio in both portrait and landscape orientation, with the correct left-right stereo alignment. A built-in limiter kicks into action automatically to avoid input overloads.

The accessory works perfectly with Zoom’s own HandyRecorder app, as well as with the stock iOS Camera application, Apple’s GarageBand and other “popular audio and video streaming apps” that support audio input from an external microphone. 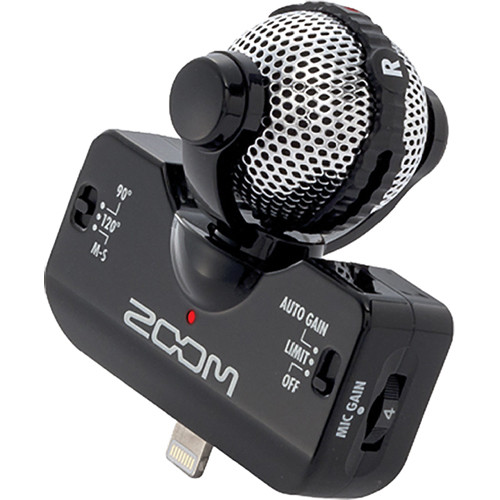 You can also record the mid and side mic signals as RAW data and later adjust the stereo width from 30 to 150 degrees in Zoom’s HandyRecorder iOS app.

This allows you to go from a tight sound focused on a single instrument to a wide image that includes the surrounding ambience and reverberation. The app even allows you to collapse the signal into phase-coherent mono, which is great for interviews, narration and other voice recordings.

Novice users will appreciate three auto-gain presets (Concert, Solo and Meeting) to quickly set the recording level depending on their environment.

The microphone is available in black and white to compliment your iDevice (sorry, no gold variant available), retailing for $99.99.