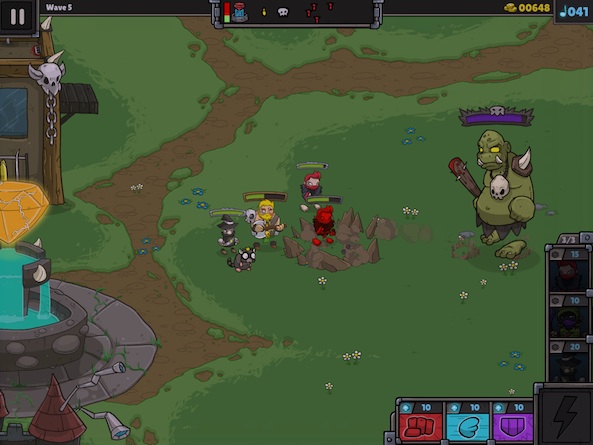 I love a good mash-up. Mix Slayer with DMX and you’ll win my heart. Mix “Shining” with a feel-good trailer and I’ll giggle. Mix role-playing games and castle defense and I’ll be glued to my iOS device for hours.

Bardbarian is a mash-up game that combines the fantasy of role-playing battles with the tactics of castle defense. Throw in some lowbrow humor and a sprinkle of metal music for good measure and you can see why it is so fun…

His name is Brad and he’s a warrior. But today, he’s sick of hacking and slashing his enemies to death. Today, he wants to shred them to death, with his epic guitar solos. So, instead of grinding away, killing and looting with his normal axe, Brad has decided to wail away, shredding and lute-ing (get it?) with his guitar axe.

The game is cartoonish and has a humorous theme. No good bard adventure is complete without a bit of tongue-in-cheek humor. The tiny-bodied, bigheaded bardbarian stays within the parameter of his village, performing musical attacks on goblins. Your job is to protect the town crystal from being destroyed by wave after wave of enemies. The entire playing field is fairly small, which is good because moving around too much will slow down your note generation.

Players earn notes to “buy” special attacks and hire helpers. You will also earn gold pieces that can be used to upgrade the hero, weapons, and townsfolk. Don’t forget to grab yourself a town pet to collect your gold for you.

There are four different sections, each based on the time of day, morning, noon, evening, and night. Each time frame features a different type of monster and has two evil bosses to contend with. You can also test your skills in Timed Survival. Here, you don’t get to use your upgrades. Your score is based on how long you can stay alive. 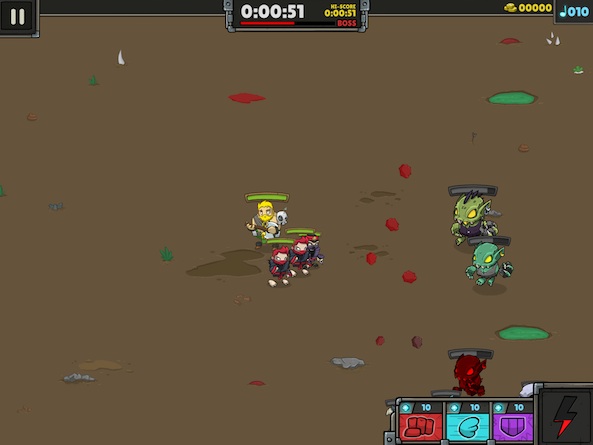 Players must protect the town crystal by performing awesome solos on an axe that has been turned into a lute. Brad the Bardbarian is not alone. Using notes that you generate every few seconds, call on your ranger, fighter, and spell caster friends to help you in your quest. As a bard, you can’t actually do much physical damage yourself. However, you can play a shredding riff on your lute to inspire your companions to fight harder, take hits better, and run faster.

The one move Brad can perform is an epic stun that freezes all nearby enemies for a few seconds so you can kill them before they kill you. Don’t worry, though: Brad’s buddies are capable adventurers and can handle the fight. The Archer flings arrows far and fast. The Brawler throws things at the enemy to knock them down. The Healer will replenish your health at the loss of her own. What a gal. There are 12 different units you can hire. Each one is unlocked at a different level.

To play the game, kill the bad guys, and earn gold, start by generating enough notes to hire your first companion. Notes generate over time. However, if you are standing still, they will generate much faster. You can hire three companions to fight with you at first. When you earn enough gold, you will be able to add more fighters to your party. I suggest doing so as soon as possible.

Once you’ve added all available party members, start moving toward the onslaught of enemies. Your fighters will do the physical work. It is your job to inspire them with your song of Attack, Defense, and Speed. Each increased upgrade increases your bard’s songs significantly. So, don’t forget to buy them whenever you have enough dough.

To move around, drag your finger across the screen to where you want your bard to move. The rest of the party will always follow Brad. As you attack enemies, be sure to keep out of the way of oncoming ammunitions. Some enemies throw red gems, others throw bat guano. It can get pretty messy out there.

Halfway through each section, or time of day, one bad boss will appear and make your life miserable for a while. If you somehow manage to kill him off, you will progress to the next wave. At the end of the section, you will also have to fight an even bigger and stronger boss. Once you’ve bashed that baddie out of existence, a chest of gold will drop that you can open once you’ve finished off the rest of the enemies that are milling about.

If your enemies reach the town crystal, they will start attacking it. It is a good idea to always check the bad guy tracker at the top of the screen. If any enemies have gotten past you, be sure to run them down before they reach the crystal. If the crystal is destroyed, you will die.

Every time you die you can upgrade your powers, weapons, and other items. Some items are worth saving up for, but don’t forget to keep your song stats high. The best purchase you can make at first is to buy a town pet. He will run after the gold that drops from bad guys so you don’t have to waste time chasing after it. Another good buy is the Town Drunk. He pukes all over the ground, slowing the enemies when they walk through it. I know, it’s gross, but that guy is a life saver. 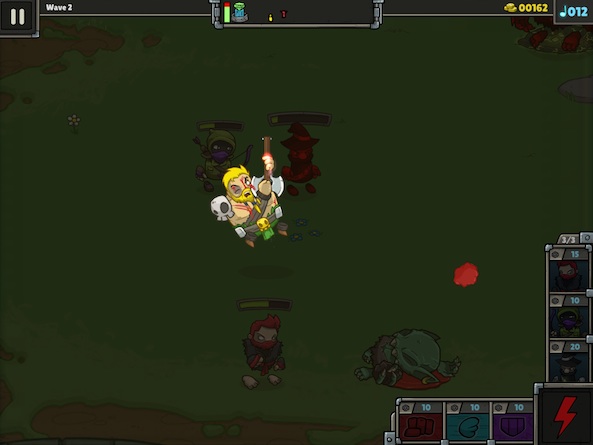 This is basically a castle defense game, disguised as a role-playing game. Players must take charge of a team of adventurers. However, the goal is to simply protect the town crystal. It is much more fun than I thought it would be.

I found the beginning levels to be just a bit too hard. I played the game for nearly two hours and only barely made it past the morning section. As you upgrade your stats and weapons, it gets easier to beat. However, I’d like it if the first section was a little easier to get through.

Bardbarian only costs $0.99. This game is full of clever antics and humorous visuals. The replay value is epically high, especially since you can’t even get very far unless you pimp out your Bard and companion fighters. Survival mode offers an upbeat change of pace if you start to get tired of the scenery.

Fans of castle defense game will enjoy this funny title. Fans of role-playing games can think of it as a mini game to distract you from the daily grind of MMOs. It is lots of fun, but definitely challenging. This game is available on the iPhone, iPad, and iPod touch. Download it in the App Store today.

Die for Metal is another fantasy game where you kill things with music. TheSlayers is a funny stick man themed castle defense game.

Does this humorous mashup sound interesting to you? Will you be inspiring your party with song this evening?