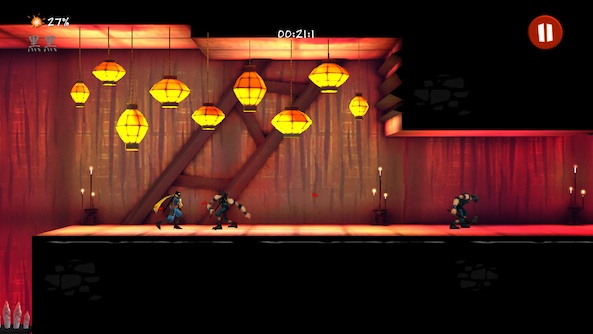 Platform gaming is one of my favorite genres. I love the mindless simplicity. When console devices were just starting to make their way into living rooms across America, platform games were the most prevalent style. I guess they remind me of my childhood.

Shadow Blade is a basic platform game, only not. That is to say, it has all of the elements you would want in a platformer, but takes it to the next level by being difficult to beat and even tougher to get all the items. That blue hedgehog doesn’t know what hard is…

This is a basic platform game. Players must jump across gaps, climb up steep walls, and kill bad guys, all while collecting coins and special symbols. It’s a pretty hectic gig.

The story takes place in different locations. The first chapter takes place inside a building filled with traps and bad guys. In other chapters, you’ll be on rooftops or out on the street.

Your little ninja runs, jumps, and slashes with amazing graphics. Some of his special moves include throwing a star on a chain to draw the enemy in, slitting bad guys throats by sneaking up behind them, and slashing them in half by getting a running start.

You can play the game with either gesture controls or traditional joystick controls. I tried them both and gesture controls are way harder than using the A/B and left/right buttons. Trust me.

As levels progress, so does the game’s difficulty. You may start off just killing bad guys, but as you complete levels and improve your skills, you’ll be jumping on moving platforms, avoiding spring-loaded spikes, and striking down snipers. 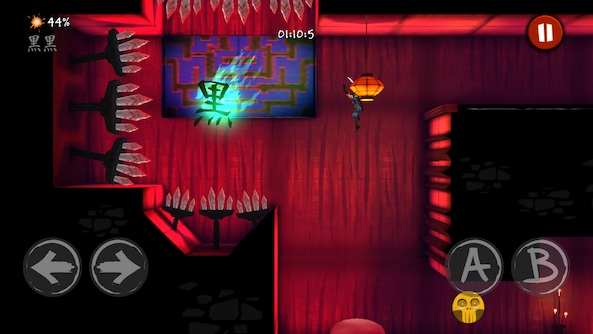 The game starts you off pretty easily, teaching you how to move and showing you how to perform certain attacks. When you are offered the option to play with gestures or joystick, I highly recommend going with joystick. The controls are way easier and this game is hard enough already without the added confusion of swiping and tapping to add to the mix.

The movement buttons are on the left side of the screen, while the A/B jump and attack buttons are on the right side of the screen. When jumping, you can get twice as high or far by tapping the jump button again in mid air. When attacking a bad guy, you can sneak up on him from behind and hit the attack button to slit his throat. Or, fight head on, even at a distance, by moving and attacking at the same time. Different combinations of jump, attack, and move will result in different finishing attacks on an enemy. If you strike from above, you’ll slice right through your foe.

You can run, jump, and climb walls with your ninja. To climb a wall, run up to it and jump. Then, while holding down the left or right move button (depending on which side the wall is on), tap the jump button over and over again until you’ve sprung your way to the top. Watch out for spikes. Some walls are covered in them, making it very difficult to safely climb.

The action is very fast paced. There are not many places where you can sit and rest and collect your thoughts. On any given level, you will have to time a sprint across spring-loaded swords that shoot out from the floor, or the ceiling, or both. Then, you’ll have to jump out of the way to avoid being shot by a sniper. After that, you’ll be jumping from one falling platform to the next before they drop into the spiked floor below. After all of this, there will probably be another group of bad guys, waiting to attack you just when you think you’ve landed safely on the other side.

If you do die, don’t worry. Your game will restart from the most recent checkpoint. You don’t receive penalties for dying or lose any lives. The only thing you will lose is the progress from the checkpoint until you died.

If you think the game is too easy, you can always try your skills in the “Hardcore” chapter. There are nine levels in the hyper difficult chapter that features further jumps, way more spikes, and ridiculous obstacles. I played the first level of Hardcore and was able to get to the first checkpoint. After that, I just gave up. Too hard. 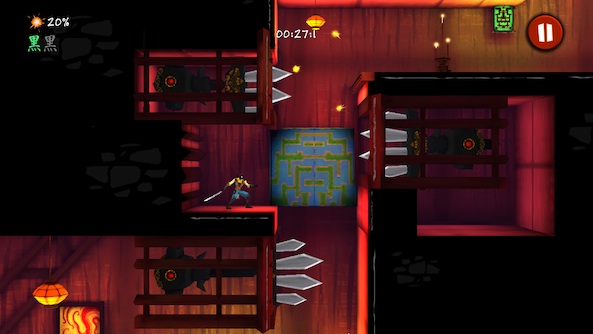 I had a blast playing this game. Even though it was frustratingly hard, I’d eventually make it to the end (although getting all of the goodies was oftentimes too much). The joy of getting though the obstacles against all odds was enough to keep me playing until my thumbs started to cramp up. Just like when I was a kid.

The only thing wrong with this game is that it is too short. There are 40 levels across four chapters. I want more. The game is too fun to put down, which means you get through the entire game so fast it leaves you wanting more.

Shadow Blade costs $1.99. Normally, I’d say that the price is a bit steep for a basic platformer. However, this game is definitely worth the money. The graphics are amazing. The game mechanics are fun. The controls work great. You will definitely get a good bang for your two bucks.

If you like platform games and are looking for something challenging, I highly suggest picking up this game. It is fun, exciting, and offers hours of fast-paced gameplay. This game is available on the iPhone, iPad, and iPod touch. Download it in the App Store today.

Swordigo is a fun platform game. Cordy 2 is another great platformer, and you can try it out for free.

What do you think of Shadow Blade? Do you think you’ll give it a try?