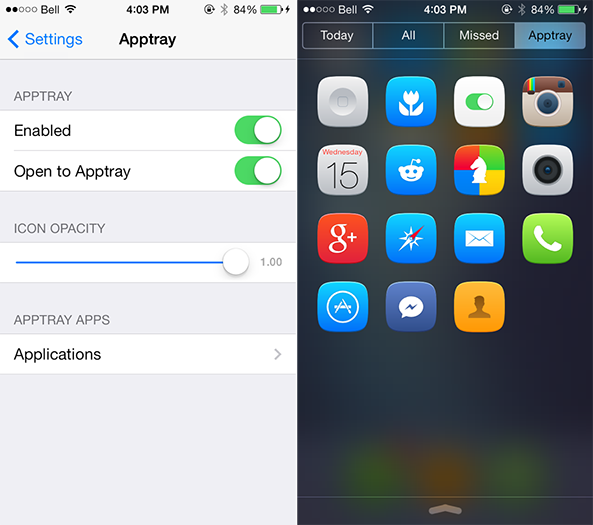 There have been a handful of jailbreak tweaks released for Notification Center in the past few weeks, but perhaps none more visually appealing than Apptray, by software engineer Joshua Lee Tucker.

The tweak, compatible with all iPhone, iPad and iPod touch devices, adds a fourth tab alongside Today, All and Missed in Notification Center for opening apps directly from the notifications pulldown. An unlimited number of apps can be added to Apptray, configurable from the tweak’s dedicated menu in the Settings app…

Apptray has a few other interesting options, including a slider for adjusting icon opacity and a toggle switch for enabling or disabling the tweak entirely. In order to ensure the security of iOS devices, the tweak cannot open apps from the Lock screen when a passcode is set. In that instance, tapping on an app icon will simply do nothing.

My impression of Apptray has been positive so far, as the tweak performs great on my iPhone 5 running iOS 7.0.4. As a bonus, it even works with themed icons. If you also have an iOS 7 device, Apptray can be yours on the Cydia Store for $1.49.

What are your favorite Notification Center tweaks?