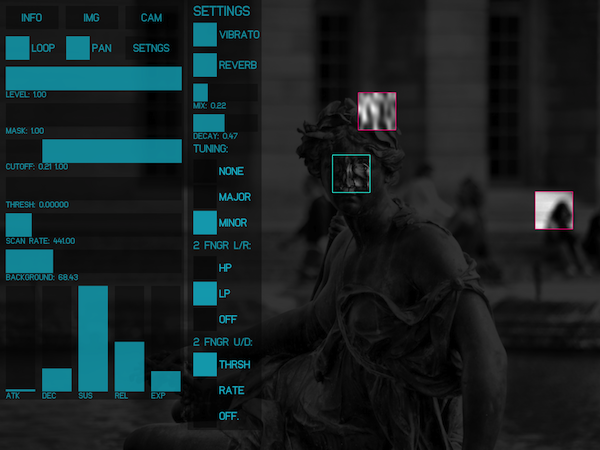 There’s certainly no shortage of music-creation apps for aspiring musicians on the App Store, even if most of the available programs strive to perhaps dumb down the process of composing music. But every once in a while someone out there comes up with another great idea for music creation on the go.

Although ImageSonification‘s new iPad app called Vosis is not meant to compete with the likes of Apple’s GarageBand and similar apps, I can easily see it used in the production and creation of live effects.

Now available in the App Store free of charge, Vosis creates cool ambient and synthesizer effects by analyzing greyscale image pixel data in your photos and live video feed. I’ve included a nice video after the break so do give it a look to learn what image and video “audification” is all about…

There are two ways to create the effects in Vosis (an acronym for Voice of Sisyphus Image Sonification): by using images in your Camera Roll or by performing real-time analysis of live video supplied by your device’s iSight or FaceTime camera.

Some of the key features include looping (double-tap to add a looped region), stereo panning depending on horizonal image position, low-pass and high-pass filters, a Lexicon emulation reverb mix and decay and frequency modulation by way of reading accelerometer sensor values, to mention just a few.

Vosis is capable of six-voice plyphonly (three touch regions and three looped regions) and can output your visual music performance to external projectors, with no fingers in the way of images.

To learn more about Vosis, hop over to the ImageSonification website.

Note: to show and hide the interface, double-tap in the upper-right corner.