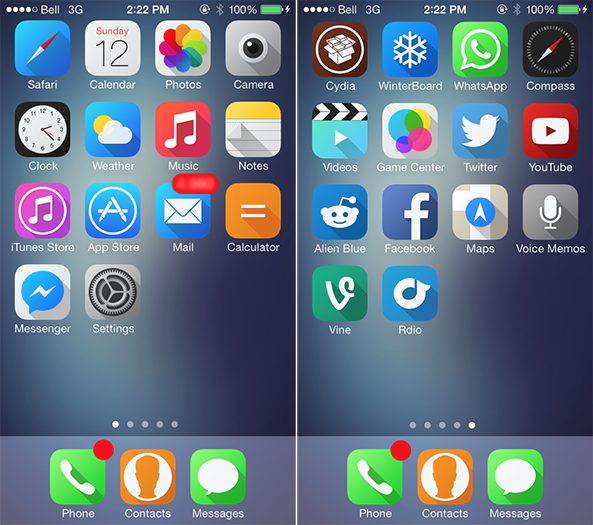 While the release of a Winterboard update with support for 64-bit devices is very exciting, the entire process of creating a theme has been fundamentally changed because of how iOS 7 is built. The move away from so-called “skeuomorphism” in favor of translucency and vector-based design creates additional barriers that theme makers didn’t face on iOS 6 and earlier…

One of those theme makers is Tim Collins, a renowned designer with an impressive portfolio that includes 1derful, 1Derland, Ezra and RocketSauce. Each of his themes are very complex in nature, skinning everything from the Phone app keypad to chat bubbles in Messages. The unfortunate reality, however, is that iOS 7 makes that process a lot more challenging and time consuming.

Collins elaborated on behalf of designers in a PSA of sorts:

Since Winterboard was just updated, I wanted to update everyone on the limitations themers are faced with on iOS 7. Apple changed almost everything to “masked” images when they abandoned the skeuomorphic style we’d all grown used to over the years. This means almost every UI image you see is a simple black “shape” that has a solid color applied to it via coding.

That’s how the chat bubbles, phone dialer buttons, et cetera are all displayed now. Even SpringBoard icons are different; we can’t add frames, effects, or shadows anymore. It’s a black masked “shape” with the icon’s graphics laid on top. Bottom line, don’t expect themes to look anything like they did before. A lot changed, but we’ll do our best to customize where we can.

iOS 6 was different in the sense that it had static images that could be themed skeuomorphically, allowing for a more complete theme experience. Moreover, according to Collins, apps that could “auto skin” icons like IconHarvester and ThemeIconMaker are now rendered useless on iOS 7.

The good news is that theming iOS systemwide is still possible, albeit with a different approach. We’ve already seen quite a lot of beautiful looking themes for both iOS 7 and the iPhone 5s, and we’ll be highlighting a few of those in the near future right here at iDownloadBlog.

Any suggestions? Also, for those wondering, here is the wallpaper used above.