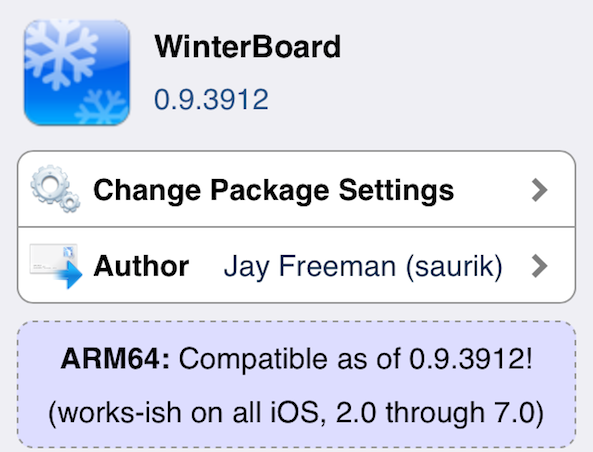 Themers and all around jailbreakers will be happy to learn that Winterboard, a staple in the jailbreak community when it comes to theming, has been updated to bring complete iOS 7 support, and maybe more importantly, support for arm64 devices such as the iPhone 5s, the new iPad Air and iPad mini with Retina display.

Although Winterboard worked fine in many cases for older devices running iOS 7, there were still bugs and inconsistencies. These problems should soon be a thing of the past now that Winterboard has been updated…

What does it mean for jailbreakers? Simply said, it means that jailbreakers will now be able to apply themes to any device without having to fear incompatibility.

Of course, there aren’t many, if any at all, themes currently available for arm64 devices so if you have an iPhone 5s, you’ll probably have to wait until designers come up with new themes or update existing ones. Surenix for example, recently said he was working on an Ayecon update.

Saurik notes that Winterboard version 0.9.3912 “seems” compatible with 64-bit devices. Judging by his careful choice of words, it appears that Winterboard might still be needing some work to squash bugs that could have gone unnoticed during development. But at this point, most of the job is done, and future updates will only bring stability improvements.