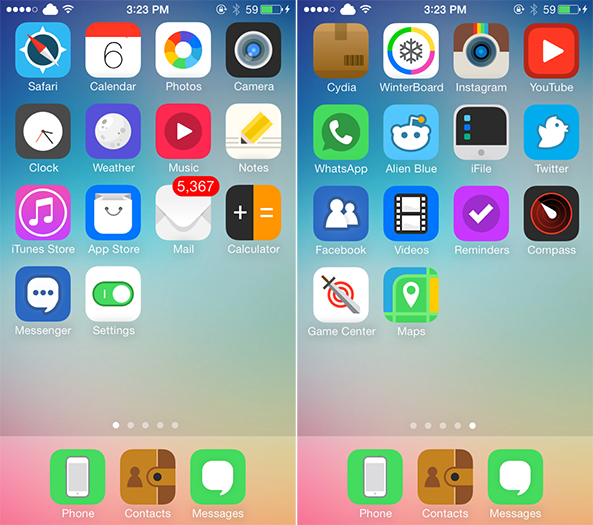 iOS 7 was the most controversial software update that Apple has ever released, primarily because it ushered in an all-new design that replaced detail and so-called “skeuomorphism” with flatness and simplicity. Fortunately, for those that don’t favor the stock look, the arrival of the evasi0n7 jailbreak opens the doors to a myriad of new themes to choose from. Space Blueberry, for instance, is a beautiful new icon set for the iPhone and iPod touch. Take a closer look for yourself ahead…

Space Blueberry provides themed icons for all stock applications minus a few, and for the most part I prefer the new designs over their original counterparts. In particular, the icons for Game Center, Music, Reminders and Safari look much better. The theme also has icons for a handful of popular third-party and jailbreak apps, including: Alien Blue, Cydia, Facebook, iFile, Instagram, Twitter, WhatsApp, WinterBoard and YouTube. The theme developer Gionata (@highdetalio) promises more icons by next week.

As this is a Winterboard theme, the iPhone 5s is not yet compatible. However, all hope is not lost. If you still want to have Space Blueberry on your A7 device, you simply need to manually install the icons using a program like iFile, iFunBox or iExplorer. I previously explained how to change the Cydia logo on iOS 7, and those instructions can be loosely followed to change other icons as well. Ensure that you backup your device to iTunes or iCloud before making any modifications to the iOS filesystem.

Space Blueberry is available for free on Cydia from the ModMyi repository and as a direct download at Dropbox. Version 1.1 has already been pushed with additional icons for Twitterrific, Tweetbot 3 and VKontakte, an update that should be live shortly. Unzip the theme file, use SSH to place it in /var/stash/themes/ and apply it with Winterboard if you are installing it manually.

What theme are you using on your iOS 7 device?