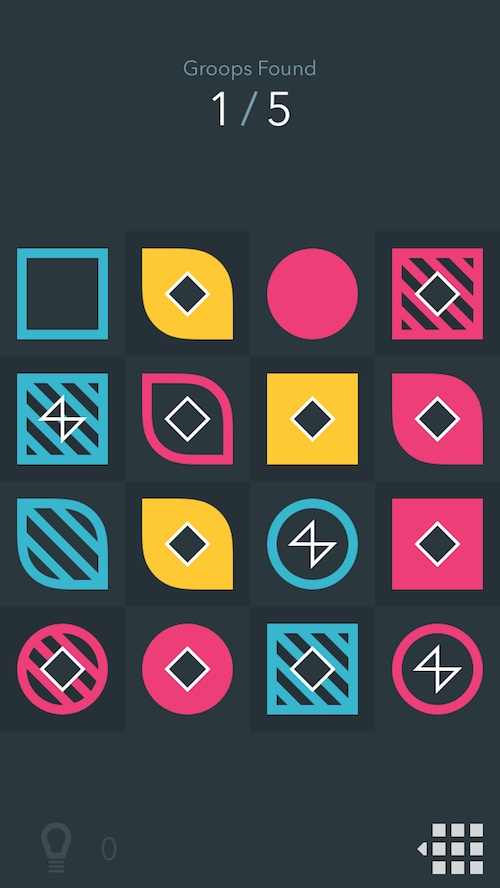 I have vivid memories of taking pattern recognition tests in school that were supposed to rate my intelligence. I was terrible at them. I never could understand how to figure out what the next logical pattern should be.

Groops is a matching game that is similar to the pattern games that haunted my dreams as a child. Only these patterns are easier to figure out and the results won’t make you look stupid to any teachers…

This is a very basic matching game. Players must match three colors, shapes, or patterns to get a “Groop.” The board will consist of anywhere from four to 16 tiles with a variety of shapes with different colors and patterns. The colors are pink, yellow, and blue. Some shapes are solid. Some are outlined. Some have a symbol in them. Some have stripes. Your job is to figure out which one can be grouped into a set.

There are two modes, normal and Time Attack. In normal mode, tiles are displayed in different orders. Sometimes there are only four tiles and sometimes there are 16. The number of shapes on the board is dependent on what level you are on and what the goal is.

In Time Attack, the board is filled with 16 tiles and players must make Groops as fast as possible within a certain period of time. The tiles are replaced as soon as a Groop is made so that you always have 16 shapes on the board. 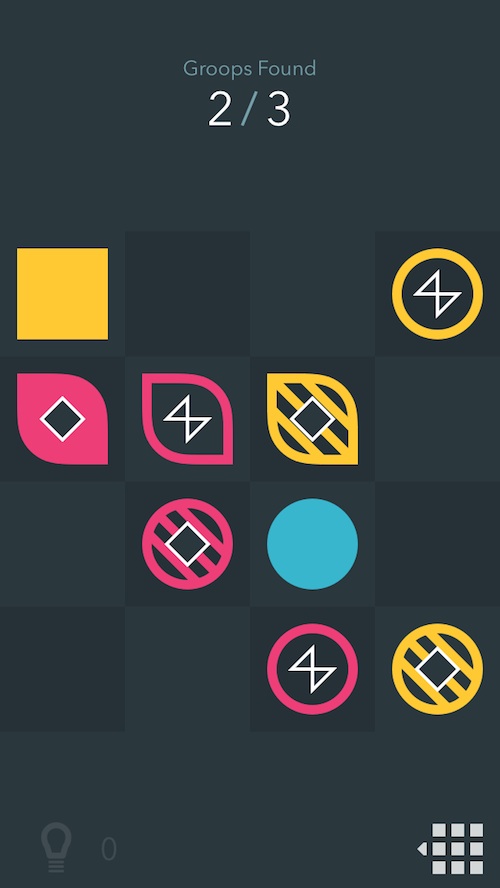 Players must make a Groop by matching three tiles. A tile may have a circle, square, or leaf shape. Each shape may be solid, striped, or outlined. Some shapes are blank and some have a symbol inside. There are also two different symbols.

Shapes don’t have to be touching in this match-three game. Instead, the match is made by the pattern. For example, if there are three identical shapes with the same color, pattern and symbol, they are a Groop, no matter where they are on the board.

Things start to get tricky after that. To make a Groop, two tiles cannot share a feature that the third does not. For example, you can’t combine two solid shapes and one outlined one if they are all the same color. Also, three tiles that are mostly different, but share one feature (like they are all solids), are Groops. Tiles that all have completely different features also count as a Groop.

Once you’ve completed the tutorial, you will be able to practice for a while by finding Groops on the board at random. Don’t get confused. That’s not the entire game. When you feel like you know what you are doing, tap the “I’m Ready” button and start the game.

In the normal game, there are 100 levels in four different groups. Each set is more difficult. They are all unlocked, so you don’t have to start with “Easy Peasy” if you don’t want to. You can begin on one of the harder levels if you are a pattern recognition expert.

As the levels get progressively more difficult, Groops will become harder to figure out. Well, harder for people like me who have never been good at this stuff. By the time I was on the second set of levels, the “Brainz Needed” level, I was getting a headache trying to figure out the pattern groups.

Time Attack mode is actually much simpler, in my opinion. You may have to work fast, but the patterns are much easier to pick out, at least at first. Players start with a grid of 16 tiles. At the beginning, they may all be the same color, but have different patterns, or they may all be solid colors, but have different shapes. As the game progresses, the similarities become harder to distinguish and matching differences will become the better strategy.

As you play the game, you will earn points that can be used to buy power ups. Power ups include tile shuffling and hints. Buy these helpful items to get you unstuck when you can’t figure out what the next Groop is. 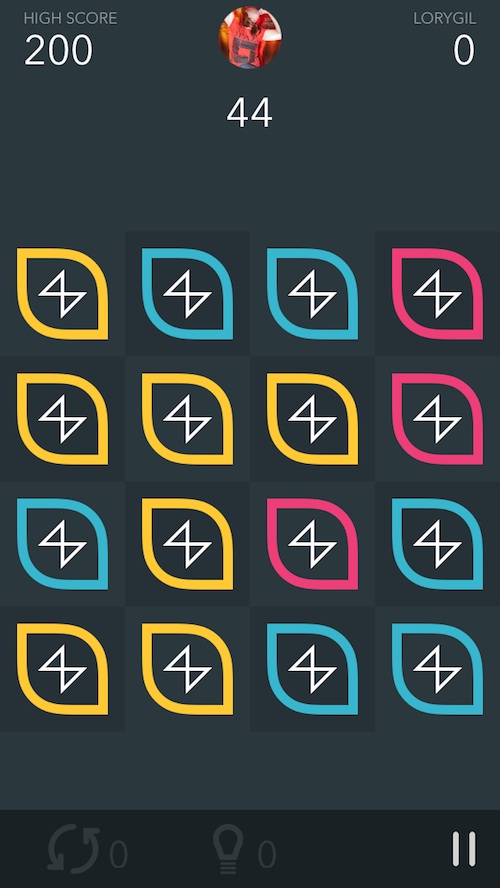 The game is very challenging and is great for keeping your brain working. Fans of pattern recognition puzzles will really get a kick out of figuring out the next logical Groop.

I never though it would bother me that a game doesn’t have a sound track, but apparently, it does. This game could really use some ambient music instead of just chimes and sound effects that are triggered when you tap a tile.

Groops is on sale for $0.99. At half off, the price is right. However, since there are only 100 levels in the normal gameplay, the full two-dollar price tag is a bit high. If you have any interest in this game, I recommend buying it before it goes up to full price.

I kind of hated this game, while loving it at the same time. It brought back memories of not being able to understand pattern attributes and I was pulling out my hair by the time I was done playing. However, I found myself going back again and again to try to get the next Groop, so it is obviously a great game, even if you failed all of your logic tests in high school. Download it in the App Store today.

Although less like games and more like brain exercise apps, Lumosity Mobile and Fit Brain Trainer have similar puzzle challenges.

Do you like pattern recognition puzzles? Do you think you will play Groops?